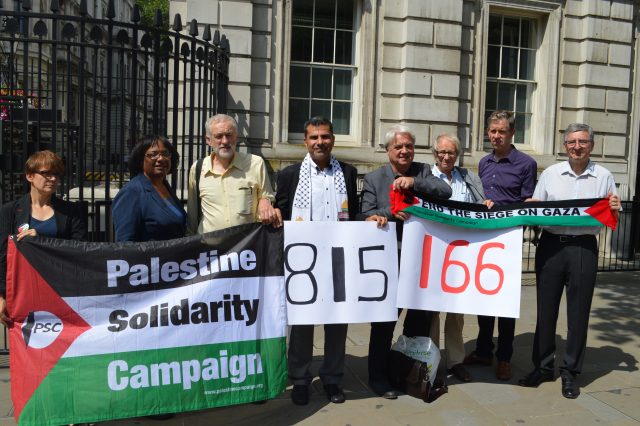 The acclaimed film director responds to recent allegations in The Guardian and New York Times that he gave “spurious legitimacy” to Holocaust denial.

Following recent allegations made against him by Jonathan Freedland in The Guardian and Howard Jacobson in the New York Times, and the refusal of these same newspapers to give him any opportunity to provide an adequate response, film director Ken Loach talks to Frank Barat of the Transnational Institute about Palestine and the ongoing attacks faced by anyone taking a stand for social justice.

Ken Loach: I think things move on. The play you talk about, Perdition, was written by Jim Allen, a wonderful socialist and great writer from Manchester — a working class man. He wrote this play about events that had happened in Hungary just before the end of World War II, when the Zionist Rudolph Kastner did a deal whereby some Jews would be allowed to escape and go on trains to settle in Palestine, and the others — hundreds of thousands in number — would be told to get on trains to the death camps, not knowing their final destination. The play was a discussion of that.

We were attacked for even approaching this subject. We were attacked for being anti-semitic, racist and endorsing blood libels that went back centuries. The play was censored by the Royal Court, which had a great reputation as the writers’ theater. Of course the people who came to our defense were Jews, as always. The people who saw the truth of what the play was about were Jews. They defended the play magnificently. Since then I have been in the firing line. And it seems now that anyone who stands up for the Palestinians will get abused — even though I think all people are doing is defending human rights, saying they apply to everyone and that the Palestinians are entitled to live in peace and security in their homes as much as anyone else.

It has gotten much tougher, and I think the problem has been that our governments collectively — the US, Britain and across Europe as well — have colluded in the oppression of the Palestinians by doing deals with Israel. Trade deals, of course, are the biggest issue. Cultural and sporting affairs as well. Israel even plays in European football contests! That’s bizarre. Egypt does not; Lebanon, Algeria, Morocco do not. Israel is in the Middle East. What is it doing in the European football competition, not to mention the European song contest? Many countries would pay a lot of money not to be in this contest. But the clue is in the name, European. Why is Israel there? We know the answer: it is part of cultural offensive to say that Israel really is a Western democracy.

Of course we know that Israel is breaking international law, the Geneva Conventions, stealing land that belongs to another people and making the lives of the Palestinians intolerable. But because the campaign against the Israeli illegality has gathered strength and because the boycott movement has done so too, there is now an offensive by Israel and its supporters in the West to outlaw discussions of a boycott, to vilify anyone who stands up for the Palestinians. So yes, it has gotten more difficult.

Right now, you have BDS activists being criminalized for supporting the boycott, you’ve got people like Moshe Machover being kicked out of the Labour Party for writing about anti-Zionism, you’ve got Roger Waters and yourself being accused of being anti-semites, and Tony Blair talking about alliances between the left and Islamists. Do you see a pattern here? Can you connect the dots?

Well, I think they are all part of this concerted campaign to make it unacceptable to criticize Israel. To draw a veil over Israel’s breaches of international law and to see criticism of Israel and Zionism as anti-semitic. The expulsion of Moshe Machover, a man of great integrity, an academic, from the Labour Party, the idea that he is anti-semitic is bizarre.

There is a pattern, though. You will often find that a liberal newspaper will fire the first shot, in quite moderate language, and then they open the door for the extremists to use the term anti-semitic. In this case, I was accused by Jonathan Freedland in The Guardian of giving “spurious legitimacy” to Holocaust denial. Of course I did not do anything of the kind. Somebody quoted another interview that somebody else had done; I didn’t know what had been said, I didn’t know what I was asked to defend or condemn, and I just made a generalization. And these words were twisted to suggest that I tolerated Holocaust denial. Of course I don’t. The Holocaust is a real historical event of World War II. But the idea that history cannot be discussed is wrong. The Holocaust is discussed at length continuously, and rightly so. Through museums, films, papers, books. As is the war, as is the rise of fascism and who supported fascism, which is discussed a bit less, because that implies talking about big businesses…

So the first shot is fired in quite moderate language, and then you get a piece which I have just discovered today, written by a Howard Jacobson, a British author, who wrote in the New York Times, that there is a “whiff of blood lust,” even from the Labour Party conference in Brighton. Phrases like blood lust are meant to be incendiary, provocative and bring rage against anybody who is nominated in these attacks. The most serious bit comes at the end, when this man says that “what needs to be insisted on is that Zionism — the idea, not the political events to which it has given rise — is integral to the Jewish mind and imagination. Those who say they are against Zionism but not Jews are speaking in riddles.” In other words: if you criticize Zionism, you are criticizing Jews and you are anti-semitic. Well, that is the most dangerous notion of all, and that’s chilling. Zionism was a nineteenth-century ideology as far as I know. But there were Jews before then, before Zionism. Did they not have a presence?

All of this is dangerous because Zionism leads to Israel, and criticizing Israel — not only its present policies but its very founding — then becomes anti-semitic. But of course many Jews in Israel and outside of Israel actually oppose Zionism, oppose what Israel is doing, and support the Palestinians. Jacobson writes that within such an ambience that is critical of Israel, “an anti-Zionist Israeli is a hero.” He is saying this ironically, of course. So he is trying to undermine even those brave people in Israel and outside of it who, from a Jewish background, are brave enough to speak out — they are to be condemned as well. This is how it moves forward a notch: first a moderate attack, and then a vicious attack.

How should we respond to what is going on? If this is an attack on solidarity, how do we rebuild and re-assert that solidarity?

You just have to tell the truth. Just tell the truth. A friend of yours and someone I have huge respect for is the Israeli historian Ilan Pappé. He describes in exact details, with great academic rigor, the removal of Palestinians in their hundreds of thousands from their own land and calls it the ethnic cleansing of Palestine. This is an historic event. When you look at the evidence it cannot be challenged. Next year, it will be 70 years since the founding of Israel. We have to assert that truth: Israel was founded on ethnic cleansing. We have to assert the reality of how Israel was founded and the consequences of these policies, which have continued ever since. We need to demand the rule of international law, of the Geneva Conventions. Just tell the truth.

In the end people will come to realize that support for the Palestinians is support for justice and for human rights. We have to organize, we have to demand that people support it, people who would consider themselves generally supportive of people living together in peace. We need to tell them that, now that they have the facts, how can they not support the Palestinians?

Frank Barat is coordinator of the War and Pacification program at the Transnational Institute. He has edited a few books, the latest being Freedom is a Constant Struggle with Angela Davis. He is part of Revue Ballast where this piece was also published (in French).