John Pilger: “I made this film to break a silence about nuclear war” 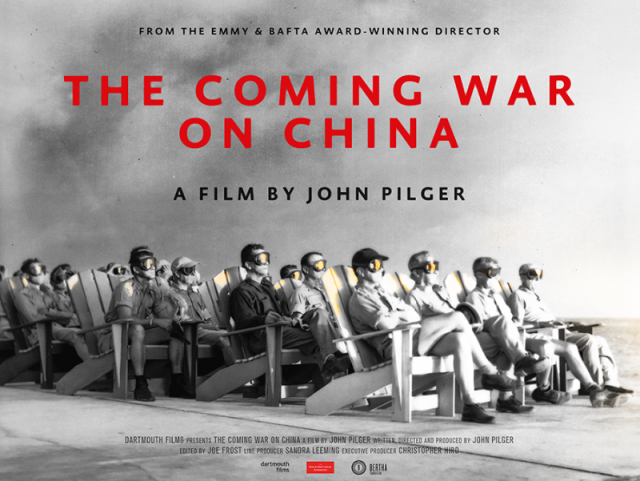 When he was a young journalist, John Pilger covered the Vietnam war for ten years. Since then, he has exposed what lies underneath many conflicts and has proven to be one of the most reliable analysts on the international politics arena as well as a talented filmmaker. As a sworn opponent to propaganda war, he has saluted whistleblowers’ action in exposing the ugly abuses that western governments have been committing with complicit silence or even support from the mainstream media. In this exclusive interview he kindly granted to Investig’Action, John Pilger tells us a bit about his new film “The Coming War on China”. He also warns us about the current dangers of a nuclear war unfolding that would threat the entire humankind…

On 5th December your new film “The coming war on China” will be shown for the first time in the UK. Can you tell us a bit about it ?

“The Coming War on China” describes the massive build-up of US air and naval forces in Asia and the Pacific, with China as their target. The film is as much about propaganda as it is about military provocation; the news tells us that China is threatening the peace of the region by building airstrips on islands in the South China Sea, but the news suppresses the fact that the US has encircled China with 400 military bases – missiles, planes, warships – in what one strategist describes as ‘a perfect noose’.

The film begins in the Marshall Islands, where the equivalent of one Hiroshima was tested every day for 12 years. It reveals a secret programme – project 4.1 – that turned an entire nation into guinea pigs. It’s here that the US has built one of its most secretive bases, commanding the Pacific all the way to China.

What was the main reason for making this film now?

“The Coming War on China” sets out to break a silence about nuclear war which, to military planners, is no longer unimaginable but a ‘contingency’; it describes a new cold war in which the ‘frontlines’ are no longer defined as they were in the old cold war, and the risks and dangers are unrecognised and greater.

Along with China, Russia seems to be a major target. Can you comment on the British judges’ decision of closing RT’s bank accounts, as well as the recent European Parliament resolution to counter Russian media that put it on the same level as terrorist groups’ propaganda ?

It seems the decision to close the RT accounts was made by the bank, perhaps fearful that it would be subject to fines for ‘breaking sanctions’ against Russia. However, RT has since been told that the decision is under review and there is no immediate threat to its accounts. Both episodes are part of the anti-Russia hysteria promoted by the EU and the Obama administration.

You recently said during a conference that “a world war has already begun …it is a propaganda war”. What could people do in the information battlefield?

What people should do is come together in a great movement that demands that their governments stop plundering and attacking other countries. They ought not to be distracted by the politics of introspection – ‘identity politics’ – and by the false realities of a media that is now an extension of the rapacious power exercised by Washington, Paris, Brussels, London.

Trump’s election has generated a strong debate in the US and also in Europe. Even some analysts amongst the left wing have welcomed Trump’s announcements of appeasement policies towards Russia. Do you share their optimism?

“Appeasement” is a cold war propaganda term. Actually there is another kind of appeasement : too many people in Europe and the US appease their own governments’ reckless warmongering. When last year’s Paris atrocity happened, Hollande sent warplanes to bomb Syria, and another atrocity happened, almost certainly as a consequence.

Could Trump be less of a warmonger than Clinton ?

We should not be concerned about those who make peace between Russia and Europe, as long as peace is made. The alternative is war, possibly nuclear war.

Many people now fear seeing a similar “political earthquake” in countries like France, where “Front National” could reach the Elysée in 2017…

If Front National claims the Elysee in 2017, who will be largely to blame?  “Liberals”, those people that often call themselves “the left”. They might look in the mirror; it is they who have mounted no enduring movement opposing the austerity and war-mongering of the government. Libya was destroyed by Sarkozy’s bombers and Clinton’s bombers and Cameron’s bombers.

With Gaddafi murdered and his modern state in ruins, Libya’s arms flooded south; Hollande’s reaction was to send more bombers – and troops – to Mali. This war-mongering stupidity and Libya’s wilful destruction opened the gates to a stampede of migrants and refugees from Africa. The so-called “migration crisis” in Europe is principally a consequence of the West’s assaults on fragile, tribal societies. Where was the opposition to these crimes among those now wringing their hands about Le Pen and Trump?

“The Coming War on China” will open in UK cinemas on 5th December and is broadcast on the ITV Network on 6th December. It will be shown in the US, Latin America and Australia next year. They are currently seeking a distributor in Europe. To organize a screening: http://thecomingwarmovie.com/contact