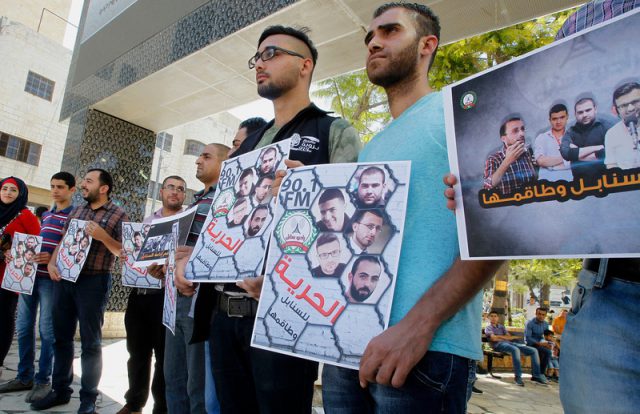 As of 1 December, there were 259 journalists jailed worldwide, according to the annual census conducted by the Committee to Protect Journalists (CPJ) – the highest number on record.

By far the largest group, 81 journalists, are detained in Turkey, followed by China (38) and Egypt (25).

Israel is holding 7 journalists, according to CPJ, which puts it on a par with Syria and Bahrain, just behind Iran (8) and ahead of Saudi Arabia (6).

Among those currently detained is Omar Nazzal, who was arrested by the Israeli military in April at the crossing between the occupied West Bank and Jordan as he was en route to a meeting of the European Federation of Journalists in Sarajevo.

Since then, Nazzal has been held without charge or trial. “In the weeks before his arrest, Nazzal shared statements on Facebook criticizing Israel’s crackdown on Palestinian media, including the closure of Palestine Today, an Islamic Jihad-affiliated TV channel” that was raided and shut down by the Israeli army in March 2016, according to CPJ.

Four of the journalists currently detained by Israel are Ahmad Darawish, Muhammad Imran, Muntasir Nassar and Nidal Amro, who work for al-Sanabel Radio. All were arrested by Israeli forces during night raids on their homes on 31 August in the occupied West Bank village of Dura, near Hebron.

The Israeli military indicted the men for “incitement” – an accusation frequently leveled at Palestinian journalists, social media users and even university professors and poets who express criticism of or report on Israel’s occupation.

According to CPJ, examples of such alleged incitement cited by Israel included live reporting on night raids by the army and playing certain songs.

“No examples of employees using language that directly incited imminent violence are provided in the indictment,” CPJ states, but there were examples of the lyrics of songs aired by al-Sanabel Radio that the Israeli military called “incendiary.”

The two other currently detained journalists named by CPJ are Adib al-Atrash, a writer for the online publication Palestine Post, who has been held without charge since July, and Ali al-Iwiwe, an on-air host for Palestinian Radio 4, arrested from his home in Hebron in October 2015.

“On the evening of al-Iwiwe’s arrest, Radio 4 covered the shooting of Bashar and Hussam al-Jabari, teenage cousins who were killed by the [Israeli army] in Hebron after a soldier was wounded,” CPJ states. “Israeli authorities circulated images showing the bodies of the boys next to knives. Palestinian residents disputed the authenticity of the images, saying the knives had been planted.”

Human rights investigators reported that the two boys had been seeking Israeli soldiers’ help to let them pass through a checkpoint to go home when they were shot dead.

Jailed for attending a conference

CPJ acknowledges that its census is “a snapshot of those incarcerated” on 1 December and therefore “does not include the many journalists imprisoned and released throughout the year.”

Since then a number have been released, including Samah Dweik, who completed nearly six months in prison in September for writing a status and sharing an image on her Facebook page in support of Palestinians who had recently been slain by Israeli forces.

Sami al-Saai, a correspondent for Alfajer TV, was arrested in March and spent 9 months in prison, accused by Israel of “incitement” on Facebook.

Mujahid al-Saadi, a correspondent for Palestine Today TV, was arrested in the West Bank town of Jenin in January 2016. In July, an Israeli military court sentenced him to seven months in prison and a fine of $1,300.

Al-Saadi, who reportedly suffers from multiple health problems, had previously spent a total of five years in Israeli prisons.

But at least one other media worker who remains in Israeli custody is not on CPJ’s list of those currently detained.

Hassan Safadi, 24, was arrested on 1 May while returning to the West Bank from an Arab youth conference in Tunisia, via Jordan. He was harshly interrogated for 40 days.

Safadi is the Arabic media coordinator for Addameer. Colleagues and friends had expected him to be released this month.

But instead, Israeli authorities extended his detention without charge for another six months.

Fear of the truth

In 2014, Israel was the second most lethal country in the world for journalists after Syria. At least 15 media workers were killed during Israel’s assault on Gaza that summer, seven of them while they were on the job.

“You might think that Israel, allegedly the most democratic state in the Middle East, would allow freedom of expression, but its violations of press freedoms are alarming,” Gaza journalist Mohammed Omer, currently in the United States, told The Electronic Intifada. “Attacking journalists and media crews is the act of cowards. No one should fear the truth.”

Palestinian journalists also continue to face harassment or arrest by the Palestinian Authority in the occupied West Bank and Hamas authorities in Gaza.

Among the seven journalists CPJ lists as detained in Syria is blogger Tal al-Mallohi, who was arrested in 2009. In February 2011, she was sentenced to five years in prison by a state security court, allegedly for disclosing state secrets, but was ordered released in October 2013.

Al-Mallohi was never released, however. “It is not clear why al-Mallohi remains in custody despite the court order for her release,” CPJ states. “Her sentence would have expired by early 2016.”

CPJ adds that al-Mallohi’s blog “was devoted to Palestinian rights and was critical of Israeli policies. It also discussed the frustrations of Arab citizens with their governments and what she perceived to be the stagnation of the Arab world.”

Cover photo: Palestinian journalists take part in a protest on 10 September in Hebron, demanding the release of their colleagues from al-Sanabel Radio, who were detained by Israel the previous month. (Wisam Hashlamoun, APA Images)