Is There a Drugs War in Latin America? 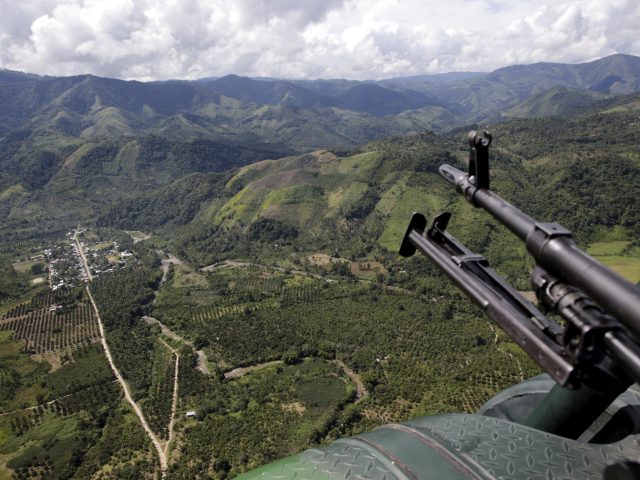 The war on drugs has been a disastrous failure – at immense cost – since its introduction in the 1970s but the opportunities it presents are central to US strategy in Latin America.

In 1971, while still embroiled in Vietnam, President Richard Nixon announced a new war. This one was not against an ideology or regime, but a collection of inanimate substances. Nixon’s war would be one of the defining planks of domestic and foreign policy during the next 45 years, and it goes on.

By the late 1980s, seven Latin American or Caribbean countries accounted for the vast majority of all marijuana, cocaine and heroin that illegally entered the US. The region has been the centre for War on Drugs foreign policy.

Since the early 1970s, the US has spent upwards of a $1 trillion and seen thousands of people killed in the fight to eradicate production. The U.S. federal government spent over $15 billion dollars in 2010 on the War on Drugs, at a rate of about $500 per second.

In 1986, President Reagan had formalised the program with the Anti-Drug Abuse Act and even during the Cold War, the problem was more concerning to the US population than any other. In an article written in 1988, Bruce Michael Bagley notes that: ‘Control of drug trafficking ranks higher than immigration, foreign debt, and communist expansion in Central America as a priority issue in US-Latin American relations.’

These attitudes, in the context of the still-ongoing Cold War, reflected decades of intense propaganda by the state and, following it loyally, the majority of the US media. But why was such effort put into promoting the War on Drugs by the political class? Was it just concern about the prevalence of drugs consumption and production? Or were there deeper causes?

Whatever the answers, after nearly 50 years of the Nixonian War on Drugs barely anyone says it has been a success. ‘Despite the increases in resources, manpower, drug seizures, and arrests, however, no one in the US government can realistically claim that the war on drugs is being won,’ notes Bagley.

In Washington, most will say privately that the policy doesn’t work and is too expensive. ‘I’ve been struck by the criticism when speaking in private conversations with members of Congress who are perceived as hardliners on the drug war,’ Michael Shiftner, an analyst in Washington DC, told me. ‘But they don’t want to be caught in position that says this is a failure when they don’t have an alternative.’

This explains why it continues to be financed at such high levels, yet can point to very few successes on its own terms. As Figueredo has put it: ‘The mobilization of an external threat, real or fictitious, and the belief in its intrinsic superiority have historically been important aspects of the discourse of U.S. policy.’ So with the War on Drugs.

The successes are actually largely unknown, and for a reason. They largely revolve around destabilisation of governments and popular movements under the guise of the War on Drugs – results far away from the surface rationales offered by Washington and the War on Drugs ideological supporters.

Academic work by Peter Dale Scott and Alfred W. McCoy has actually documented the networks of the global drugs industry and the participation in it of the Central Intelligence Agency (CIA). In the Latin American context, this was most clearly elucidated in the Kerry Committee report (named for then-Senator John Kerry) which investigated the drug laundering network throughout Latin America and the Caribbean and its implications for US foreign policy.

It is clear economic aid has always been an essential instrument for US strategy. In this context, the Colombia Plan and its successor, the Patriot Plan, as well as the Merida Initiative, should not be seen as drugs-related but rather tools for protecting US and related interests. ‘This process is part of a complex and dangerous dynamic of stabilization-destabilization in which participating Latin American governments play an essential role,’ notes Mariana Ortega Breña.

The War on Drugs use as an imperial stratagem that revolves around the militarisation and securitisation of the region is reflected by the ebbing and flowing of resources as and when it seems to move away from US orbit. The 1980s under Reagan and the ‘threat’ of Communism in Central America saw a huge uptick in resources assigned to the programme. Since 1999, with the advent of Hugo Chávez in Venezuela, and then more independent leaders arising in Honduras, Bolivia, Ecuador, Brazil and Argentina, US hegemony in the region came under significant strain. Resources to fight ‘drugs’, the vast majority of the money going to military purchases, ramped up again, particularly in Plan Colombia (which began in 2000) and then the Merida Initiative (2006).

The US War on Drugs in Latin America is part of a package that is bequeathed on countries that reside in the orbit of US power. In countries where leaders and governments have arisen that are opposed to US programmes in the region, often the DEA and other agencies involved in the War on Drugs have been expelled. In 2008, two years after he came to power, President Evo Morales of Bolivia expelled the DEA from his country. Coca production subsequently fell.

On a local level, the economic and political elites (that tends to be a tautology in Latin America) have used the War on Drugs to shore up their power domestically as well as use the resources to damp popular unrest. Local elites have also worked to allow multinational corporations and local corporations have the ability to discipline dissident and recalcitrant populations around mineral sites.

The other element of the capital-accumulation consideration is the transnational corporations (largely US-based) who give products and services to carry out staples of the War on Drugs programme. The emblematic example is Monsanto and Syngenta’s production of the defoliants that were sprayed over parts of Colombia with the intention of destroying coca crops. The locations of the spraying would indicate that considerations about the locations of the FARC have some influence. But this policy, while proving largely ineffective for years, was only brought to a close recently. Part of that is the Drug War Military-Industrial Complex, which rewarded companies like Monsanto and Syngenta with significant contracts in order to carry out the tasks.