Is America Trying to Go to War With Syria? 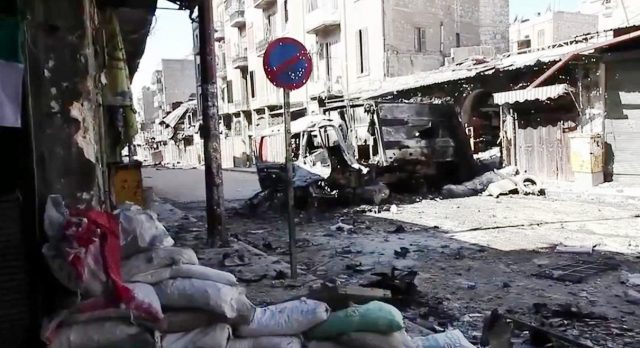 Officials will pretend they’re doing so in the interest of human rights, but it’s only about power.

As if out of nowhere, a Russian General announces that if the United States strikes Central Damascus (Syria) with an aerial attack, the Russians would retaliate.

In meetings, the Syrian government’s officials routinely told the Russians and the Iranians that they would triumph in this war. Negotiations became difficult because it now appeared that there would barely be enough Syrian opposition leaders to fill the chairs on the other side of the table. There was serious disagreement amongst these allies, with the Russians being most focused on getting a political path laid out between the Syrian government and the various Syrian opposition groups (except the hardened extremists, now largely encircled in Idlib).

It is at this moment that the conversation about chemical weapons is back on the table. An unpublished United Nations report suggests the trade in chemical weapons between North Korea and Syria. What has come out of the report indicates that the evidence from this comes from a Western country that does not want to reveal its identity. It makes the report rather fishy. There are also claims about the use of chemical weapons in the current phase of the war. It is this that might provide the pretext for a quick bombing raid by the United States on Damascus. In April 2017, the Trump administration launched cruise missiles at Syrian government targets. They said it was in retaliation for the use of chemical weapons. US Commerce Secretary Wilbur Ross intimated that the strike was ‘after dinner entertainment’. There appeared to be a great deal of cynicism around the 2017 strike. Nothing was said of it later.

Valery Gerasimov, the head of Russia’s General Staff, warned that the US might indeed launch an attack on Syrian government targets in the next few weeks, if not days. He said that the rebels in the enclave of eastern Ghouta, where the fighting has been very bitter, would ‘fake a chemical attack’ to provoke aerial support from the United States. Right now, these rebels face an asymmetrical force – the Syrian air force commands the skies. The toll on civilians has been significant. Gerasimov warned the United States that if there was such a strike, and if a Russian were to be killed, then Russia would retaliate against US targets. This was a very blunt warning.

Gerasimov spoke the next day to US Joint Chief of Staff head General Joseph Dunford. The two generals only said in public that they would continue to maintain their channels of communication. It is likely that they gave each other assurances against any such belligerent action. But this is not confirmed.

Close observers of the conflict in Damascus and Beirut say that they worry now about an attack given the loose cannons in charge of US policy making. Rex Tillerson, for all his flaws, was at least a practical person. Now the triumvirate in charge – Trump, Pompeo and Haley – are ideologues with little understanding of the region and this war. To get to Iran, which is Pompeo’s obsession, the US might be very willing to weaken further the Syrian government and strengthen some of its allies. Better to keep this war going, in other words, then to allow the Iranians to have a victory. The US was unable to stop the Iranians from building a land bridge from Tehran to Lebanon, which will allow the Iranians to resupply Hezbollah when necessary. Pompeo would like to break that bridge. An attack on Damascus might be his means.

Trump has been talking to his Western allies – France, Germany and the UK – about Syria recently. Merkel and Trump, in March, said that the ceasefire must be honoured (UN Resolution 2401). Macron and Trump, in February, said that the ‘red lines’ (namely use of chemical weapons) are being tested by the Syrian government. These sorts of statements are trial balloons. Macron had already said – just after his election – that if chemical weapons were used in Syria, then he promised ‘retaliation and an immediate response’. This was a ‘very clear red line’.

That these leaders focus on chemical weapons is telling. It means that they have no problem with conventional weapons and with the character of the war in Syria. They would like to reserve the right to strike at a time of their choosing, perhaps to increase their currently weak diplomatic position.

Today, in Astana, the Iranians, Russians and Turks meet. They are talking about Syria. It is now familiar to have outsiders discuss the fate of Syria. I am told that the meeting will cement a deal between these parties. Turkey, which is set to enter Afrin – the bastion of the Syrian Kurdish region, will be told that neither the Russians nor Iranians nor indeed the Syrian army will interfere with its plans for northern Syria. In return, the Russians and Iranians will receive a guarantee from Turkey that it will not even allow – as one person told me – ‘a bottle of water’ to go from Turkey to Idlib when the Syrian government begins its assault on that city. Turkey, which had long provided support to those very rebels, will have to watch them be destroyed later this year. What this will mean is that the Syrian Kurdish resistance – supposedly backed by the United States – will be destroyed and so will the Turkish and Gulf Arab backed fighters now in Idlib. These two occurrences will offer an advantage to Syria if the Turks, after weakening the Syrian Kurdish ambitions, withdraw back to Turkey. Then the Syrian government can claim nominal sovereignty over its territory.

A bombing raid by the West on Damascus would weaken the Syrian government and force the West to a seat on the negotiation table. This would not help the opposition, which has been set aside. Nor will it reopen the idea that ‘Assad must go’. A Western bombing run would simply be about getting the West into Syria as a player and not allowing the country to be either a Russian/Iranian proxy or having an independent path. That would be the reason for a Western bombing run. Chemical weapons would merely be the pretext for such an action. It is not liberalism that motivates these considerations. It is power.

From war in Syria to bombing in Somalia, we are witnessing the division of humanity