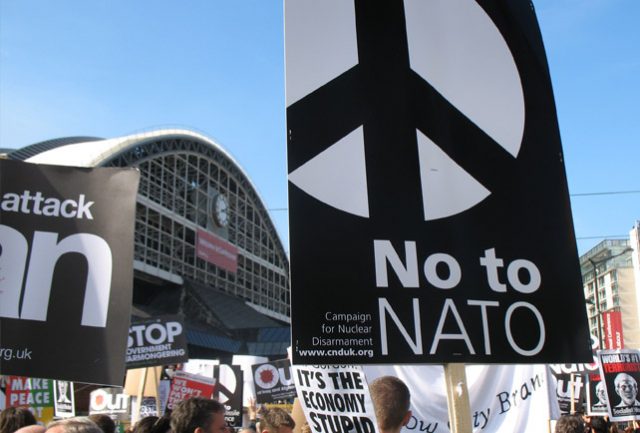 For the first time in the history of humanity, the technical means are at hand to eliminate poverty if resources were not diverted to making war. World hunger could be abolished with only a small diversion from military budgets. The only luxuries that so-called middle-class Americans would have to forego would be the Blue Angels air show and drone-bombing wedding parties in the Middle East. Yet, military spending is expanding, and with it global poverty.

On November 16-18, some 300 peace activists representing over 35 countries gathered in Dublin, Ireland for the first International Conference Against US/NATO Military Bases to address this tragic paradox of the technical ability to serve humanity and the political proclivity by the ruling circles in the West to do the opposite. Roger Cole of the Irish peace organization PANA identified the twin threats to humankind of global warming and global war, both driven by accelerating militarization.

Ajamu Baraka of the US-based Black Alliance for Peace highlighted the reactionary role of the US and its allies, which have by far the largest military expenditures in the world. The material basis for the absence of peace and the accelerating proliferation of military bases, in his words, is US imperialism.

Guantánamo was the first of the world network of US foreign military bases, according to keynote speaker Dr. Aleida Guevara from Cuba, daughter of Che. Cuba opposes this violation of national sovereignty. Today the US possesses some 1000 foreign military bases with troops stationed in over 170 countries.

David Webb of the Campaign for Nuclear Disarmament in the UK explained that the US is the only nation with nuclear weapons based outside its soil. US policy is to develop “usable” nuclear weapons in an enhanced first-strike capacity. Missile defense, he reproved, is the shield for the sword of nuclear weapons. The purpose of missile defense is to protect the aggressor against the inevitable retaliation after a first nuclear strike.

Margaret Flowers of Popular Resistance reported that the recent US midterm elections brought in more Congressional representatives with military or security state backgrounds. The duopoly of the two US “war parties” is united in supporting an accelerated arms race. Well over half of the US government’s discretionary budget now goes to the military.

Unlike so much liberal and progressive political discourse in the US, which is obsessed with the personality of President Trump, the international perspective of this conference penetrated that distracting fog and concentrated on the continuity of US militarism regardless of who sits in the Oval Office.

The session on the environmental and health impacts featured testimony on the toxic effects of military bases in Okinawa, Czech Republic, and Turkey. The US Department of Defense is the world’s largest polluter.

National Coordinator of the Irish Trade Union Federation and Secretary of the People’s Movement, Frank Keoghan, described the transformation of the European Union (EU) into a war project with the recent rush to create a single EU army. Ilda Figueiredo from the Portuguese Council for Peace and Cooperation and another activist from France warned that the drive for an EU army would transform all national military bases into NATO bases and would in effect allow “nuclear bomb sharing.”

Margaret Kimberley of the Black Agenda Report chaired the Africa session. South African Chris Matlhako and Kenyan Ann Atambo discussed the dependency of African states on foreign aid, which is used as a tool to facilitate the occupation of Africa by foreign militaries.

Paul Pumphrey of Friends of the Congo described the development of US strategy in Africa, which has used African proxies to allow domination and extraction of valuable resources such as coltan from the Congo. Now the strategy also includes direct occupation by the US military. George W. Bush established AFRICOM in 2008 with just a single acknowledged US military base on the continent, followed by an explosion to some 50 bases and a military presence in practically every African nation under Obama.

The session on Latin America and the Caribbean outlined the immediate threat of military intervention in Venezuela, caught in the crosshairs of US imperialism. Veteran Cuban peace activist Silvio Platero of MOVPAZ condemned the continuing US blockade of Cuba and the colonial status of Puerto Rico. Speakers from Colombia (now a NATO partner), Argentina, and Brazil reported that their right-wing governments are cooperating militarily with the US.

Nobel Peace Prize laureate Mairead Maguire from Ireland made an impassioned plea for all-out support of WikiLeaks whistleblower Julian Assange, “our hero of truth,” lest he die in a US prison.

The conference concluded on a high note of unity among the international peace forces. Conference coordinator Bahman Azad of the World Peace Council closed with a call to first educate and then mobilize.

Actions are being planned in Washington, D.C., around the 70th anniversary of NATO on April 4th. Coincidentally that is the date of the assassination of Martin Luther King and of his famous speech a year before when he presciently admonished, “the greatest purveyor of violence in the world today is my own government.”

Roger Harris is on the board of the 33-year-old anti-imperialist human rights organization, Task Force on the Americas (taskforceamericas.org), and is active with the Campaign to End US-Canadian Sanctions Against Venezuela (https://tinyurl.com/yd4ptxkx).