“In the US Prison Industrial Complex, slavery can be used as form of punishment”

The 31st july a group of incarcerated people at Scotland Correctional, North Carolina started a hunger strike in order to protest against the use of torture in the correctional facility. In the United States, there are more than 2 million people incarcerated. To know more about the hunger strikers’ conditions, Alex Anfruns has interviewed a member of the Incarcerated Workers Organizing Committee.

How many incarcerated people are taking this action ?

To my knowledge, the hunger strike began with an estimated 6 people on July 31st. The razor wire plantation masters, aka authorities have acted worse than even expected. They have flat out denied that the prisoners’ rights have been violated and have completely lied stating that there is no such hunger strike occurring.

This is a typical story though, the authorities lie all of the time, and everybody knows that. Just ask anyone who has a loved one behind bars. Scotland Correctional even goes so far as to state that the prisoners are “treated well”.

Could you please tell us about those torture complaints ?

– “Only 1 hour of recreation. Without proper exercise, fresh air, and movement an individual develops a mentality like a caged animal. She and the admins here have created a very hostile environment and seem to enjoy it. ”  (1)

-“Does anyone have any loved ones at Scotland Correctional Institution in North Carolina? I do, and out of all of the ones my son has been too this one is the pit of hell.” (2)

-” The other picture is of a correctional officer from Scotland Correctional Institute, in Laurinburg, that reads “Feeling cute…might spray ya baby daddy.” (4)

Have you got any support from other organizations ? And how is the local media reacting to the hunger strike?

There have been so many supporters it has been overwhelming! Just to name a few: Perilous Chronicle, San Francisco Bay View, Unheard Voices O.T.C.J., Solitary Watch, PANIC – Prison Abolitionists of Nassau Inciting Change, DSA.

Local media has been receptive to getting the perspective of those incarcerated and facing the direct repression. People faced with incarceration are more than capable of representing themselves and sharing with us the atrocities that occur daily inside these razor wire plantations. However, correspondence between those taking part in this hunger strike has been non existent. They are all being held in the Security Housing Units (SHU aka solitary confinement) where they are already not allowed any phone calls and as a further hindrance their mail has been intercepted. Several letters have been sent in to some of these hunger strikers and there has yet to be a response since the hunger strike began on July 31st. At this point, family and friends are extremely concerned about the hunger strikers’ health and the retaliation that they are obviously faced with. They have been put on lockdown and have been severely beaten. All for protesting non violently in attempts to expose the administration’s violations.

We should all remember a hunger strike is a form of protest in which one person sacrifices their own well-being for the well-being of the whole, truly such an earnest display of empathy and humanity by the prisoners unites them all. The monsters continue to be the prison administration and its employees who have refused to give us any updates on the conditions of the hunger strikers.

Hunger strike or not, Scotland leaves families in the dark as far as the health and whereabouts of their loved ones caged inside. This is a story most people with loved ones inside can relate to. When one hears about a stabbing inside or dead prisoner without further identifying information, naturally wouldn’t you call in concerned to know if it was your child, significant other, or parent? Most often, administration will straight away hang up in your face. This is no surprise to those directly impacted by this horrific prison industrial complex.

We know there is a profit-making approach in US prisons. How would you define the workers conditions in the US state prisons ?

Here in the South, there are a number of states that do not pay a dime to the prisoners for their labor. This is straight up slavery. However, for those states that do pay the prisoners cents to a dollar an hour, this is also slavery as making a few cents is a joke in this day and age. Especially when these people are being forced to work days on end just to have basic needs like toothpaste and hygiene products. The prices of these items on commissary are exorbitant and made inaccessible to most already impoverished undeserved populations such as the many who have experienced the school to prison pipeline or are victims of a white supremacist society who already suffer constant profiling, policing, and harassment directed at those living in communities below the national poverty level.

Here in North Carolina, there is a further restrictive factor to saving up money to afford basic necessities in the prison commissary: In February, an abrupt law came into effect in which the only visitors you can have and the only people who can put money on your books are immediate family members. For those with no support from their immediate family, this leaves them no choice but to be without hygiene products, health care, food, or phone calls but also forces them into this slave labor. As we all know by now, the 13th amendment has long since legalized slavery in the U.S. stating that slavery can be used as form of punishment. 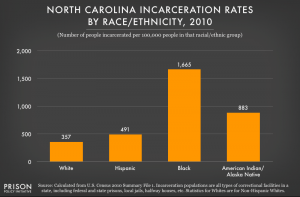 How do you think that mass incarceration is affecting to the US society, specially to afroamerican and hispanic people?

The Prison Industrial Complex is a profiteering social control apparatus that serves to keep the most revolutionary voices silenced and disappeared from the communities that they come from. Angela Davis says it best, “the penal system as a whole does not produce wealth. It devours the social wealth that could be used to subsidize housing for the homeless, to ameliorate public education for poor and racially marginalized communities, to open free drug rehabilitation programs for people who wish to kick their habits, to create a national health care system, to expand programs to combat HIV, to eradicate domestic abuse — and, in the process, to create well-paying jobs for the unemployed.” “…the prison has actually operated as an instrument of class domination, a means of prohibiting the have-nots from encroaching upon the haves.” (8)

7)  In NC people of color are over-represented in the carceral system (p.i.c.) https://static.prisonpolicy.org/images/2010rates/NC_Rates_2010.png

Post-scriptum : The following is a thank you letter and update from a hunger striker within the prison walls of Scotland Corr.

Komrade is more than a friend, it’s a title given to one who struggles with you and makes sacrifices to assure their Komrade knows they have a Komrade.

So thank you Komrades all of you who took the time to shine a strobe light on the inhumane living conditions myself and others were being subjected to. When unconscious prisoners see that there are people who care about us, their morale and desire to join the struggle reach unforeseen heights.

Love and Solidarity was what motivated you all and know we are grateful for all the time and energy that was put in to let these miscreants know that we have people that love us despite our flaws. When outside support is shown, these miscreants think twice before they move on us.

We knew there would be reprisals and I was the victim of them, but I gladly take them with pride knowing that my fellow prisoner can enjoy exercise outside his cell five days a week and be offered a phone call every 90 days.

Since the calls were made, Captain Henderson has been in the process of addressing our complaints. She let it be known that it wouldn’t be done overnight, but the recreation was rectified immediately, we’re still waiting to hear from her on the phone calls which must be provided once every 90 days. They are obviously not complying with their own policies and procedures. This negligence on behalf of the prison staff is nothing new and there’s still a mile to walk but with the support of ya’ll on the outside we don’t have to walk the mile alone.

Held captive by the state at Scotland Correctional Institution