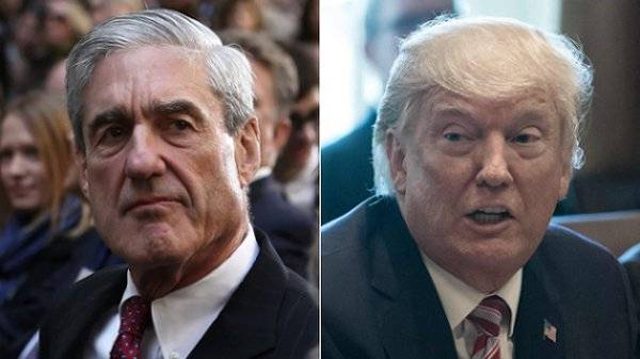 It is harmful to the masses to let a faction of the ruling class lead the battle against Trump. Mueller and his grouping will do it in an entirely unprincipled way which will do nothing to impede the attacks on the people.

While the Trump administration’s attacks upon the masses continue without letup, the political struggle within the ruling class intensifies and the political crisis of the system deepens.

On the one hand, the Republican Party and Trump are about to finalize a tax giveaway to millionaires and billionaires to the tune of hundreds of billions of dollars, even as they starve social services, health care, education and environmental protection and threaten hundreds of thousands of undocumented immigrants.

On the other hand, the special prosecutor’s office under Robert Mueller has just forced Michael Flynn, Trump’s former national security adviser, to enter a plea agreement that can implicate high Trump officials in secret dealings with the Russians during the election campaign of 2016.

It is harmful to the masses to let a faction of the ruling class lead the battle against Trump. Mueller and his grouping will do it in an entirely unprincipled way which will do nothing to impede the attacks on the people.

Many, many struggles have been waged on numerous fronts against capitalist reaction — on the picket lines, in the communities, on the campuses, outside detention centers, in the prisons and on the reservations. These struggles must grow stronger and wider until they eclipse the Mueller investigation and the FBI — enemies of the people. The popular struggle against Trump must take center stage.

The move by Mueller against Flynn is calculated to undermine Trump at the moment that he is moving to push things even more sharply to the right. In fact, the Mueller investigation is as much about Trump as it is about Russia. Mueller took Trump totally by surprise by not giving the White House even a moment’s advance warning of the deal with Flynn.

While the ruling class is salivating over the planned tax cuts for billionaires, oil companies, real estate moguls, etc., they are also applauding Trump’s attack on all forms of regulations that limit the damage the bosses can do to the workers, the environment, immigrants, education and so on.

But while they are using Trump for their own enrichment, the imperialist rulers don’t want him to tear apart the global system of alliances and networks of subversion that they have built up over decades to protect their profit interests.

The announcement of Flynn’s plea deal came shortly after White House plans to move CIA Director Mike Pompeo into Rex Tillerson’s post as secretary of state were made public. Tillerson is no dove. He was CEO of the biggest private oil company in the world, ExxonMobil. He is a reactionary, worth hundreds of millions of dollars, who spent his career dealing with the heads of oil states and planning the plunder of oil-rich countries.

Yet Tillerson is a watchdog for Wall Street who has differed with Trump on many things and has tried to uphold many of U.S. imperialism’s standard political positions in the world.

Tillerson helped keep Trump from pulling out of the Iran nuclear agreement. He opposed pulling out of the Paris environmental accord. He held out for negotiations on the Korean crisis and was publicly rebuked by Trump, who said Tillerson was “wasting his time.” Tillerson was opposed to Trump’s alignment with Saudi Arabia’s blockade of Qatar, where there is a giant U.S. airbase. He tried to patch up U.S. relations with NATO after Trump called the NATO alliance “obsolete.”

When asked about Trump’s views that there were “good people” among the torch-carrying fascists in Charlottesville, Va., Tillerson replied that Trump “speaks for himself.” And it has been reported that Tillerson had deep reservations about the Muslim travel ban. These are all standard, mainstream imperialist positions expressing the basic interests of Wall Street and the Pentagon.

But Pompeo is far more right wing. He spends hours with Trump every day, traveling from Langley, Va., to the White House to brief Trump on developments. He is an ultra-warhawk who has spoken of assassinating north Korean leader Kim Jong Un, sabre-rattled at Iran, and is a fanatical Islamophobe on the same wavelength as the neofascist Britain First organization.

Unlike Tillerson, Pompeo is regarded as a trusted consultant by Trump. Trump just retweeted three concocted and violent anti-Muslim videos to his 144 million followers that came from Britain First. Pompeo defended the tweets.

Pompeo is also an ally of Frank Gaffney, who runs the Center for Security Policy. Gaffney considers following the Koran to be “sedition,” which should be prosecuted. Pompeo has been on Gaffney’s radio program 20 times. Pompeo has publicly agreed with Gaffney that President Barack Obama was anti-Christian and pro-Islamic State group. (theatlantic.com, Dec. 3)

For the moment, Trump has pulled back on the removal of Tillerson, undoubtedly in response to the Mueller attack.

The anti-Trump sectors of the ruling class, and especially the ruling-class advisory ranks in the media and the think tanks, as well as the Democratic Party leadership, are hoping that Mueller will be able to bring down Trump or push him back over the Russian connections. That is because they do not want to confront him politically for his racism, sexism and bigotry and his warmongering, Islamophobic, anti-working class, authoritarian style of rule.

The liberals and moderates, especially the Democratic Party leadership, feel that Trump and his family and administration are vulnerable because they are so entangled with Russian officials and capitalists. These anti-Trump forces have elected to confront him on a reactionary, anti-Russia basis, rather than on the basis of his reactionary policies and politics.

For them, the anti-Russia campaign has the twin virtues of keeping Pentagon military contracts flowing as well as promoting a geostrategic position of the military encirclement of Russia. That is what the attempt to seize all of Ukraine was about. Now U.S. battalions and anti-missile batteries are being moved within miles of Russia. The excuse given for these hostile maneuvers is that they are aimed at protecting Poland and the Baltic satellites of NATO.

Trump’s Russia entanglements and the banks

Trump’s vulnerability flows from his years of dealing with Russian oligarchs. During the 1990s and after the 2007 economic crisis, Trump’s access to big imperialist banks ran dry.

As this author wrote in an article titled “Behind the firing of Comey: A struggle within the U.S. ruling class,” which appeared in the May 16 issue of Workers World:

“[T]he only big bank that has lent money to Trump in recent years is Deutsche Bank, which was recently fined $630 million for laundering $10 billion worth of Russian money. (cnn.com, Jan. 31) The big New York Wall Street banks won’t lend to him because he has gone bankrupt six times, stiffing investors, contractors and workers.” (Wash. Post, Sept. 26, 2016, and wsj.com, March 20, 2016)

John Norris and Carolyn Kenney wrote of his relation to Russian oligarchs in “Trump’s Conflicts of Interest in Russia”: “As Fortune Magazine notes, during the 1990s, Trump found himself more than $4 billion in debt to more than 70 banks, and a series of bankruptcies, heavy financial losses, and debt restructuring lead almost all major American banks to simply refuse to do business with him. … [H]e began to rely very heavily on foreign banks for his lending.” (americanprogess.org, June 14)

Many more examples could be cited, including how a former Soviet official turned capitalist opened up his world headquarters in Trump Tower. But there is not space enough in this article to elaborate.

Trump, in other words, was too crooked for the crooks on Wall Street. But the Russian oligarchs, who had become billionaires overnight by plundering the destroyed socialist economy after the counterrevolution, first under Boris Yeltsin and then under Vladimir Putin, had money to spare to be invested and laundered. The Trump family, being shut out of Wall Street financing, was inevitably drawn to them.

Of course, politics follows the money, and the Trump family became entangled with Russia, financially and perhaps politically. This is what makes Trump legally vulnerable under U.S. capitalist law. It is on this that the neoliberals, Democratic Party bigwigs and anti-Trump sectors of the ruling class are pinning their hopes.

Workers and oppressed must take advantage of split to fight back

Whatever the particulars of the case, it would be to the detriment of the working class to let the ruling class lead the battle against Trump.

If the top labor leadership were not in the pockets of the bosses, it would have mounted massive struggles against the tax bill, opened up the fight for universal health care and defended the 800,000 DACA immigrants, as well as the tens of thousands of immigrants from the Caribbean facing deportation.

It would fight for a massive raise in the minimum wage and, above all, open up the battle against racism/white supremacy, sexism and anti-LGBTQ oppression. It would demand U.S. troops out of the Middle East, Afghanistan, Africa and south Korea, and an end to U.S. military exercises against the Democratic People’s Republic of Korea, hands off Venezuela and Honduras, and an end to the blockade of Cuba.

It would wage a struggle to shut down the Dakota Access Pipeline, not only in the interest of the environment, but in solidarity with the Native people whose land is being destroyed.

This would be the beginning of a minimal independent working- class program.

This is the way to fight Trump and Trumpism, as well as the neoliberalism of the Democratic Party imperialists.