In prison for 37 years, Mumia Abu Jamal finally has the right to defend himself. When will he finally be released?

Mumia Abu Jamal just turned 65. Known as “The Voice of the Voiceless”, he has spent most of his life in prison – 37 years now – after his death sentence in 1982. “A vindictive trial” as denounced by his supporters around the world. The evolution of this court case seems to show that, despite everything, they are right. After the commutation of the death penalty to life imprisonment in 2011, a landmark decision has just been made: the Pennsylvania court finally accepted for the first time that Mumia’s defense can appeal the sentence. Interview with Jacky Hortaut, animator of the French collective “LIBERONS MUMIA”.

Alex Anfruns : Can you explain why Mumia was convicted?

Jacky Hortaut : It’s a relatively classic case in the United States. Mumia is African-American, at the time he was a quite brilliant journalist working for several radio stations in Philadelphia, Pennsylvania. He was accused of killing a police officer. I would like to qualify: a white police officer. It is rather in the other direction that this is happening in general, especially today. Just look at the number of African-American citizens who have been killed by police officers in recent years…But he was charged with the opposite: it was the black journalist who killed a white police officer; he was charged with this homicide while he himself had been seriously injured during the crime.

It happened at the end of the night, on a major arterial road in Philadelphia. At the time, Mumia could not live by his job as a journalist alone, so he worked as a part-time taxi driver for economic reasons. That day, when he left a client around three or four in the morning on a major road in the city, he recognized his brother with his arms held high, detained by a policeman. So he left his vehicle on the boulevard, crossed it and when he arrived at the scene of the police checkpoint, there was a shooting. A policeman was killed, Mumia was seriously injured. The police immediately took him to the police station. Noticing that Mumia was losing a lot of blood, and panicking at the thought that he might die on the spot, the police took him to the hospital. Under the protection of the medical profession, it took him several months to recover and be tried on the charge of murder… The trial was instituted… He was never able to defend his innocence, nor offer any argument, because from the first hearing in which he participated, he was immediately arrested and imprisoned….

From the subsequent hearings, it was discovered that the trial was vindictive from beginning to end, with no possibility for him to present witnesses. In addition, his public defender had only a few days to address the case. Knowing that there is no investigating magistrate in the United States, it is incumbent upon the defense to challenge the prosecution’s position and thus conduct the investigations. You can imagine that in a few days or weeks, in a death penalty case, Mumia was not defended under normal conditions, if we refer to international standards. The trial was racist and expeditious.

Did any human rights organization investigate your case?

Yes, after this trial and Mumia’s death sentence in 1982, organizations like Amnesty International, the UN Commission on Human Rights and even the European Parliament produced reports that made a lot of noise. In particular, Amnesty USA said that there were dozens of legal reasons to consider that Mumia had been convicted under unacceptable conditions. In any case, he has never had a chance to defend himself. Mumia was then 28 when he was sentenced to death. 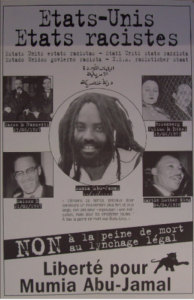 Today he’s 65 years old and still in prison, but during that time his case has gone through a lot of ups and downs. How did Mumia escape from death row?

He remained on death row for 30 years. When one is sentenced to death in the United States, the appeal procedures are very lengthy. First it was tried in the state that tried him under its own laws, then in the federal courts under the laws that apply throughout the United States. Until the early 1990s, Mumia used all of his resources. Every time they were rejected, even the Supreme Court of the United States, the highest American court. Later, Mumia faced two death warrants. The first, in 1995, resulted in increased mobilization in the United States and increased awareness throughout the country. This mobilization allowed the order to be lifted and Mumia was not executed.

But four years later, in 1999, there was another attempt. Mumia was even better known on the planet, and there was a huge international mobilization that led the state governor to overturn his decision, only a few hours before the scheduled execution, and since 2000, Mumia has had several defense teams, but above all he has benefited from a mobilization that has only grown around the world. From that moment on, the correlation of forces dealt more with the question of the conditions under which Mumia had been sentenced, with the aim of obtaining a review of his trial; and at the same time, his defenders were able to help him financially and legally to multiply the evidence of his innocence.

This work during the first decade of 2000 led the U.S. Supreme Court in 2011 to finally consider the conditions under which his death sentence had been passed as questionable. However, even though he was found guilty, the Court refused to review his trial. But that allowed his sentence to be commuted to life imprisonment, and he was released from death row in 2011, after spending 30 years there. This first victory was a stimulus to continue the fight. To say life imprisonment is like saying second death sentence – a slow death sentence in Mumia’s words – without the possibility of parole. This is the judicial situation Mumia finds himself in today.

In December 2018, the Pennsylvania court accepted for the first time that Mumia’s defense could appeal. What did this development allow in the trial?

This is the best news we’ve had since 2011, the most important judicial event in his trial. This decision was made by a court that had been asked to consider a new appeal of Mumia’s defense, based on the new jurisprudence of the U.S. Supreme Court, which now prohibits the same magistrate from getting involved multiple times in the same person’s case. This jurisprudence applies in particular to trials where the result could be the death penalty.

Mumia’s case was the case of a convicted person who had received a new trial. In Mumia’s case, the judge in question was Ronald Castille, who had been a prosecutor in Philadelphia and then a judge of the Pennsylvania Supreme Court before becoming its first president. And each time Mumia’s case was reopened by his defense in the presence of that magistrate, the appeals were systematically dismissed. That is no longer possible under U.S. law today, thanks to this new jurisprudence of the Supreme Court. So, after more than a year of numerous hearings, the judge – the only magistrate who has accepted Mumia’s ability to testify by telephone since his death sentence – acceded to Mumia’s request for a new appeal?

But in the last days of 2018 Mumia’s defenders received a cold shower… What happened?

Yes, that low blow was given by the new Philadelphia prosecutor. However, he was someone who enjoyed good press among the African American community, but also, more generally, in human rights organizations. He was brilliantly elected as a prosecutor in 2017 after an exemplary career as a lawyer, where he defended all cases of human rights violations. He has received great sympathy from the poorest, from the victims of racism and discrimination. This explains the disappointment and anger of Mumia’s defenders when, a month after the judge’s decision to grant him the right to a new appeal, he challenged it by simply asking for its annulment. 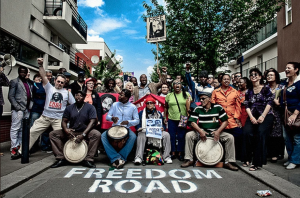 Well, his intention had the opposite effect!

Indeed, there was a strong mobilization during February and March for that prosecutor to withdraw his challenge and for Mumia to benefit from the fullness of the judge’s decision. Finally, the mobilization won the game! The French collective contributed to this success. At the beginning of April, the prosecutor withdrew his challenge, which means that the judge’s decision can be implemented. His defense appealed immediately. Thus, the court case has been restarted, whereas in recent years we hardly believed in it anymore. It is a considerable event.

37 years in prison must have been a difficult experience from every point of view. What can you also tell us about Mumia’s state of health?

In recent years, Mumia has faced very difficult conditions, even after leaving death row. Although in a medium security prison he has contacts with other prisoners, this was not possible during the 30 years he spent on death row because he was totally isolated.

Four years ago, Mumia was very sick because he had hepatitis C. He almost died. This time, too, he had to fight an absolutely incredible legal battle, with a strong international mobilization, in order to get better care. As a result of that mobilization, the Pennsylvania Correctional Service was ordered to provide treatment. Once the disease virus has been eradicated, Mumia is better off, but the after-effects have not disappeared, such as liver cirrhosis and, more recently, the appearance of glaucoma.

For those who know a little about Mumia’s work, we know that he is a committed journalist: he regularly expresses himself about current events in the world, through his letters and writings sent from prison… How would you describe Mumia’s morale over the years?

Absolutely, Mumia is a scholar: he has many qualities, this great Mumia. He is not only tall in size, but also in ideas. He wrote about ten books during his captivity. He works regularly as a freelance on “Prison Radio”. It is a very popular radio station that gives prisoners the opportunity to communicate with their families.

Mumia talks about global issues, U.S. politics, human rights, justice, the death penalty, mass imprisonment? As he says, he does his job as a journalist from prison!

Sign the petition For Mumia Abu-Jamal, there is only one justice: your liberation!