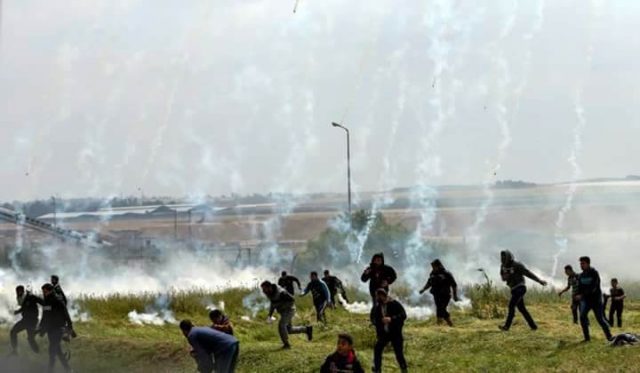 Shahd Abusalama writes about Friday’s massacre in Gaza during the Great March of Return.

My 15-year old cousin Muhammad Abu Loz just got injured by gunfire from Israeli occupation forces at the Great March of Return, east of Jabaliya refugee camp in the Gaza Strip.

He was among thousands of Palestinians from all generations who have joined these marches in commemoration of Land Day, protesting against the longstanding Israeli colonial occupation and the denial of our inalienable political rights.

Israel met them with 100 military snipers.

My cousin survived, but my grandfather’s neighbor, Muhammad Kamal al-Najjar, 25, was shot dead. He is one of at least 12 people who had been killed by Friday evening.

Since 30 March 1976, when Palestinian citizens of Israel led a popular uprising against Israel’s confiscation of huge swaths of their land in the Galilee, the anniversary has been marked as Land Day.

On that day in 1976, Israel also met civilian protesters with lethal gunfire, killing six and injuring and arresting many more.

Four decades later, Land Day remains one of the most significant dates in the Palestinian political calendar – a day commemorated by popular resistance to ongoing Israeli colonial oppression, land theft and systematic policies of erasure.

In Gaza, Land Day demonstrations are held near the Israeli-imposed buffer zone, a strip of land inside the Gaza boundary that eats up 30 percent of the small territory’s farmland.

This buffer zone only tightens the Israeli chokehold over Gaza’s two million residents who are besieged by the Israeli military from land, sea and air.

From the north and east, Gaza is surrounded by Israeli artillery, tanks, snipers and military checkpoints. From the sea it is blockaded by Israeli warships that constantly fire on Gaza’s fishers, and from the south, the Egyptian military collaborates with Israel to maintain the closure of the Rafah crossing, the only lifeline to the outside world for most people in Gaza.

Sick with worry as I followed the day’s events from a distance, I called my mom in Gaza. I knew she had been looking forward to this evening’s celebration of her nephew Abed’s wedding, with drums banging as people joyfully sing and dance dabke.

My mom sounded overwhelmed over the phone. When I asked if the wedding was still on, she said yes.

“But given our neighbor’s devastating loss and your cousin’s injury, the zaffa [the celebratory procession] is canceled and the wedding songs will be substituted with revolution songs celebrating freedom fighters,” she said.

My parents, like other Palestinians, anticipated Israel’s violence today, but for them Israeli violence is constant, so carrying on with the wedding is not as strange as it might sound. It’s a way to show that life goes on.

They also went to the place of protest in eastern Jabaliya yesterday to help set up the “return tents” which will remain rooted there until 15 May – Nakba Day – to call for our long-denied right of return to the lands from which we were expelled by Israel in 1948.

That right that remains at the core of our anti-colonial struggle.

This morning, they went to my grandfather’s house, where the wedding lunch was set to take place, not knowing that it would turn into a funeral.

Our short conversation left me feeling further detached from my current place of residence in the UK, where the majority of people are celebrating Good Friday with their families in safety and happiness.

But in Palestine, Good Friday was stained with bloodshed and brutal violence, thanks to Israel.

There is no justification for Israel to open fire against protesters posing no threat whatsoever.

Israeli and Palestinian human rights groups warned that this is a crime.

There is no justification for suppressing people whose right to resist colonial oppression is guaranteed by international law. The fact that Israel has been able to continue this brutal violence against Palestinians with total impunity for 70 years reflects a deep-seated moral problem in our world.

Shahd Abusalama is a Palestinian artist from Gaza and the author of Palestine from My Eyes blog. She is a PhD student at Sheffield Hallam University, exploring Palestinian cinema. She can be followed at@shahdabusalama.