Hundreds died “as a result of the indonesian elections” 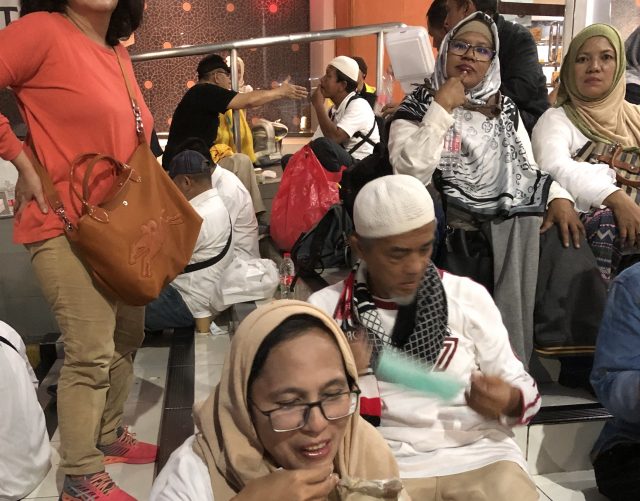 Most likely, Prabowo was defeated, for good. “Goodbye, General!” But the fact that a genocidal cadre like him managed to get 45% of votes is by itself extremely alarming. Now, in what direction is Indonesia going to go, under the “second Jokowi term”?

It truly looked grand, impressive – the fourth most populous country on earth voted in general elections, which were held on 17 April 2019. Hundreds of positions were for grab: that of the president, the vice president, members of the People’s Consultative Assembly (MPR), and members of local legislative bodies. There were 190 million eligible voters in the country, and sixteen parties, including four new ones.

The only “tiny” spoiler of this magnificence was that, as always in post-1965 Indonesia, not one single political party was really representing the people. All of them were pro-business, all controlled by the oligarchy. Almost all the candidates were ‘competing’ with each other, trying to prove to the increasingly fundamentalist Muslim majority of the country, how Islamic they really were.

In Indonesia, Communism is banned. Atheism is forbidden as well. Belief in market fundamentalism and religious zeal are the two ‘norms’, expected from any individual who is aiming at any important political office.

On 17 April 2019, people voted. Or more precisely, they came to put pieces of paper into boxes, as they were told by their Western handlers.

In the end, it was down to two main choices: an incumbent President “Jokowi” (Joko Widodo by his real name), and the retired General Prabowo.

Jokowi, originally a humble furniture-maker and later a mayor of the city of Solo in Central Java, could be defined as ‘progressive’, but only in the Indonesian or Southeast Asian political context. He looks so attractive because his challengers have  mainly been mass murderers and outright kleptocrats.

However, during the first term in the highest office, Jokowi did almost nothing to stop the genocide and plunder in West Papua, or the alarming surge in the influence of Wahhabism (Saudi-style Islam, supported by the West), which is blocking Indonesia from any intellectual (scientific, artistic, philosophical) achievements.

Whenever accused of being a ‘Communist’, Jokowi bent, going out of his way to prove that he has nothing to do with the real Left. When attacked for ‘not being Muslim enough’, he immediately began ‘leading public prayers’, bringing Muslim politicians into his team, and acting religiously. He failed to defend his former allies who were destroyed by the Islamists, including highly-popular former governor of Jakarta – Ahok – who recently spent time in prison for ‘defaming Islam’. Periodically, often at the request of the United States, Jokowi antagonized China. That’s when his critics from the extreme right were attacking him for getting ‘too chummy’ with Beijing. Indonesia is racist, and many Chinese (as well as members of other ‘non-mainstream groups’) here died during the countless pogroms committed throughout past centuries.

“Don’t pay attention, all this is just a political maneuvering,” it was said by his supporters. But if that was so, it was a terribly ugly maneuvering, to be frank! Just an example: One lady teacher, who exposed her sexual harasser and as a result was thrown into jail, got zero protection from President Jokowi. The increasing Islamisation of Indonesian society, often unconstitutional, goes unchallenged. Compared to the era of the progressive Muslim cleric and past President, Abdurrahman Wahid, Indonesia is regressing, increasingly resembling the oppressive Gulf States.

The correct argument of many (at least relatively secular) Indonesian citizens, is that, were the other main candidate – the retired General Prabowo – to win these elections, the country would basically collapse; go back to Suharto-style fascist, military dictatorship. Prabowo is actually married to one of Suharto’s daughters. And he has a record, almost a ‘career’ of being a mass murder: from East Timor to Java itself. He surrounded himself by the most conservative Muslim cadres, as well as by the anti-leftists and the oligarchs.

Once before, during the previous elections, Prabowo lost to Jokowi. Most likely, this – 2019 elections – was his last chance.

Joko Widodo and his PDI-P won, with 55.5% votes, while Prabowo Subianto ended up with the support of only 44.5%.

On 21 May 2019, the General Elections Commission declared “Jokowi” and his running-mate Amin as the winners. Prabowo and his team disputed the election results, and protested against Jokowi’s victory. One day after the results were announced, deadly riots erupted. Around the time election results were released, Reuters reported:

“Indonesian police arrested a man on Friday accused of creating an anti-Chinese disinformation campaign to incite racial hatred, amid a proliferation of rumours alleging Chinese involvement in post-election unrest that has raised fears of ethnic violence.

Police say the suspect created a viral hoax using a photo of three Indonesian police officers at protests this week with a caption describing them as secret Chinese soldiers based on their “slanted eyes”.

Of course, we all knew that it was coming. One week before the disturbances, I was still in the Indonesian capital, filming a group of insane-looking women, gathering in front of the Sarinah shopping center. Their hair covered, maniacal expressions on their faces, they were shouting into my camera:

“We love Prabowo! He is good; he is so smart, he is our President!”

Almost the entire extreme Islamist apparatus stood by the former genocidal General. Many housewives obsessed with military uniforms, were ready to support him, unconditionally, until the bitter end.

Life in Indonesia is empty and monotonous. The 1965 US-orchestrated coup destroyed much of the culture and spirituality. Intellectualism had been wiped out, and so were the arts. Political diversity eliminated. Only cheap pop is now available. Pop, as well as the most fundamentalist forms of religion.

No wonder that in such a ‘climate’, elections as well as the World Cup (to which Indonesia never qualifies, but which it follows with maniacal loyalty), manage to fully mesmerize the society.

And in a nation which since 1965 has perpetrated 3 genocides and various deadly unrests, an excessive obsession with anything, is never constructive, in fact is often devastating.

To some of Prabowo’s ‘obsessive supporters’, he impersonates power, machismo, righteousness and “Muslim values”. The people he killed or gave orders to kill? Who cares – they were all some ‘separatists’, commies, atheists. That’s how the majority sees them.

On 22 May, 2019, the pro-Prabowo camp rioted in Jakarta and other Indonesian cities. 6 people were murdered and 200 injured. That has been a very ‘conservative’ estimate, although both sides were accused of manipulating numbers (Jokowi’s camp downwards, Prabowo’s upwards).

Muslim jihadi cadres were apparently involved, too, accused of stabbing and intimidating.

Armed forces crushed the riots. It had to be done, as the rioters were mainly paid thugs and Islamic fundamentalists.

Earlier, some 600 died, during “the lengthy voting and counting process”. The official numbers were 569, while the unofficial spoke of 700, even 800. Yes, the counting process was very taxing, but perhaps no other elections in the world (in peacetime) registered such a high mortality rate among officials and volunteers. But then again, Indonesia is a very poor country, and many of its citizens are suffering from various undiagnosed diseases. Long hours and difficult conditions during the elections put great pressure on the volunteers. Still, such a mortality rate is unprecedented.

Prabowo’s team immediately claimed “the deaths were linked to fraud that disadvantaged him.” Most likely, it is not the case. However, Jakarta and the provinces remain tense.

Most likely, Prabowo was defeated, for good. “Goodbye, General!” But the fact that a genocidal cadre like him managed to get 45% of votes is by itself extremely alarming.

Now, in what direction is Indonesia going to go, under the “second Jokowi term”?

Even after monstrous slaughter of men and women belonging to left-wing organizations during Suharto era, Communism and socialism are increasingly vilified once again. Religions are force-fed to the de-intellectualized and badly informed population. The treatment of women in Indonesian society is despicable. Capitalism is glorified, in fact it is never even publicly challenged.

Jokowi has been flying all over the world, begging for more foreign investment, while his cabinet was promising to ‘liberalize’ labor laws even further.

The environment of Indonesia is thoroughly plundered, as its economic growth (sluggish, considering unbridled population increase, but still at 5%) is fully dependent on the export of commodities.

There are no doubts that Indonesia will continue decaying and cannibalizing itself under the extreme capitalism regime, while intellectually regressing under Wahhabi Islam.

Jokowi may improve ports, airports, and build few new highways, mainly in order to facilitate the extraction of raw materials by local and foreign companies. But unless he fully reverses the course on which Indonesia was forced to embark after the 1965 Western-orchestrated coup, no essential improvements can be expected. There are no indications that he has the capacity or stamina to challenge and change the regime. After all, he is himself a product of the post-1965 era.

For now, extremism and fundamentalism have been defeated, although by an alarmingly narrow margin. However, it was not a revolution, but destructive inertia that won once again.

Andre Vltchek is a philosopher, novelist, filmmaker and investigative journalist. He has covered wars and conflicts in dozens of countries. Four of his latest books are China and Ecological Civilization with John B. Cobb, Jr., Revolutionary Optimism, Western Nihilism, a revolutionary novel “Aurora” and a bestselling work of political non-fiction: “Exposing Lies Of The Empire”. View his other books here. Watch Rwanda Gambit, his groundbreaking documentary about Rwanda and DRCongo and his film/dialogue with Noam Chomsky “On Western Terrorism”. Vltchek presently resides in East Asia and the Middle East, and continues to work around the world. He can be reached through his website and his Twitter. His Patreon