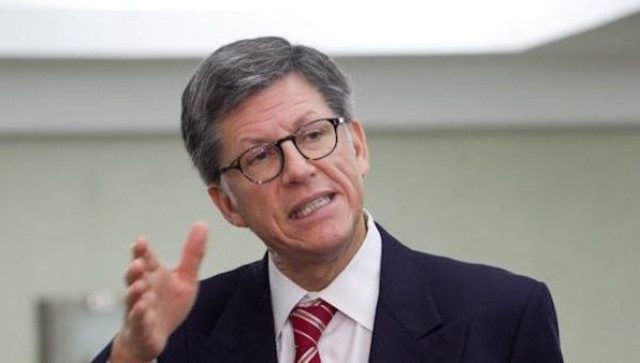 For anyone who still believes Human Rights Watch is an actual human rights group, its Americas director Jose Miguel Vivanco is trying really hard to prove you wrong.

His latest piece for O’Globo (English here) calls on Brazil’s right-wing government to speak out “about the human rights situation in Venezuela”.

“From a purely pragmatic point of view, it’s in Brazil’s best interest to join forces with the vast majority of democratic governments in the region, which are pushing to restore basic rights and the rule of law in Venezuela,” he argued.

The idea that Brazil’s deeply unpopular, brutal and corrupt right-wing government has anything useful to say on Venezuela should raise a few eyebrows – especially for anyone with even a passing interest in human rights.

Putting aside the fact that Brazil is already leading international efforts to isolate and punish Venezuela, it’s hard to call Vivanco’s plea anything less than a glaring, almost comical example of pure, unabashed hypocrisy.

Vivanco has long rallied against what he says is Venezuela’s rampant corruption, authoritarianism and supposed mistreatment of opposition protesters. On the other hand, he’s strangely silent about allegations of massive corruption in Brazil’s right-wing government, not to mention growing complaints of authoritarianism and mistreatment of protesters.

It’s also worth remembering that despite Venezuelan President Nicolas Maduro’s unpopularity, he was democratically elected. On the other hand, Temer seized power after Brazil’s senate managed to oust his left-wing predecessor Dilma Rousseff. Whether or not you believe this act constituted a coup is irrelevant; either way, it’s indisputable that Temer was not elected democratically. It’s also inarguable that while Maduro’s approval rating sits at a miserable 21 percent, Temer manages go even lower at a jaw dropping 10 percent. To be fair, human rights advocacy isn’t a popularity contest, but if Vivanco thinks Temer is a shining beacon of democracy, he might find himself in disagreement with about 90 percent of Brazilians.

As most Venezuelan and Brazilian voters would probably agree, both Maduro and Temer deserve some hearty servings of serious criticism. Yet even a cursory glance at Vivanco’s recent resume of work on his website illustrates the discrepancy between his views on Venezuela and Brazil.

Since the start of 2016, Vivanco had penned at least 15 articles condemning human rights abuses in Venezuela. During that same period, he hasn’t listed a single article on his HRW profile tackling Brazilian President Michel Temer’s deeply controversial government. Of course, that’s not to say he hasn’t written anything. In August 2016, he came out to defend Temer’s government against allegations of coming to power in a coup. Moreover, it would be wrong to say he has never criticised the Brazilian government – he has. From his HRW profile page, it looks like the last time he dedicated a full article to this was back in 2015, when he took a jab Rousseff. So, he was very comfortable slamming a leftist Brazilian president, but looked notably more restrained when it came to calling out the failures of her right-wing successor. Of course, looks can be deceiving, and he has made a few tepid comments here and there. For example, he poked his head in the door of this recent HRW report on Brazil’s abortion laws. I wouldn’t be surprised if there were a few more similar comments to be dug up in his defence elsewhere, but either way the reality is very clear.

Even taking the occasional remark into account, the discrepancy between Vivanco’s interest in Venezuela and Brazil is hard to ignore. Ever since Temer’s right-wing government took power, it seems that Vivanco just hasn’t been able to find much time for Brazil’s victims of human rights abuses.

However, the omission isn’t for lack of content matter. If Vivanco needs inspiration, perhaps he could try reading a few of HRW’s own reports, which warn of a rising tide of police brutality in Brazil, including extra-judicial killings. Perhaps at some point, he could take a moment to look at what is often called the world’s most brutal police force, that of Rio de Janeiro.

Yet none of this seems to really interest Vivanco too much, who for years has focused on Venezuela; heck, from looking at his resume, you’d think he is HRW’s director for criticising the FARC, Venezuela and Ecuador. He also used to enjoy writing about Argentina (back when it had a left-wing government), but he seemed to have lost interest a few months after the business-friendly President Mauricio Macri took power. He wrote one critical piece in early 2016, but has since opted to focus on the more positive side of Argentine politics. I can only assume Argentina’s massive labour strikes against Macri just aren’t that interesting. At least, they clearly aren’t as interesting to Vivanco as Venezuela is, which now seems to be his main country of focus.

His reasoning is simple: “What would be irresponsible would be to stay silent in the face of the Maduro administration’s repression of dissent, suppression of elections, and Venezuela’s humanitarian crisis.”

It’s certainly true that Venezuela is facing a massive political and economic crisis, and it would be irresponsible for anyone to ignore this. However, the same should apply to Brazil, and every other country under Vivanco’s jurisdiction.

On top of all this, Vivanco’s recent treatment of Venezuela comes after years of HRW making some pretty dubious claims about the situation in Caracas. Then there’s the infamous revolving door between HRW and the Washington establishment. For an example of this, remember that former NATO secretary general Javier Solana is somehow still on HRW’s board of directors. Solana headed NATO during the 1999 intervention in Yugoslavia. That intervention was dogged by allegations of human rights abuses, including from (you guessed it) HRW itself.

It should come as no surprise then that HRW has often been accused of prioritising political interests over careful, rigorous documentation of human rights abuses.

Nonetheless, Vivanco has long dismissed allegations of political bias against the left and in favour of the right. I’d like to give him the benefit of the doubt, but that’s hard to do when he seems to be on a personal crusade against Venezuela, while largely failing to note the dire crisis unfolding in Brazil. As he would say, that just seems a bit irresponsible.