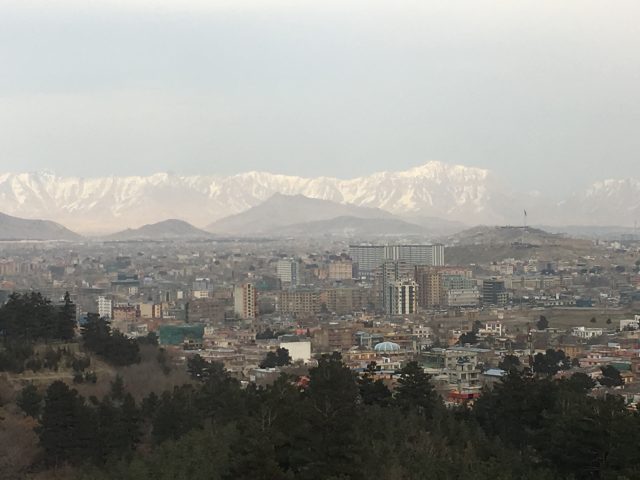 Afghanistan is now facing mortal danger. It has to survive, but it is not clear how it can manage.

Hotel Intercontinental in Kabul, which was attacked by gunmen last Saturday, used to fit like a glove, like a grandmother’s couch. Outside, the war has been raging. Millions of Afghan lives were aimlessly broken, hundreds of thousands lost. The price of more than 16 years of NATO occupation has exceeded $1 trillion, but instead of bringing peace and prosperity, it has reduced Afghanistan to rubble.

All that is still functioning in the country are structures and infrastructure built before and during the Soviet era, like irrigation ducts, canals and bread factories. Other tangible assistance came recently from China and India, but almost nothing was provided by the NATO occupation countries, except countless fences, wires and military installations.

Even before the siege at the Intercontinental Hotel, which left more than 20 people dead, Afghanistan’s President Ashraf Ghani confessed to ‘60 Minutes’ correspondent Lara Logan that he is unable to protect his own capital.

But it is not only the capital, of course. The entire country is spiraling into chaos. It is clear that it will soon be impossible to control it anymore, at least as one entity, from Kabul.

It can be heard more and more often on the streets of Kabul, Jalalabad and Herat that reducing this country to perpetual conflict and chaos may be the exact plan of the occupation forces. 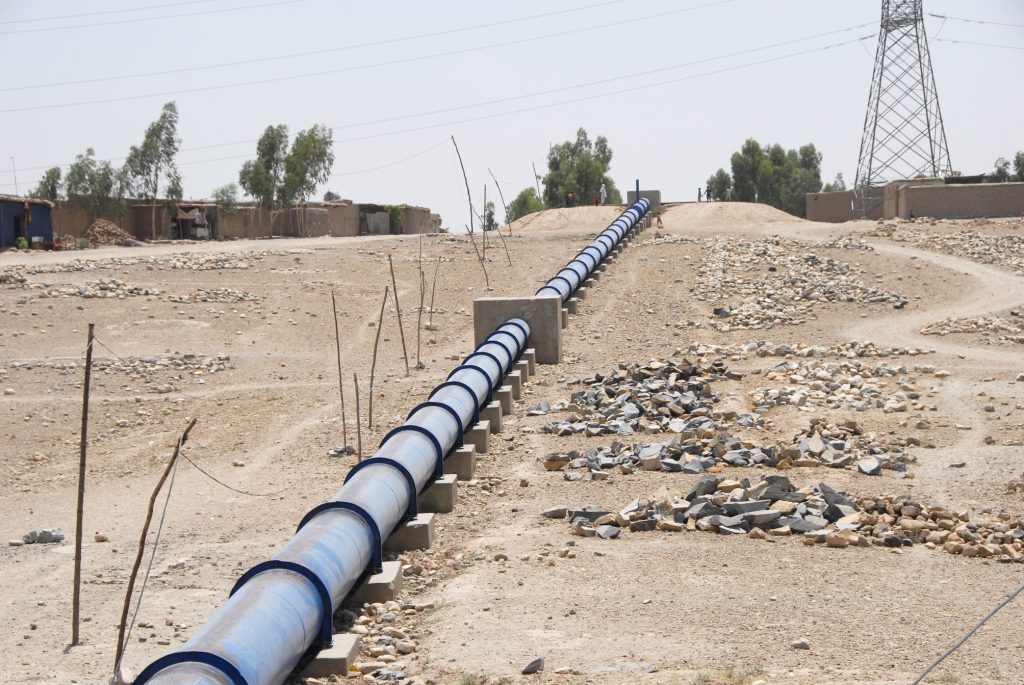 I used to joke about Hotel Intercontinental – ‘This place feels like a Soviet three-star hotel in some provincial Siberian town. Bent shower bars, stained but otherwise clean carpets, indifferent but somehow friendly staff – you could wave as much as you wanted, but the waitress in the hotel’s cafe would only move after you’d come to her personally, smiled broadly, and pointed your finger at some particular item from the limited assortment of sweets.’

Despite everything, Hotel Intercontinental Kabul was always there, standing. It was crumbling, but still somehow majestic, full of history and old-fashioned charm. Its lobby was decorated with traditional Afghan landscapes and portraits. The vistas from the hotel rooms and balconies were breathtaking: the old Bagh-e Bala Palace with its vast public park, then the entire capital city down below as though sitting in a crater, and the great mountain range rising towards the sky right behind that urban sprawl.

During breakfast hours, a few tables near the window in the hotel restaurant were almost always occupied by Russian-speaking pilots and crew members from an Afghan passenger airline, Kam Air. I don’t know whether these people were Russian or Ukrainian, but they spoke Russian among themselves, and also to me. They were tall and muscular, as pilots operating in a war zone are expected to be.

We always exchanged greetings, as well as one or two jokes. No deep discussions, just that – a few jokes and a few very warm smiles.

Some time ago, I had to fly to the ancient city of Herat, and was traveling early in the morning with Kam Air on the same flight as the crew. My driver was late and I approached the airline minivan, which was just about to depart for the airport.

“Would you please take me with you to the airport, boys?” I asked.

“Yes, of course, of course – just jump in!” they grinned. 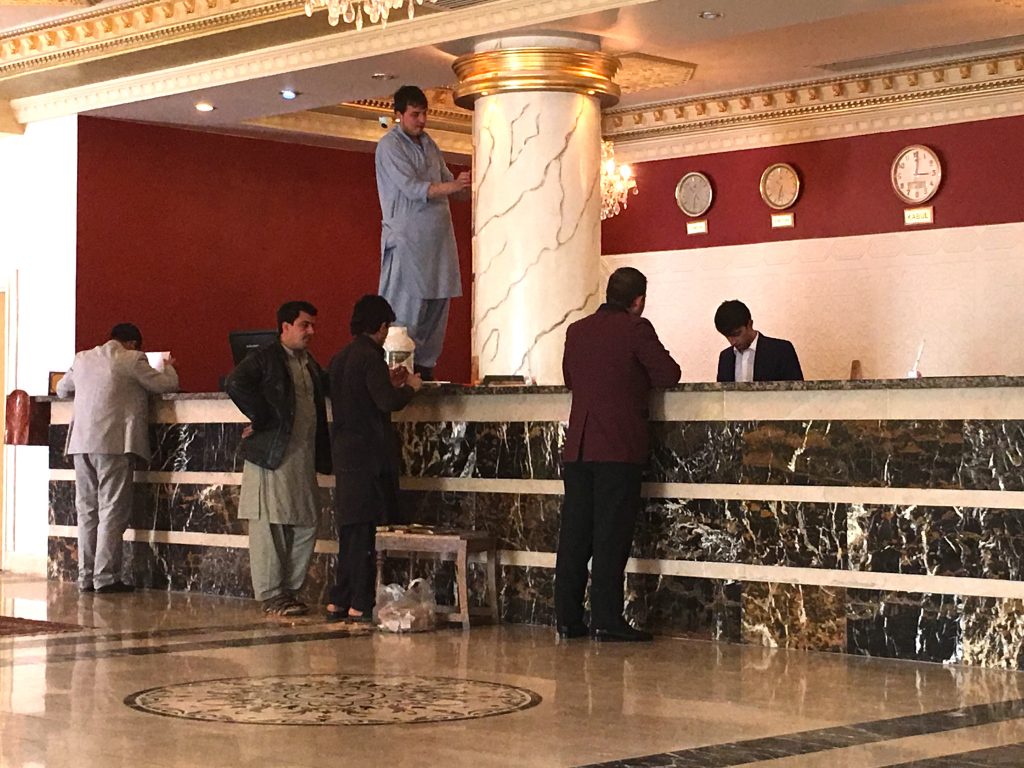 We were all part of a big family. Foreigners staying at Intercontinental – not rich and not poor, not part of any ‘government initiative’ or wealthy NGO. This hotel was for ‘working people’ – journalists, filmmakers, pilots. Those who required ‘special protection’ were staying behind the enormous concrete walls of their embassies, or in the only truly luxury hotel in the country – Serena.

Two hours later, we were flying over tremendous Afghan mountains and tiny ancient villages made of mud, miles below the wing. I was taking photographs, while imagining that insane US “mother of all bombs” that was dropped just a few days earlier on an identical hamlet, killing who knows how many innocent people.

The two powerful engines of an old but reliable MD-82 were purring reassuringly at the rear of the plane. Then, at some point, I closed my eyes and fell asleep. The next thing I experienced was a gentle pat on my shoulder, followed by friendly whisper: “Kofeiku ne khotite? Rebyata tut tol’ko cto svezii svarili” (“Would you like some coffee? The guys here just brewed a fresh one…”)

I drank the aromatic brew, looking down at those stunning, enormous mountains covered by snow. Russian-speaking pilots were in the cockpit, steering the plane with great experience and confidence.

I thought: “If there is one crew in the world that is qualified to fly over this beautiful but complex and dangerous terrain, then it is this one.”

It was one of those moments when I felt totally happy and alive, drunk with passion for what I had been doing: working in Afghanistan, exposing crimes committed there by the Western countries, falling head over heels in love with this ancient and proud nation, flying over its peaks into one of the most interesting cities of Central Asia – Herat.

On January 20, 2018, in the intensive care unit of Tokyo’s St. Luke’s Hospital, I was fighting for my life, months after my year-old foot wound reopened in Afghanistan, and had since refused to heal.

Through the fog of fever and IV, I observed coverage from Kabul on a television screen that was hanging above my bed. ‘My’ Intercontinental Hotel had been attacked. In fact, it was overrun by what was allegedly one of the most vicious branches of the Taliban, known as the Haqqani Network. At least that is what was tweeted by Javid Faisal, a spokesman for the Afghan government’s chief executive.

At least 21 people lost their lives during the 14-hour standoff. Almost immediately, several pilots and crew members from Kam Air were murdered in cold blood. So were two Venezuelan pilots. None of these people were ‘supporters of the government,’ nor were they collaborators with the invading NATO force.

They were simply a group of romantics, a group of rugged, brave but also very kind and gentle men who adored flying and who, like myself, fell in love with Afghanistan. I know this because they told me, and because it was just so obvious! 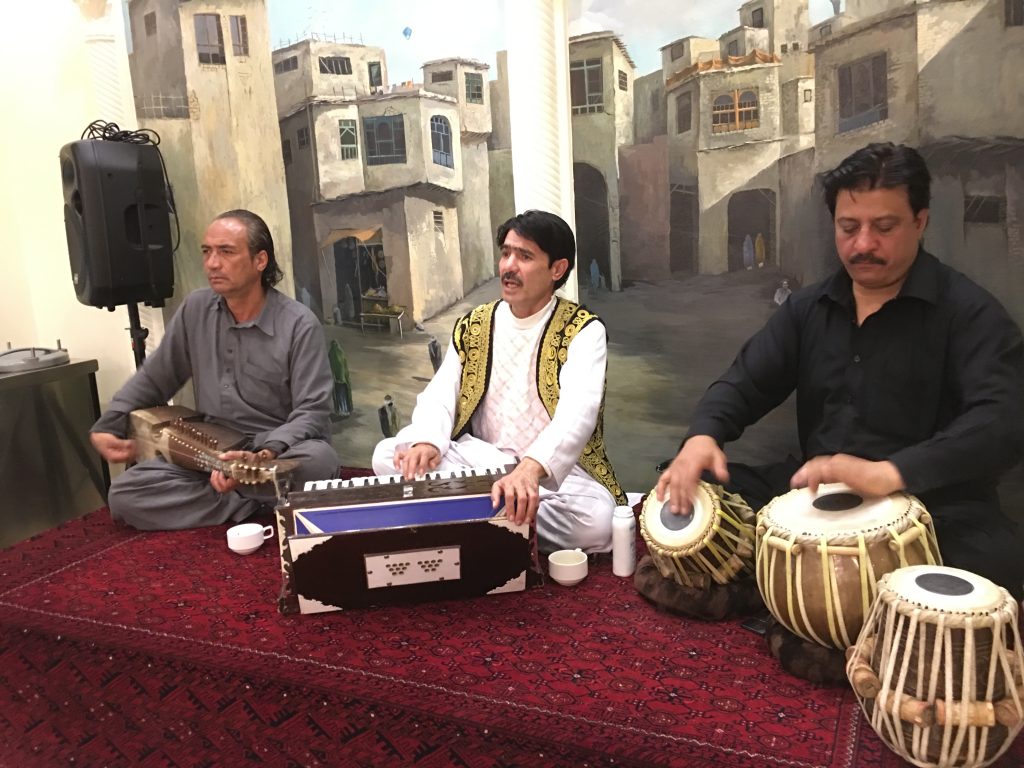 Classical musicians at the hotel (photo by Andre Vltchek)

In case anyone is wondering, ‘my hotel in Kabul’ has nothing to do with the luxury US chain of the same name. It used to be part of the ‘real’ Intercontinental, but only from 1969, when its doors first opened, until 1980 (shortly after the Soviet Union intervention in Afghanistan). Now, it is a state-owned property, described as ‘luxury’ only by outsiders who are covering Afghanistan from afar. You can get a room there for a mere $50 if you negotiate very hard, and for $60 if your bargaining skills are somewhat limited.

The hotel had already been damaged on several occasions, particularly during the civil war of the 1990s, when it is said that at one point only 85 out its 200 rooms were inhabitable. As recently as 2011, 21 people died here during an attack for which the Taliban claimed responsibility.

Despite its macabre history, however, Intercontinental is still the favorite property of many locals and some foreigners in Kabul. This is where many conferences are held, and – during the fasting month of Ramadan – fast is broken here by members of local elites, close to the swimming pool overlooking the city. And there is music here almost every night: true Afghan traditional music, with local instruments and singers trained by renowned masters. 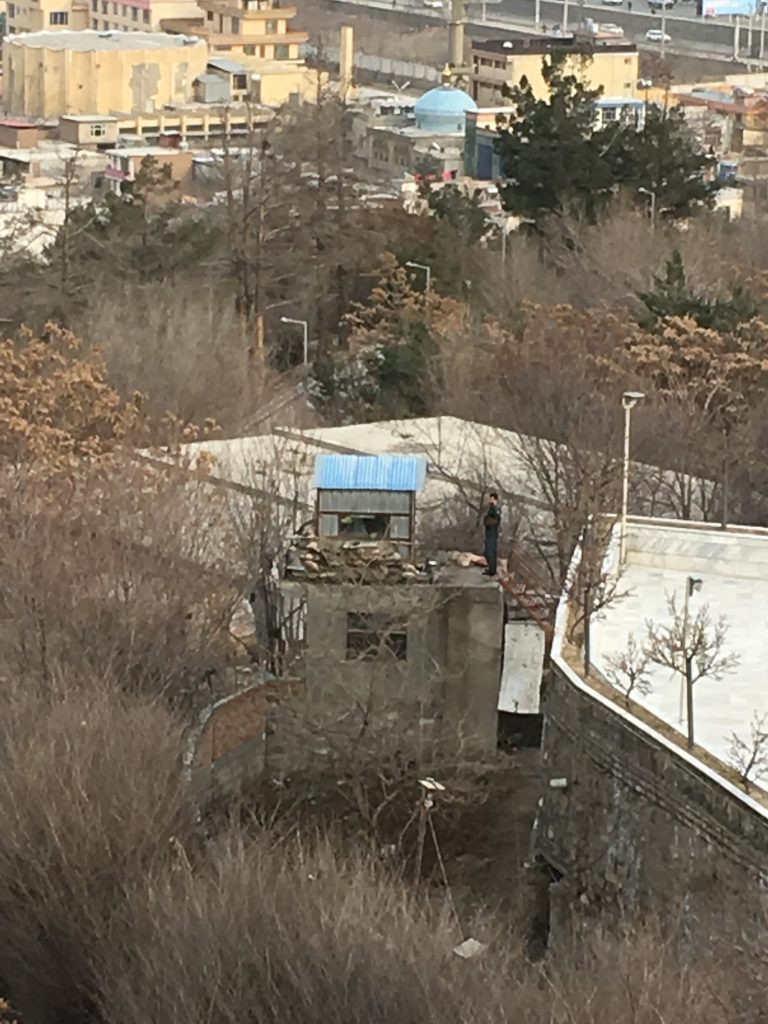 Guard posts around the hotel (photo by Andre Vltchek)

Security is, of course, everywhere. To return to this property from the city, I always have to go through three full security posts with my car. After all, Afghanistan is now considered one to be one of the most dangerous countries on Earth for foreigners.

In just one week, three deadly attacks shook Afghanistan: one in Kabul, another outside Herat, and a third inside the city of Jalalabad, in which ISIS targeted the NGO Save the Children.

Last year, I traveled to many corners of this scarred, ancient land. I spoke to people, including those in the villages that were at least partially taken over by Taliban. People are increasingly realizing that they are living in perpetual conflict. Refugees (or internally displaced persons) from the east are talking about the carnage that comes with the arrival of ISIS.

Hard drugs and poppy seeds are everywhere in the center of Kabul, right under the nose of the US occupiers – poppy fields literally surround Bagram Airforce Base.

Soviets and Russians are now remembered with love and great nostalgia; something that I already described in my previous essays from the country.

Very soon, no foreigners will be left in Afghanistan. That may be the main goal of the latest attacks. No witnesses, no alternatives, no solutions.

Who will benefit? Definitely not the devastated Afghan people. Perhaps the warlords, the extremist mullahs, and the occupiers.

Kam Air crew, flying passenger jets all over the country, and the dilapidated Intercontinental were some of the last symbols of normality – a weak promise that one can still come and see what is really happening in this country.

From now on, there will be hardly any foreigners in the country. It will be only us – war correspondents, as well as foreign soldiers and mercenaries.

Afghanistan is now facing mortal danger. It has to survive, but it is not clear how it could manage. Those who love it should return, no matter what risk we’d be facing. A news blockade should be prevented. Alternative (non-Western) information has to flow. By all means, at any price.