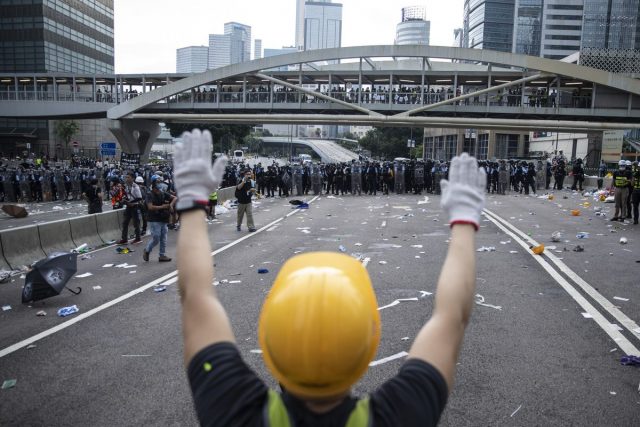 For several months, Western mass media called the Hong Kong rioters, “pro-democracy protesters”. It still does. But I began noticing a new, even deadlier terminology. Now, the black-clad ninja-looking men and women that are periodically and violently clashing with the law enforcement forces are once in a while described as “pro-independence”.

Some Hong Kong citizens are defining the rioters, who recently celebrated the Americans’ “Mother’s Day” with further protests and aggressive actions, as a “political virus”.

Now many people living in Hong Kong are calling for the use of force against the predominantly young, badly-informed and poorly educated individuals – those who have been responsible, together with the novel coronavirus, for bringing their city to its knees.

It has become obvious that the soft, reconciliatory approach which has so far been adopted by both the Beijing and Hong Kong administrations, might not be able to stop the conflict between the State and the rioters, who are clearly being financed and ideologically outfitted from abroad.

The more reasonable China is, the more aggressive the actions and threats coming from Washington and its allies are. COVID-19, the situation in Hong Kong, international trade, Taiwan and the South China Sea; all gets thrown into a huge, filthy wok, and stir-fried until it becomes a tasteless, foul smelling mess, which is then thrown straight into Beijing’s face, endangering the global peace, prosperity and well-being.

“Beijing has lashed out at US legislation which seeks to impose sanctions on China if it fails to cooperate with Washington’s investigation into the coronavirus pandemic.

The bill would require the president to notify Congress within 60 days that China had “provided a full and complete accounting” to any US-led probe into the coronavirus outbreak. The rule would also apply to investigations carried out by American allies and UN agencies such as the World Health Organization (WHO).

The legislation also demands that China shutter all “wet markets” which can pose a risk to human health. It also calls for the immediate release of Hong Kong activists arrested during ongoing protests in the semi-autonomous territory.”

Neocon politicians in Washington, and even the U.S. President himself, are demanding big concessions from China, without offering anything in return.

The confused, depressed and beaten down citizens of the United States, many of them unemployed, some now even starving, are hardly paying any attention to the foreign policy of their country, let alone trying to stop it.

The rioters in Hong Kong have to be confronted with one fact, which many of them most likely do not realize: this is a moment when the entire planet as we know it, may go up in flames. The United States, with its economic system collapsing, is dragging China, Russia, but also Iran, Venezuela and other countries, into a conflict, and consequent war.

Such a war could cost millions, even hundreds of millions human lives.

So far, China and Russia are sticking to diplomacy. Of course, it is hard to be restrained, when faced with insults, foul propaganda, and constant military provocations. But global peace, and precisely those millions human lives that would vanish during a confrontation, are making Beijing and Moscow act in subtle, measured, ways.

But anything could happen. Patience is not limitless. If China or Russia were to feel that their existence, or the existence of their people, was in danger, they would have to react, in the name of protecting life itself.

The rioters in Hong Kong are already at the frontline. They may not realize it, in their naïveté or their foolishness, but they are.

Whatever they do, is being monitored, recorded and eventually used against their country.

They are engaged in a battle, now. And they are fighting on the side of the foreign powers which want to fully control the world.

Are the rioters committing treason? Some clearly are. But I also want to believe that most of them don’t. Not yet. I want to give them the benefit of doubt. Most of them are young, confused and even lost.

However, this benefit of doubt should have clear boundaries.

Paradoxically, if the United States decides to push China into a confrontation, the situation in Hong Kong will be one of the justifications given by Washington. At that very moment, the naïve and badly informed kids would be converted, by circumstance, into de facto combatants, fighting against their motherland. With all the due consequences.

Let’s do everything we can, that such a dire situation is avoided!

The rioters should be told: “There is still time. Sit down and talk, negotiate. Do not fight against your country as mercenaries. These are terribly dangerous times, and forgive me for saying it so frankly: I have been observing you for quite some time. You don’t really know what you are doing!”

Andre Vltchek is a philosopher, novelist, filmmaker and investigative journalist. He has covered wars and conflicts in dozens of countries. Six of his latest books are “New Capital of Indonesia”, “China Belt and Road Initiative”, “China and Ecological Civilization” with John B. Cobb, Jr., “Revolutionary Optimism, Western Nihilism”, a revolutionary novel “Aurora” and a bestselling work of political non-fiction: “Exposing Lies Of The Empire”. View his other books here. Watch Rwanda Gambit, his groundbreaking documentary about Rwanda and DRCongo and his film/dialogue with Noam Chomsky “On Western Terrorism”. Vltchek presently resides in East Asia and Latin America, and continues to work around the world. He can be reached through his website, his Twitter and his Patreon.

Filming in the most depressing city on Earth – Jakarta