Honduras: ” They want to terrorize the communities that fight to defend their territory” 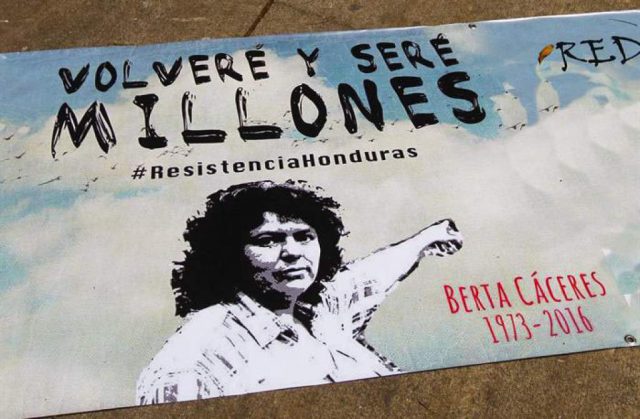 In Honduras, seven months after the murder of Berta Cáceres, the environmentalist leader renowned for her tenacity in the fight for the environment and the rights of indigenous communities, a new assassination attempt took place against Tomás Membreño, the new leader of the Civil Council of Popular and Indigenous Organizations of Honduras (COPINH). We talked to Bertha Zúñiga, daughter of Berta Cáceres, to understand the causes of this widespread violence against all those who denounce the policies of the Honduran government together with corporate and media elites. Although there are a several ongoing criminal investigations, there seems to be little reason for hope in the near future…

Just a month after the murder of Berta Cáceres, Jon Yon Kim, the president of the World Bank, justified in these terms the construction of the hydroelectric dam Agua Zarca by Honduran company DESA: “people [in Honduras] need energy. There’s a lot of critique of hydro-power but they are going to put it in place anyway”. (1)

And so the Lenca peoples’ defense of their land and the murder of Berta Cáceres are small matters for an organization that declares “a world free of poverty” as its final goal: “you cannot do the work we’re trying to do and not have some of these incidents happen”. What he did not expect was to receive a letter signed by 313 organizations from around the world, contesting these statements and reminding him that “according to the World Bank’s internal policy, the Bank and other financial institutions must ensure respect of human rights in the projects they finance”.

Everything points towards a carefully planned repression, and not a few isolated incidents. In late June, a Honduran soldier leaked a list of militants “to be eliminated”. On July 10th Lesbia Yaneth, mother of three and also a member of the COPINH, was assassinated. Over the course of the last decade, the number of environmental activists from this small country who have met the same fate has risen to 114. Before Cáceres’ murder there were 33 instances of death threats against activists who opposed the Agua Zarca project in the Gualcarque river. Since then, five activists who had publicly opposed this project have been killed.

On October 9th, in separate incidents, unknown groups opened fire against two COPINH leaders, including the current General Coordinator of COPINH Tomás Membreño. Bertha Zúñiga talks about the health condition of her comrade and the state of insecurity after such a serious event:

“The attempt against Tomás was meant to terrorize the people that will strongly fight to defend their land. It is clear that for as long as there is this reign of impunity, which has allowed for the murder of several of our comrades, and the harassment from companies like DESA prevails, sooner of later these kinds of actions will claim other lives. Comrade Tomás remains steadfast in this struggle and has taken some security precautions to avoid being exposed, but there is a generalized concern from all of us in COPINH”. (2)

For several months, the dam projects in the Negro and Gualcarque rivers have given rise to the mobilization of opposed local communities. COPINH has worked to stop these projects while continuously facing threats and intimidation. Zúñiga talks about powerful forces behind these constant attacks: “What’s behind all this is the economic interest of powerful groups that stand to lose their investments because of the struggle of COPINH and local communities, they know that a defeat of Agua Zarca will be a powerful precedent in the struggle for land rights. Spreading fear is part of their strategy to set up these projects in spite of opposition from local communities.”

Sacrificing a few pawns to save the “Queen”

Bertha Zúñiga seriously doubts that government authorities can play a role in stopping the violence against indigenous communities: “The authorities keep repeating the same negligent and inept actions that led to the murder of Berta Cáceres. They keep showing no political will towards defending activists. To this day, they haven’t enacted the precautionary measures recommended by the CIDH after the murder of the general coordinator of our organization”.

In early May, four suspects in the murder of Berta Cáceres were arrested, and three of them were employees of DESA. While one of these was a retired army captain, the fourth one was an active army officer with the rank of Infantry Major. At this moment, the relatives of Cáceres highlighted the links between the suspects and the company, considering them “sufficient reason to suspend the hydroelectric project… immediately and indefinitely”. (3)

These days, after several months have passed, Bertha Zúñiga reflects on the depth of these connections: “the oligarchic groups have great influence, they mobilize the army to repress people. We should point out that since the 2009 coup many military people have become shareholders in extractive industry projects (hydroelectric, mining, and others). But the corrupt mafias also allow for the organization of criminal groups that work in coordination with major corporations, like this case of DESA-Agua Zarca”.

On October 14th, the vice-minister of the State Secretary of Natural Resources and the Environment, Dario Cardona Valle, was arrested due to irregularities in the environmental license granted to the Agua Zarca hydroelectric project in 2013. But Zúñiga questions the limits of the ongoing investigations: “The arrests that have taken place up to now are just a smokescreen to create some sense of justice, but still no measures have been taken against the DESA company which was directly implicated in the murder of Berta Cáceres. If this is what happens in such a high profile case, what should we expect from all the other episodes that COPINH and its members have faced for years? Quite the opposite of justice, since state agents have played their part in the harassment, repression and even assassinations”.

Her testimony and warnings should move us to create a far-reaching, international solidarity movement with the indigenous communities, the Honduran people and their struggle.

* Alex Anfruns is a lecturer, journalist and editor-in-chief of independent media outlet Investig’Action in Brussels. In 2007 he helped direct the documentary “Palestina, la verdad asediada. Voces por la paz” (available with catalan, spanish, english and arabic subtitles). Between 2009 and 2014 he made several trips to Egypt and the occupied Palestinian territories. He has edited the monthly Journal de Notre Amérique since 2015.