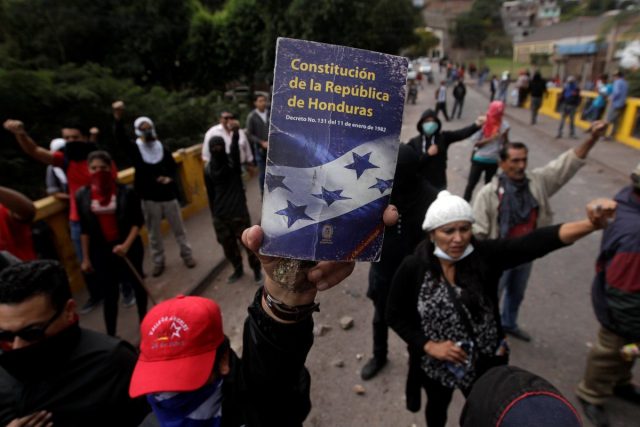 For over two months, the Opposition Alliance has claimed that their candidate, Salvador Nasralla, was the winner of the presidential elections of November 26. Gilberto Ríos Grillo is a national leader from the LIBRE party, one of the parties that makes up the Alliance, whose secretary-general is Manuel Zelaya, the former Honduran president who was deposed in a coup in July 2009. After the announcement of further mobilisations from the Honduran society to protest against the government, Ríos Grillo tells us about the recent developments in this social and political crisis that has already generated 34 casualties. He also stresses the international dimension to this crisis that Honduras is currently facing.

In late December we saw these controversial statements from the US State Department, legitimising the fraud that had taken place in your country. How do you evaluate the situation from an international perspective?

In general, the international situation we are witnessing is of struggle. Even though Honduras is a small country, it is quite important to the United States. So in this fight for hegemony Honduras is not allowed to join the struggle.

After the almost total loss of legitimacy by the Honduran institutions, especially after the 2009 coup, the 2013 fraud and the most recent fraud which is even more blatant than the previous one, the “seal” of approval for the elections came from the US Embassy itself through Mrs. Fulton, the chargé d’affaires.

The picture is very clear at the moment when she recognises the electoral triumph of Juan Orlando Hernández, because the president of the Supreme Electoral Court, David Matamoros Batson, appears on television with his hands in his pockets, standing behind the US official, as if assuming that she is the one who needs to certify or rubber-stamp the electoral process. The American meddling right in the face of the international community and the need for them to directly intervene in Honduras is plainly evident.

What is this struggle that you were mentioning?

In the past ten years there was clear progress for the left in Central America, with the victory of the Sandinistas in Nicaragua, the FMLN in El Salvador, even the left in Costa Rica. Also with the out of control situation seen in Guatemala, because even though the American will was to remove the president, there was a considerable popular mobilisation.

In Honduras, if a leftist coalition became the main political force, this would mean a further loss of control for the United States in the region. What took place in Honduras should be seen in this context, and also in the context of the aggression against Venezuela and Cuba. These are countries with a clear positioning of national liberation which is articulated at a Latin American level. This explains why the US cannot afford to lose even the smallest of territories. Hence the current situation in Honduras. 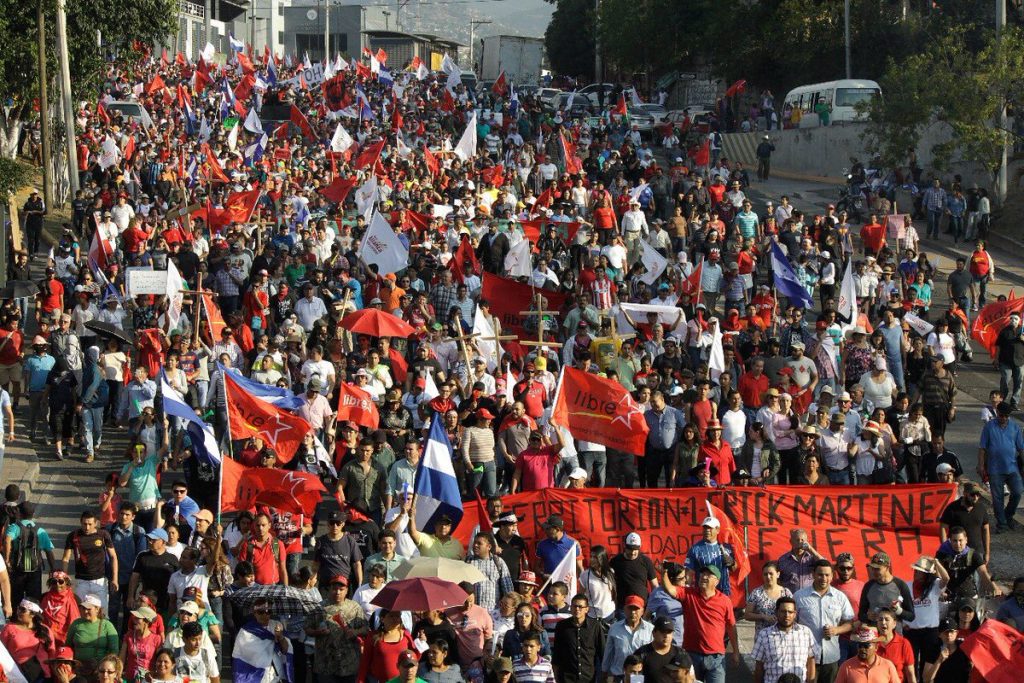 What was the position of the observers from the European Union and the Organisation of American States (OAS), who were present during the election?

In the beginning, after the elections, they had to recognise that Salvador Nasralla, the Alliance candidate, was the winner by a margin of more than five points, since given the amount of votes tallied this tendency was practically irreversible. They had to issue these statements because of the international presence.

Then, two days later, when the vote counting system crashed and the tendency was reversed, both the OAS and the EU had to produce reports saying that the situation was not clear. Even OAS secretary Luis Almagro had to say that the elections ought to be held again because the results were not transparent. That was the last we heard from the OAS.

Recall that the OAS has to supervise or play a legitimising role in more than 18 electoral processes in Latin America in 2018. So it could not afford to start the year by losing credibility, although it had already lost a lot of it… But the fraud was so blatant that it could not go along with it.

Both the EU and the OAS have purely formal positions, and they have no way of helping change come about in Honduras.

When Salvador Nasralla’s victory was not recognised there were attempts to divide the Opposition Alliance. After a visit to the OAS headquarters in Washington, Nasralla even went along with it…

This reveals Salvador’s naivete when it comes to politics, in fact even he recognises that. It is similar to what happened seven years ago to president Zelaya when he went to the Brazilian embassy two months after the coup. There he was visited by Thomas Shannon, a representative from the US State Department, and was also communicating with Hillary Clinton. Both told Zelaya that he would be returned to power, and he believed it.

In the case of Nasralla, he went to the United States after the fraud, to visit the State Department and congressmen and show them the evidence proving that we won the elections… And of course, they told him they would do everything possible to recognise his victory and not support Hernández…

But the United States always play a duplicitous game: they say one thing and then do something else. This always takes into account their interests and naturally the people that best serve their interests in other countries. In this case, Hernández is the best representative for the interests of the multinational corporations and the neoliberal/privatising rationale that the US has in Honduras. I think Nasralla’s naivete stems from his own lack of knowledge about the nature of imperialism.

During the holidays we saw the Alliance appeal to the Honduran society to resist in the streets. COPINH for example is well known abroad. What role have social movements played in the Opposition Alliance’s mobilisations?

After the coup, all the social movements, leftist movements, and a sector of president Zelaya’s party, formed the National Front of Popular Resistance. This then made way for the creation of the Liberty and Refoundation party (LIBRE), which stood in the 2013 elections and won them. After the coup there was also another party, formed by Salvador Nasralla, which was a centre-right party. These groups, alongside other smaller parties, such as the social-democratic party Innovation and Unity (PINU), decided to join forces and create the Opposition Alliance.

In the Opposition Alliance you can find all the national classes represented. In other words, even the national bourgeoisie, retail sectors, workers, social movements… nothing falls outside of the Alliance.
In what concerns COPINH, they were very important at a certain stage as a social movement but then moved more towards and NGO rationale. They also support the struggle against the dictatorship and have thrown their weight, but they are not important in terms of mobilisation. Especially after the assassination of Berta Cáceres, COPINH does not have the same militancy as before, and the same applies to other groups close to them.

The social sectors that have always been important here have been teachers, public sector workers, students, who had a very important surge in the past two years. All of these are in the Alliance and coordinate with the Alliance, under the leadership of Manuel Zelaya Rosales. 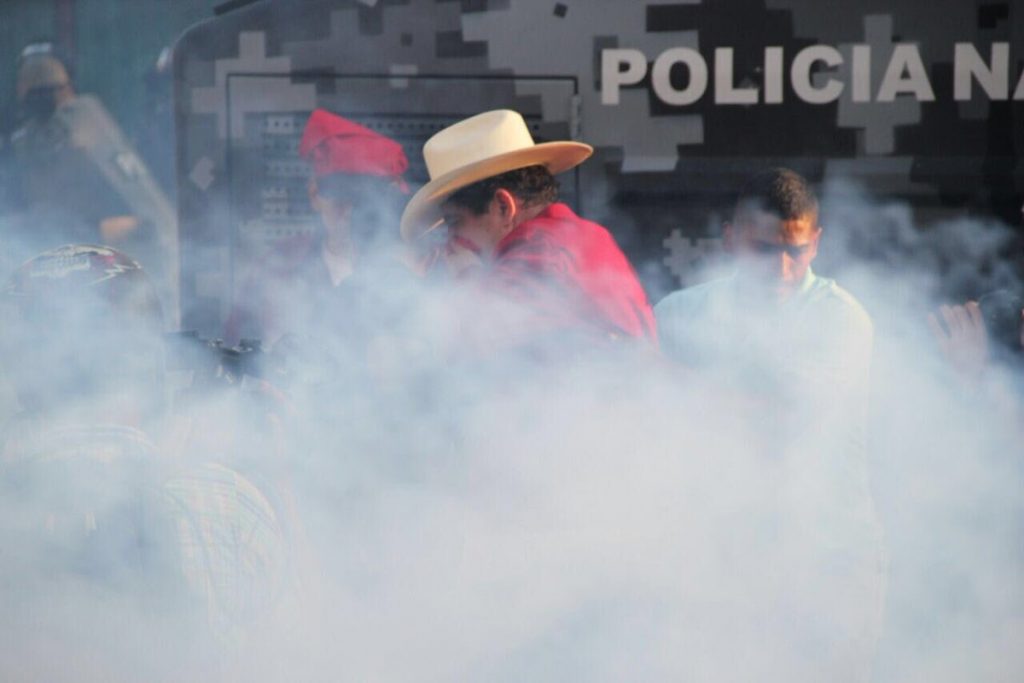 Former president Manuel Zelaya leading a protest in the midst of tear gas thrown by the police. 13 January, Tegucigalpa

A general strike was held on January 20. How do you foresee the upcoming mobilisations?

I stood as a candidate for these elections and I find that the support is bigger now than it was during the electoral process. And we should take into account that we won the election! There are more sectors of the population who wish to see Juan Orlando Hernández out of power.

The civic strike called for the period 20-27 of January is meant to be a full week of highway occupations, blocking streets, consumer boycotts, etc. We believe that it will have a much bigger impact than any previous demonstrations.

We can see that the people are mobilised and even demanding more radical action, although we wish to continue with a peaceful insurrection and civil disobedience, without ever calling for nor supporting violent action.

Source: The Journal of Our Americas / Investig’Action