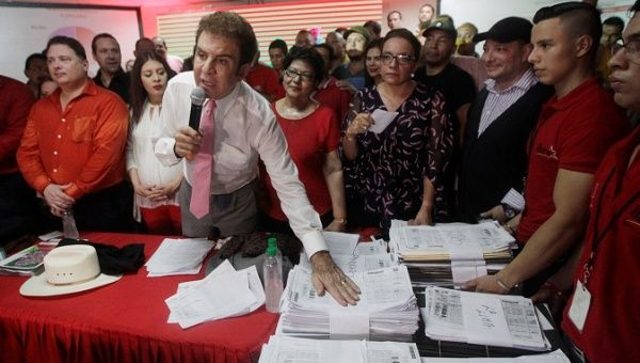 “They are seeing that fraud is being committed and that I really won the elections, but they do not dare say it officially,” said opposition candidate Nasrallah.

Honduras’ Opposition Alliance presidential candidate Salvador Nasralla has emerged from the thick of claims citing grave irregularities in the country’s recent elections, to announce that he will conduct a public count of votes should the Supreme Electoral Tribunal (TSE) declare current president Juan Orlando Hernández (JOH) as the winner.

“We have all the records where it is shown that we won, we are calling for public scrutiny, we are going to demonstrate with records that we won, regardless of what the Court speaks,” he told Sputnik Novosti.

The coordinator of his party, Manuel Zelaya, affirmed the same, chastising both the United States and the Organization of American States (OAS) for remaining silent.

“We do not recognize results in these conditions of arbitrariness,” he told teleSUR. “Arbitrariness continues to govern in Honduras, a dictatorship has been installed and there are human rights crimes.”

He assured that if there were claims of electoral fraud and delays in elections results “elsewhere, the OAS would have ordered intervention in the country.”

“As it is in Honduras, who are allies of the Southern Command and the Washington hawks, they protect what is happening in the country,” he added, emphasizing that “the OAS here has been too biased towards the government (of Hernández).”

“The Electoral Tribunal, which is totally at the service of the President of the Republic, is making people believe that with less than half of the results of the ballots they drew more than 118,000 votes than me — that is impossible,” Nasralla pressed Thursday.

Hundreds of Hondurans, supporting Nasralla and the opposition, took to the streets Thursday to demand election results be announced. The protesters were dispersed, with Honduran national police and military forces throwing tear gas at and chasing out opposition supporters from the area in front of the TSE headquarters in the capital of Tegucigalpa, according to teleSUR correspondent Gilda Silvestrucci.

“Honduras: in San Pedro Sula, the population remains in protest.”

The repression has resulted in 3 people dead and three people injured.

“This is a country where there are threats, the President of the Republic is the head of drug trafficking in Honduras, so (the TSE) are afraid to speak out, but in private meetings they have said that they are seeing that fraud is being committed and that I really won the elections, but they do not dare to say it officially,” Nasrallah pressed.

Heather Gies reports for teleSUR English in the video below: