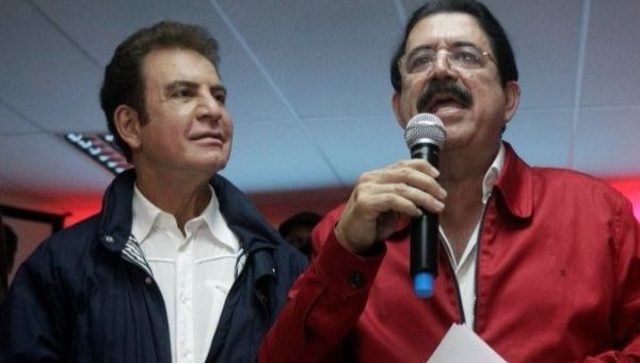 Opposition candidate Salvador Nasralla has accused the government of committing a major fraud and “whitewashing” of a corrupt electoral process.

The Supreme Electoral Tribunal of Honduras or TSE has officially declared that lawyer and incumbent President Juan Orlando Hernandez has won the country’s scandal-plagued presidential elections which resulted in weeks of unrest and accusations of fraud by the country’s broad leftist popular forces who united behind contender Salvador Nasralla.

According to the TSE’s official ballot count, Hernandez won the Nov. 26 elections with 1,410,888 votes amounting to 42.95 percent of total ballots cast, narrowly beating Nasralla by a razor-thin margin of 1.53 percentage points.

Hernandez, a 49-year-old lawyer with middle-class social roots, has a “law and order” reputation for having spearheaded a harsh crackdown on drug cartels and criminal gangs during his first term in office.

While Nasralla, a 64-year-old journalist and businessman, is one of Honduras’ best-known faces and was backed by former President Manuel Zelaya, a leftist ousted in a Washington-backed coup in 2009.

Amid the controversial declaration of victory, head of the Electoral Observation Mission of the Organization of American States (EOM/OAS) in Honduras and former Bolivian President Jorge “Tuto” Quiroga said, in a presser, that a number of unexplained discrepancies were found in the electoral process.

Quiroga explained that the absence of an audit trail creates additional challenges to properly assessing the result of the polls and the entire process will be examined by the mission. 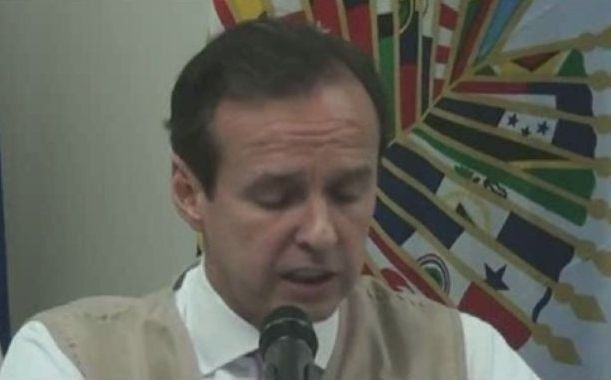 The lead observer fingered quality control during the election as a major issue regarding obtaining clearly established figures, adding that the systems and procedures may not have been equipped to shoulder the process workload.

The announcement will likely feed the unrest that’s engulfed city centers across Honduras, where popular forces have united behind an Opposition Alliance that has held massive protests while accusing the government of using gangs to terrorize the population and engage in looting in an attempt to delegitimize the pro-Nasralla forces.

Reacting to the TSE’s announcement, Zelaya tweeted a call for immediate street mobilizations across the country “in all public places.” The popular former president remains a powerful figure in the Opposition Alliance.

Zelaya later said during a press conference that  “We are in another of the most important moments of our history (…) The solution to this national tragedy is in the hands of the Honduran people,” the ex-president reiterated.

On Sunday, Nasralla traveled to Washington, D.C. to meet with Secretary-General of the Organization of American States Luis Almagro to personally convey his disappointment with what he described as the “fraud” that characterized the country’s electoral process.

Just prior to the election, Nasralla appeared set for an upset victory over Hernandez. However, the ballot-counting process suddenly halted for more than a day and began leaning in favor of Hernandez after resuming. 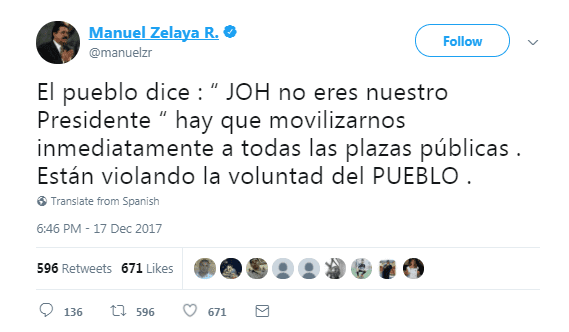 “The people say: ‘JOH is not our President,’ we must mobilize immediately in all public places. They are violating the will of the people.

Nasralla said that if the TSE proclaimed him to be president-elect of Honduras he would return to the capital Tegucigalpa for celebrations, but if Hernandez is declared winner he would “humbly return to see the reaction of the people”.

He also said that while visiting the United States he would meet with representatives of the State Department and human rights organizations to seek a solution to the political crisis which has left at least 18 people dead.

“Among all the possible solutions to the crisis, none allows for the whitewashing of an electoral process characterized by serious crimes committed by different people under the auspices of the Electoral Tribunal, which has sought – regardless of the costs and the risks – to impose these fraudulent election results,” he added.

The opposition candidate also stressed that he would act “with responsibility and a patriotic sense to seek a peaceful solution to the problem caused by their intention to illegally remain in power at any cost – regardless of the humanitarian, economic, social and political consequences for democracy.”

“It is clear that there was fraud before, during and after the elections (…) The President of the Republic at this moment is an impostor, and the Honduran people know it,” Nasralla said in a video posted on the Facebook.

Following the 2009 coup that ousted Zelaya, Honduras was plunged into a brutal cycle of violence where vulnerable civilians – including Indigenous people, social rights fighters and human rights defenders – were targeted for murder in the thousands. The Central American country became deeply mired in endemic poverty and criminal activity by violent drug gangs as it earned the ignominious title of being the “murder capital of the world.”

The country also hemorrhaged desperate migrants and refugees – including many children who were unaccompanied by parents – desperate to flee the brutal social conditions reinforced by the U.S.-installed neocolonial government that took the place of Zelaya’s center-left administration.