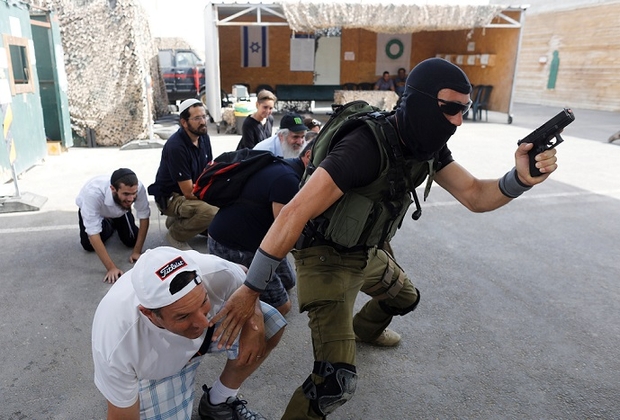 Terror tourism is all the rage in the occupied West Bank – as Israel turns its vast experience in occupation and war to entertainment propaganda for gung-ho visitors.

Just when you thought the Israelis couldn’t possibly cram any more items into an already overflowing repertoire of preposterous behaviour, Israel’s Haaretz newspaper recently ran a piece titled “Anti-terror Fantasy Camps Are Popping Up Throughout Israel and the West Bank – and Tourists Are Eating It Up”.

(And if that’s not enough preposterousness for you, Haaretz suggests you also read “Israeli army shows fake amputated limbs, paints wounds on kids for Independence Day”.)

The fantasy camp dispatch begins in the illegal Israeli settlement bloc euphemised as “the Gush Etzion region of the West Bank”, where one fine morning tourists from Hong Kong are “pretending to be Israeli army commandos” at a counter-terrorism and security training academy by the name of Caliber 3:

“As their Rambo-like trainer barks out orders, they move their assault rifles into position and, using the Hebrew word for fire, repeat after him: ‘Esh. Esh.’

“‘Louder,’ he demands. ‘I can’t hear you guys. Don’t be so politically correct.’”

While political correctness may not be part of the tour package, lots of other things are – including “a simulation of a suicide bombing in a Jerusalem marketplace, immediately followed by a stabbing attack, a live demonstration with attack dogs and a sniper tournament”.

Super-tough visitors can sign up for a more advanced itinerary entailing “an Entebbe-like hostage-rescue mission”.

On this particular morning, the contingent from Hong Kong is joined by some American Jewish families who are also along for the Caliber 3 ride. One family, Haaretz tells us, is from New York’s Westchester Country, where the father is a “wealth adviser” at Morgan Stanley.

The adviser and his wife are reportedly “feeling relieved” that their 10-year-old son, who “got frightened by the sound of gunshots when he walked in and threatened not to participate” in the scheduled activities, is now “eager for his next turn shooting an assault rifle”.

Indeed, a spontaneous love affair with firearms should be music to the ears of any parent.

Lest we miss the moral of the story, Haaretz quotes the wealth adviser’s wife on the ultimate function of the Caliber 3 crash course: “Our boys now have a better understanding of what it takes to defend Israel and to keep Israel a Jewish state”.

We can only hope the Hong Kongers have internalised the same lessons.

According to the article, some half a dozen facilities in Israel and the West Bank currently cater to this variety of military tourism – because “local entrepreneurs figured out they could channel Israel’s vast experience in war and counterterrorism in this direction”.

And a lucrative channeling it is, with some facilities reportedly charging up to $600 per day per person.

Sweet of Haaretz, too, to contribute to marketing efforts.

To be sure, for entrepreneurs on the frontlines of the terrorism industry, the arrangement has long been a gift that keeps on giving.

The Israeli monopoly over the terror lexicon itself – which permits Israel to slaughter Palestinians by the thousands in alleged “self-defence” while any act of literal self-defence by Palestinians is condemned as terrorism – has been terribly rewarding not only in terms of facilitating Israel’s political and territorial objectives, but also in terms of international opportunities for Israeli individuals and entities to capitalise on the country’s repressive expertise.

This is how, for example, Israeli firms win contracts to help fortify the US-Mexico border.

In the case of the “anti-terror fantasy camps”, the business simultaneously generates a profit for those involved and assists in the global dissemination of pro-Israel propaganda under the guise of cool, alternative tourism.

Call it killing two birds with one stone – while Palestinians continue to be killed with more destructive equipment.

‘The most wonderful and moral army’

Haaretz, for its part, explains that while Caliber 3 and other military tourism facilities rake in additional funds by selling merchandise (“everything from T-shirts to hard-core military equipment”), they tend to downplay financial motives and instead “describe their mission in more idealistic terms[:] showing the world that all the awful things said about the [Israeli military] abroad have no basis whatsoever and that this is the most wonderful and moral army that exists”.

In one of the more aneurysm-inducing passages of the article, we are treated to a demonstration in which Zeus the attack dog “lunges at a ‘terrorist’ wielding a knife, forcing him to the ground while tearing into his padded coverall”.

Because Zeus is so ethically oriented, however, he backs off when the knife is dropped, meriting the following praise from an instructor: “Even the dogs in the [Israeli army] value human life.”

Perhaps Zeus is better trained than the humans in the same army who do things like bomb hospitals and launch air strikes against children playing football.

Meanwhile, Haaretz’s PR services apparently wouldn’t be complete without a quote from the CEO of Caliber 3 on what compelled him to turn his academy into a tourist attraction:

“One day, I sat there wondering whether a Jew in the death camp of Auschwitz could have ever dreamed that an academy like this would ever exist in Israel and that it would train members of the German army… And then I said to myself that I am going to open this place to the public to show what a long way the Jewish people have come in 75 years”.

When in doubt, bring up Auschwitz – a phenomenon the Palestinians had nothing to do with.

But as long as we’re on the subject, it’s worth recalling that plenty of Holocaust survivors have seen Israel’s so-called “progress” as instead the stuff of nightmares – based as it is on a policy of ethnic cleansing.

Maybe the Palestinians should get on board with some travel packages offering simulations of being pulverised by an Israeli missile or bulldozed in one’s home. That, at least, would really be terror tourism.