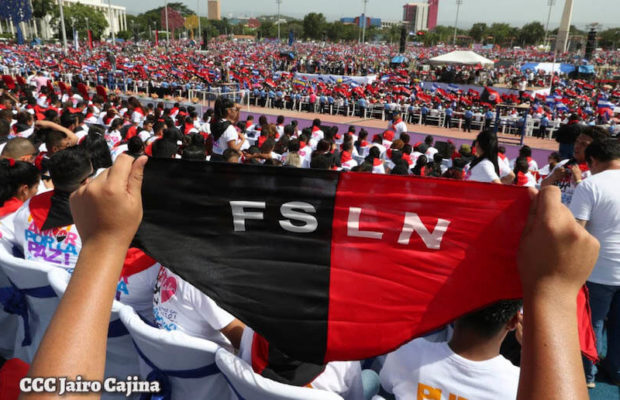 It’s been almost 200 years since the US declared that it would allow no more European colonies in the western hemisphere. A 100 years later this was twisted into a declaration that Latin America is exclusively the US’s sphere of influence, giving it a self-proclaimed right to interfere in other countries’ affairs.

The ‘Monroe Doctrine’, as it was known, deservedly fell into disrepute. But under President Trump it’s been revived. John Bolton, his national security adviser, announced in April that ‘the Monroe Doctrine is alive and well’. In May, he went even further: ‘This is our hemisphere!’ he told reporters after the failed coup in Venezuela.

The new version of the doctrine gives it a further twist. Bolton now claims to stand in defence of ‘democracy, sovereignty, security, and the rule of law’, aiming to make the Americas ‘free’ from Alaska to Tierra del Fuego. Of course, he’s the one who decides what ‘free’ means.

It won’t, for example, mean withdrawing support from a Honduran president who won a fraudulent election a year ago and runs one of the most repressive regimes in Latin America. Why? Because he is a Trump ally. No, Bolton intends to focus on what he calls the ‘troika of tyranny’: Venezuela, Cuba and Nicaragua, all the subject of sanctions because their heads of state are ‘the three stooges of socialism’ who look to Russia and China for support rather than the US.

So Trump has reversed most of the reforms initiated by Obama in US-Cuba relations, recognised an unelected head of state in Venezuela and blocked loans from international agencies for poverty-reducing projects in Nicaragua.

Of the three countries in Bolton’s ‘troika’ the oddest is Nicaragua. It has a president, Daniel Ortega, who won an election in 2016 recognised as fair by the Organization of American States; unlike its northern neighbours it barely contributes to the ‘migrant caravans’ that so annoy Trump and it effectively inhibits drug smuggling. Until a year ago it was also the safest country in the region.

Return of the Reaganites

What angers Bolton (and his special envoy Elliott Abrams) is Ortega himself. Bolton was part of the Reagan administration and helped to find ways to hide the funding of the ‘Contras’ that were attacking Nicaragua’s Sandinista government in the 1980s; Abrams was indicted for his role in covering up that scandal but was later pardoned by Reagan’s successor, President Bush. For both of them, a resuscitated Monroe Doctrine is not about freedom, it’s about getting rid of leftist governments.

Venezuela, Cuba and Nicaragua are all the subject of sanctions because their heads of state look to Russia and China for support rather than the US. Because this is what is at stake in Nicaragua. Ortega may have stretched the country’s constitution by standing for a third successive term of office, and he endorsed the ban on abortion, but even his enemies can’t deny that he’s systematically reduced poverty, has achieved the lowest inequality levels in Central America and fifth-highest ranking for the gender gap in the world according to the World Economic Forum, reduced illiteracy and increased life expectancy.

He ended the daily power cuts that occurred under his predecessor while doubling the proportion of homes that have electricity. Nicaragua is now one of eleven countries said to be leading the charge on renewable energy, aiming for its electricity supply to be 90 per cent renewable within the next year.

Rather than pursuing freedom, it’s pretty obvious that Bolton and Abrams are settling historic scores. Ortega bounced back from electoral defeat in 1990, so now he’s denounced as a brutal dictator. Yet the US administration is targeting sanctions not just at Ortega himself but at the programmes funded by the World Bank and other agencies that have been part of his drive to end extreme poverty.

Far stranger than the Trump administration’s policies, though, is that they are encouraged by progressive media, international NGOs and a good proportion of leftist opinion in both the US and Europe. How has this come about?

Ortega’s opponents in Nicaragua itself have never mustered much support in elections. So for several years they’ve instead accepted US funding for programmes that ‘promote democracy’ but which instead undermine it. As the website Global Americans put it (it’s funded partly by the Reagan-established National Endowment for Democracy), they were ‘laying the groundwork for insurrection’.

When student protests took place in Nicaragua last April against government social security reforms, US-funded NGOs were ready to manipulate social media to make sure the unrest spread as quickly as possible. Not only did this succeed, but international media bought wholesale the stories of ‘peaceful’ protesters suffering government attacks.

This continued even when the ‘peaceful’ protesters set up roadblocks in major cities and highways and began to kidnap, torture and kill police and government supporters (providing the evidence via their own horrific social media posts). It took until mid-July for the government to regain control. The conflict produced 253 deaths, including 22 police, 31 protesters (half were students), 48 Sandinista supporters and 152 members of the public.

By then, whatever popular support the protesters had gained had been largely lost after people had experienced the violence of the roadblocks. Not only that, but after the leaders of the protest had demanded Ortega’s immediate resignation they travelled to the US where they were welcomed by rightwing Republicans like Marco Rubio and Ted Cruz, and, of course, by the Trump administration itself.

Given the history of US intervention in Nicaragua, such tactics were doomed to cost the opposition much of their local support. Since last year, opposition protests have dwindled, the violence has largely ended and Nicaragua has returned to something like normality. Since February, a ‘national dialogue’ has resumed between government and opposition, which is steadily implementing a programme of reforms.

This is all well and good, but these developments are largely ignored by the international media and much of the Left. Headlines like The Guardian’s Ortega clings to power still appear even as a respected opinion poll showed he has support from 55 per cent of the population. Amnesty International campaigns for the release of those arrested in the protests while refusing to acknowledge that any were responsible for violence (such as the attack on a police station in Morrito on 12 July, which left five dead and in which nine were kidnapped).

Even New Internationalist, when it says that Nicaragua’s good guys have turned bad, refers to the Sandinistas but not to the opposition thugs who may have tortured them. Supporters of the protests who don’t live in Nicaragua have been blinded into thinking the opposition still has widespread support. It doesn’t. But the message that Ortega is a repressive dictator is music to the ears of Bolton, Abrams and the others who want to extinguish one of the few remaining leftwing governments in Latin America.

Exclusive interview with Nicaraguan Foreign Minister: “We call on the US to respect international law”