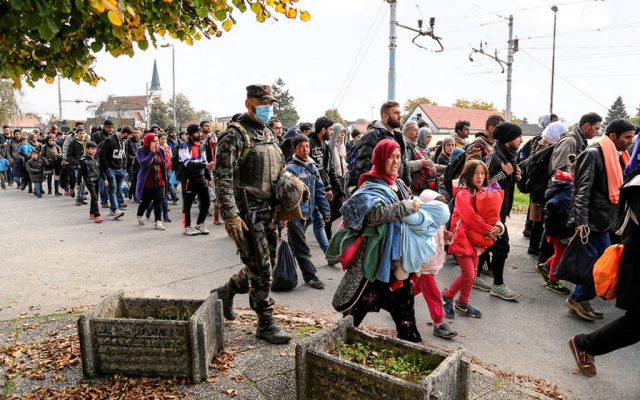 Trump, it seems, will not ban all Muslims. He’ll only ban Muslims whose countries and homes we are bombing.

In the coming days, President Donald Trump is set to place his signature on Executive Orders (EOs) temporarily suspending immigration, refugees, and visas from and for Iran, Iraq, Sudan, and Syria. Somalia, Libya, and Yemen could be added as “countries or areas of concern.” The list of countries may be familiar. They certainly ought to be. It is those which the United States has repeatedly sanctioned, droned, invaded, demonized, and attempted to dissolve as sovereign entities.

For the former, its meaning is that their day-to-day safety rests on the lack of safety of others – especially those Brown and Muslim. “National security” means the erasure of entire societies in North Africa and Southwest Asia, and slamming shut ports of entry to those wars’ human debris.

It also means building a wall, supposedly to keep out the Mexicans and Central Americans upon whose land the Southwest of the United States was built and upon whose labor entire industries in the contemporary South rest.

For the rich, “national security” is the security of their wealth.

National security, more bluntly, is a lie which always goes hand-in-hand with a truth, the actual result of the U.S.’s pursuit of security for the wealthy: national insecurity for countries on the U.S. target list. These seven nations which supposedly are repositories of human insecurity are actually victims of the inhumane US security state.

Iran, a “security threat” for its non-existent nuclear arsenal, is under sanctions from the only country in history to use nuclear weapons to annihilate cities, and the holder of a myriad of nuclear bombs and missiles.

Sanctions continue to cut Iran off from the world. Their goal, according to Iran expert Hilary Mann Leverett, has been to “increase hardship for ordinary Iranians,” in order to “get rid of a system that Washington does not like,” namely that established after the 1979 revolution.

To label Iraq or Iraqis as security threats is just an obscenity. Iraq is wracked with U.S.-induced chaos,after a decade of sanctions followed by a war of aggression which killed hundreds of thousands of people, at least.

Before these wars, and especially until 1980, according to the Lebanese economist Ali Kadri, Iraq’s government “undertook extensive asset distributional reforms, infrastructural projects, and heavy-industry development favoring the betterment of conditions for the lower strata.” As he continues, “The fact that the Arab socialist transformation was not more radical … does not mean that the socialist state-led developmental experience did not bring about structurally and historically positive social transformation.”

This is the kind of “national security” which the U.S. does not like. So it soon came to pass that Iraq’s national security – its electricity grid, sanitation system, hospitals, universities – was deemed a threat to U.S. “national security.” An illegal invasion followed. Its harvest was refugee flows and the desperate search for immigration. These exiles from Mesopotamia, in flight from intolerable U.S.-sowed insecurity in their nation, are now national security threats to the U.S.

In Syria, U.S. arming continues amidst the pursuit of “national security.” Over 1 year ago, the Washington Post reported on a US$1 billion-per-year “secret CIA operation to train and arm rebels in Syria.” According to the judgment from the International Court of Justice in USA vs. Nicaragua, the U.S., in “training, arming, equipping, financing and supplying the contra forces…(had) acted, against the Republic of Nicaragua, in breach of its obligation under customary international law not to intervene in the affairs of another State.”

There is no reason the law should not apply to the U.S. vis-à-vis the disaster in Syria. Indeed, as Syrian dissident-in-exile Rabie Nasser notes, the “United States is the main supporter of the opposition,” alongside “the most dangerous power in the region,” the Gulf countries. And whatever responsibility the Syrian government possesses for the current crisis, it is simply irrelevant given the enormity of the U.S. and Gulf role in destroying Syria. Those roles must be the primary concern of U.S. citizens. Until that responsibility is addressed, the war wends on.

And so does the refugee flow. For as Rabie writes, the war “is destroying the social fabric of the Syrian people, the culture of Syria, and of course destroying the idea of a future. Most people are trying to leave the country.” More so-called national security threats when they reach U.S. shores.

In Yemen, over 10,000 civilians are dead amid what is formally a Saudi Arabian war, one prosecuted with U.S. planes, U.S. munitions, and U.S. in-air refueling tankers. Across Yemen, posters plastered on walls read, “British and American bombs are killing Yemeni people.” Over half the population is “unable to meet their daily food needs,” according to the FAO. As the scholar of rural Yemen, Martha Mundy, comments, there is evidence that “the Saudis are deliberately striking at agricultural infrastructure in order to destroy the civil society.”

The war has taken place primarily to prevent any sort of national-popular unity and to encourage the continued fracturing of the country, especially along Shi’ite-Sunni lines, setting in motion vicious circles of social schisms, sectarianism, devastation, and de-development.

The Executive Order will lean heavily on Islamophobia to bolster the measure within public opinion. It may partially exempt those facing “religious-based persecutions,” under the assumption that Christians, Jews, and others are not safe under Muslim-majority government. In fact, compared to Europe under genocidal and exclusionary feudalism and capitalism, North Africa and West Asia for most of their history were multi-denominational and indeed refuges for the refugees of European intolerance. They removed or otherwise made deeply insecure native religious minorities only under the impulsion of colonialism and U.S.-supported Wahhabism.

Still, this does not really seem to be a Muslim ban. Muslim-majority countries that are loyal imperial outposts – Jordan, Saudi Arabia – are exempt. The listed countries are those upon whose people the U.S. has warred for almost 40 unceasing years. The number of refugees from these wars number in the millions.

After destroying their homes and countries, Trump wishes to forbid them entry to ours. This policy is savage and unacceptable. The borders ought to be open. Refugees are welcome here. The wars which make them and the men who make those wars are not.

Max Ajl is an editor at Jadaliyya.