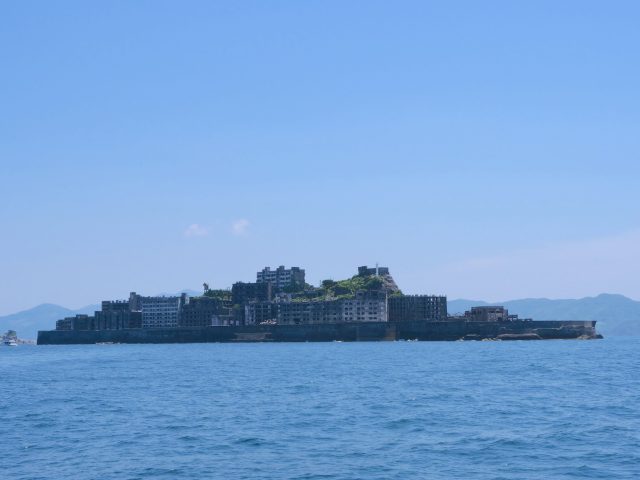 Do you want to see perhaps the spookiest island on earth – Hashima (also known as Gunkanjima – the Battleship Island) – which is located just 30 minutes by speedboat from the historic Japanese port city of Nagasaki? Now you can. Just book online, pay the equivalent of US$40, and then hop on one of those shiny sleek vessels belonging to Gunkanjima Concierge or to some other company.

Do it, and you will see the island which looks like an abandoned monstrous wreck; like a sunken and haunted ship.

You will sail around it. You will even be able to disembark and walk a few hundred meters on a fenced path. Guides/minders will let you take a few snapshots.

But that is all. No stepping left or right off the path. No going ahead of the group. No lagging behind. And please, no ‘provocative’ questions!

The guides are well trained to ‘entertain you’, to tell you just how ‘haunted’ the island is and how ‘vibrant’ it used to be in the past.

But were you to defy their written and unwritten rules, they’d immediately jump and appear next to you. They would even loudly scold you. Suddenly they’d become very rude.

The true horrors of the past will never be conveyed to you. It is all about WWII, and Japan is still in denial.

A Japanese tour guide (designated for the Japanese-speaking visitors) as well as a carefully prepared electronic recording for the English speakers, will recount countless details about the island’s geography and uncontroversial chapters of history, but close to nothing about the terror of the slave labor into which the Korean and Chinese people were forced into, during World War II.

“Unesco has decided to grant world heritage status to more than 20 old industrial sites in Japan after officials from the country agreed to acknowledge that some of them used Korean forced labourers before and during the second world war.

The 23 Meiji period (1868-1912) sites include coalmines and shipyards that Japan says contributed to its transformation from feudalism into a successful modern economy.

South Korea, however, had opposed the application for world heritage status unless clear reference was made to the use of an estimated 60,000 labourers forced to work at seven of the sites, including the island coalmine Gunkanjima, during Japan’s 1910-1945 colonial rule over the Korean peninsula.”

The issue of forced labor and Tokyo’s stubborn rejection to acknowledge it, delayed the inscription of the sites by UNESCO. However, in 2015, Japan yielded, and its delegation to UNESCO declared:

“Japan is prepared to take measures that allow an understanding that there were a large number of Koreans and others who were brought against their will and forced to work under harsh conditions in the 1940s at some of the sites”.

The sites, including the notorious Hashima/Gunkanjima, eventually gained world heritage status. In exchange, both South Korea and China expected Japan to highlight the suffering of their people during the occupation and WWII. The sites where forced laborers used to be held, were supposed to carry clearly marked and detailed explanations. But as in so many other cases related to its dark history, Japan did close to nothing to keep its side of the bargain. With the world heritage status, it got what it wanted, but gave almost nothing in return. 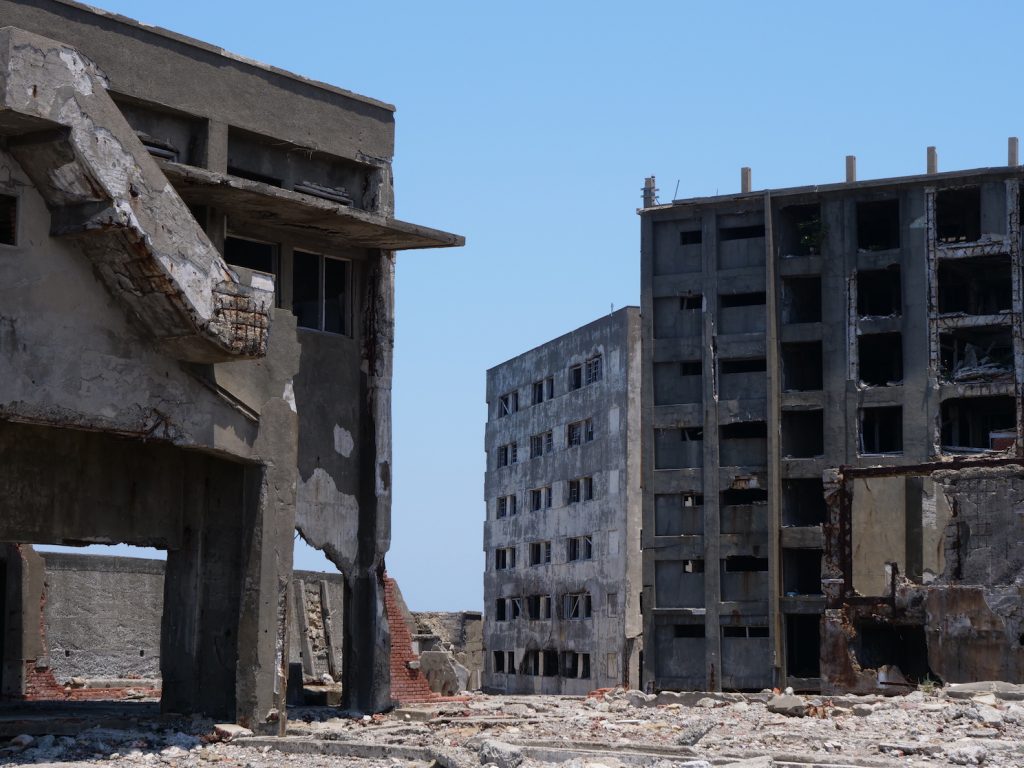 In May, I spent three days in Nagasaki, visiting my friend, a leading left-wing Australian historian, Geoffrey Gunn.

For many years, I have been coming to this city, searching for answers to a myriad of questions related to Japan’s and Asia’s complex past.

The past of Nagasaki has it all: great old Japanese culture, Christians and their prosecution, the Dutch traders and their settlement, a vibrant Chinese minority. Nagasaki was always one of the most ‘open’ cities in Japan, by choice or by force. But also, this is where the military ships were built, where many slave laborers were brought to from the occupied territories, and this is also where the second A-bomb was exploded by the U.S. at the end of WWII.

Seen from the roof of the imposing Nagasaki Prefectural Art Museum, the bay of the city is still dotted with WWII ‘relics’. Near the water, there is a huge crane, another fragment of an industrial UNESCO world heritage site. The crane belongs to the Mitsubishi shipyards, which have been, for long decades, producing and repairing Japan’s military vessels.

“Officially, Japan does not have a military,” I said, sarcastically. “But look, it is in possession of these huge battleships, docked at the other side of the bay.”

“You are lucky. They just arrived here,” said Geoff. “These docks played an extremely important role in the past. Gunkanjima mines also belonged to Mitsubishi. They were excavating coal there, and then building some of the largest battleships here, in Nagasaki.”

For the rest of the evening we discussed the bizarre refusal of the Japanese governments and public to acknowledge the past. Even now, more than 70 years after the end of the war, these issues are taboo: the genocide committed against the Chinese people, and the terrible crimes against the Koreans.

Often, when the past is mentioned, the famously polite Japanese people suddenly become defensive, even aggressive.

In 2015, Japan began literally blackmailing UNESCO, temporarily withdrawing its payment dues, after the United Nations Education, Science and Culture Agency listed the 1937 Nanjing Massacre documents in its “Memory of the World” program. The funds were eventually released, but the message was sent, clearly and patently.

This stubborn refusal to deal with the horrors of the past is bringing Japan closer and closer to the deadly embrace of the West, particularly the United States, and further and further away from potentially friendly relations with the rest of north Asia, particularly China.

After WWII, the so-called Tokyo Trial supervised by the US (also known as The International Military Tribunal for the Far East (IMTFE)) was clearly designed to punish just a few (28) individuals, while preserving the Japanese industrial, business and political system in its original form, so it could serve the interests of the West. After the trial, Japan was allowed to rebuild and to join the West in its aggressive policy towards the Asia Pacific. It played a significant role in the brutal Korean War, during which the West massacred millions of Korean citizens.

“Modern Japan has no foreign policy,” I was once told by the Irish academic and political analyst David McNeal, who is based in Tokyo. “It is strictly following the U.S. dictate. The same goes for the media coverage of the international events.”

David has no illusions about the Japanese take on its history:

“They are rewriting text books; they skip through WWII, dedicating to it only eight pages… Nationalism is rising… There is so much self-censorship in Japanese media, now. And the government is issuing ‘guidelines’, the so-called ‘Orange Book’, for instance: how to treat anything that is ‘contagious’… or anything related to history. There are instructions to writers and translators. For instance: ‘never use words like Nanking Massacre, except when you quote foreign experts’. Or ‘Yasukuni Shrine – never use word “controversial” in connection to it.’ We cannot write about ‘sexual slaves’ from WWII.”

The more ignorant about its past Japan gets, the more it seems to strongly dislike its former victims – China and Korea. According to a Pew Research Center poll (2017), 83% of the Japanese people have an unfavorable view of China. Korea does not fare much better. Both countries (PRC and ROK) are now clearly leaving Japan behind, when it comes to the economy and in the case of South Korea, the standard of living. The reaction of Tokyo: moving closer and closer towards the West, while adopting an increasingly aggressive policy towards two communist nations: China and North Korea. 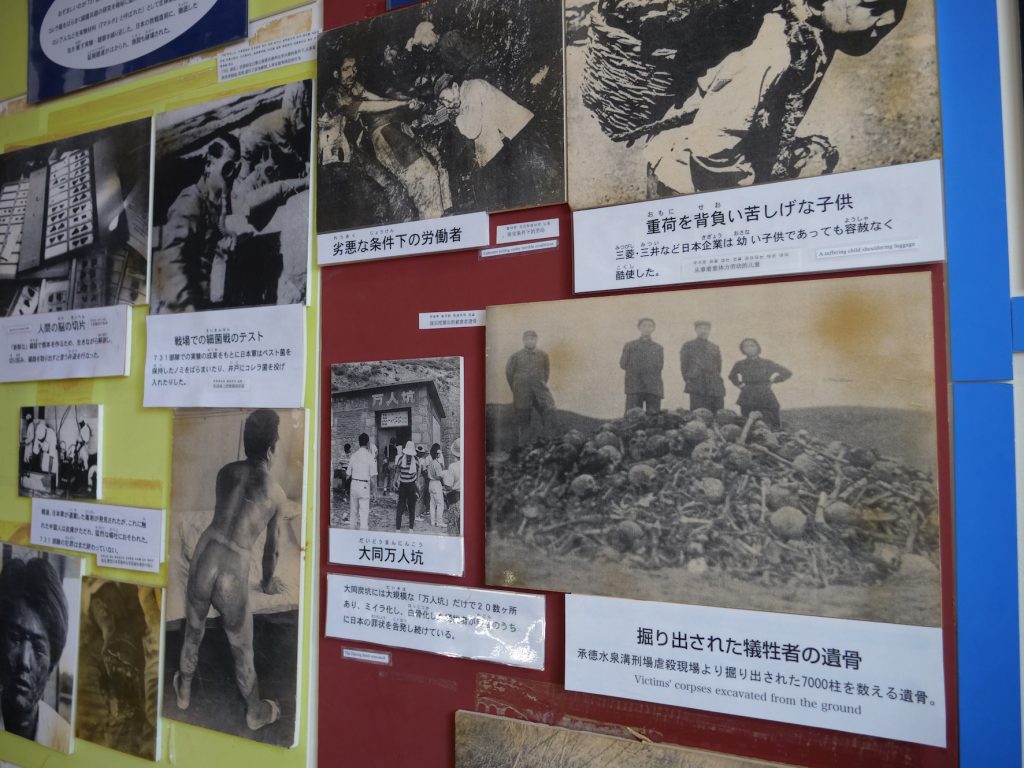 But back to the Battleship Island… You pay, and you get onboard. Right from the beginning, even before the vessel departs from Nagasaki, you get bombarded by outrageous propaganda: about that “samurai spirit” of Japan and the entire Nagasaki area.

There is continuous control, right from the start. You get up from your seat, and immediately someone approaches you: Where are you going? Do you want to change seat? No, you cannot sit here…” Guides (or call them minders) sound extremely rude: their English is primitive, while their obsession with all sorts of rules and regulations is fundamentalist.

An old dude who is here clearly in order to play the role of the main propagandist, is continuously clarifying things into the microphone. His voice is amplified, and his performance soon turns into an annoying and uninterrupted flow of verbal diarrhea. There is no space for reflection – no time to feel and to pause or let alone to ask some serious questions.

Whenever he stops, some cheaply-made video begins playing on the screen. Then advertisements of Kirin Beer are beamed.

The yacht is sailing towards the place that held thousands of people as slave laborers, where many died, where women were turned into sexual slaves. But the circus goes on. No reflection and no repentance.

On the island, I refuse to follow the group. I lag behind, trying to avoid loud noise and the herd of people. Of course, I soon get confronted by two “guides”, trying to push me back towards the flock.

I ignore them, keep filming.

They become aggressive. One shouts: “This is Japan. Follow our rules!”

I did not come here to be loved. The reason for my journey was simple: to determine whether the Japanese government sticks to the deal it made with UNESCO, Korea and China – whether it marks and commemorates the sites where forced laborers were pushed into an inhuman existence and work, and where some of them, died.

I found nothing of that kind: no information, no commemoration!

Back in Nagasaki, I asked for brochures explaining the past. There were no such brochures. The organizers of the island visits had no idea what I was asking about.

Later, the next day, professor Gunn took me to a small private museum managed by local Koreans, commemorating the terror which Japan committed against the Korean and Chinese people.

At least this is where the truth about ‘the most haunted island’ on Earth can be found. If one could find that tiny museum…

Gunkanjima – a ghost island which resembles, at least from a distance, a mighty destroyer; an island dotted with tall buildings now lacking windows and doors. An island where thousands of miners used to go down into deep shafts, some voluntarily, some by force. An island – Gunkanjima – where many people used to live, and many died. A place so mysterious and so unique, beautiful in its own way, but also both symbolic and horrifying.