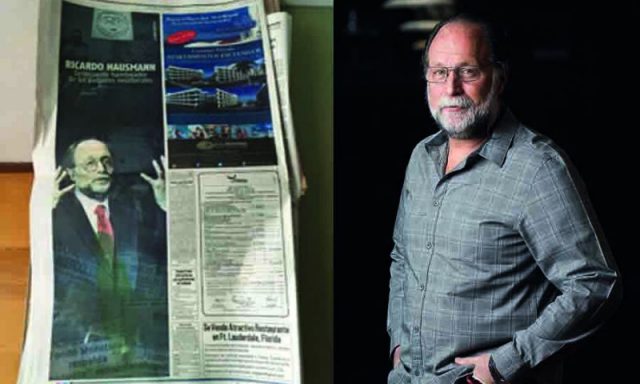 More specifically the Center for International Development (part of the Kennedy School of Government in Harvard), directed by Ricardo Hausmann (pictured), is the division that houses a wide number of financial hitmen placed at the highest levels. They are the al-Qaeda of finance.

What it is and what it is not

More than an educational institution with great prestige around the world, Harvard is a center for specialized training of financial, political and intelligence assets that will go on to be a part of the highest spheres in the most globally powerful institutions. Harvard is what it is because the only requirement is a close connection to financial power.

From there, giant corporations – the ones who truly wield power – select and place those who will be charged with fulfilling their plans – military, financial and political – in their main areas of influence, both in the global structures of power and in national governments, by placing them in key leading positions. Hausmann, a former planning minister in Venezuela’s 4th Republic, is evidence of this modus operandi.

Samantha Power (American ambassador to the UN and main player in the invasion of Libya), Barack Obama, the CEOs of JP Morgan and Goldman Sachs, Jamie Dimon and Lloyd Blankfein, Ban Ki Moon (former UN Secretary-General), Ben Bernanke (former chairman of the Federal Reserve), the infamous Henry Kissinger, the ex-CIA director during Obama’s first term David Petraeus, all the way to Leopoldo López and all the CEOs of the main corporations, they all share Harvard as alma mater.

The Center for International Development that Hausmann directs is funded by BBVA Provincial, George Soros’ Open Society, Standard Bank, the Inter-American Development Bank and many other economic foundations that are just fronts for the State Department as well as financial and energy corporate giants.

In every war for natural resources in the Middle East or in Africa, in every wave of privatizations imposed upon struggling countries, in every IMF package, in every experiment to destroy entire countries and populations, we can find a Harvard Boy making sure the investments are successful.

They are the best-prepared managers to make use of the steamrolling neoliberal globalization, doing away with taxes, national identities and cultural and economic borders in every corner of the planet.

Hausmann boasts of having been, along with his team, an advisor to over 80 governments, predominantly in Africa, Eastern Europe, the Balkans and Latin America.

The only difference between him and al-Qaeda, or a group of mercenaries fighting for Daesh, is that he wears a suit. A white-collared hitman does not need a machine-gun if he controls the “triggers” that decide if a country gets to eat – even if it’s little – or starves to death, in exchange for giving up everything, just like he did in the 90s in Venezuela.

How are Hausmann’s Harvard Boys connected to Henrique Capriles?

During the well-documented phone-call between Hausmann and Lorenzo Mendoza (1), the former commented that he had four Venezuelans at his disposal, and that he was working with them in order to lobby against Venezuela.

According to their Harvard University profiles, these four economists advised Henrique Capriles (2) on economic matters during his election campaign in 2013. That victory that never arrived was the red carpet for Hausmann’s return to being a prominent actor in directing the Venezuelan economy, putting it at the service and pleasure of the corporations, just like in the 90s, and reflecting the values of his alma mater.

Please don’t tell me they are “apolitical”.

Under the title “Possible Solutions for Venezuela”, a team of high-ranking financial operatives – unlike the low-level ones that advised Henrique Capriles – that gravitate around Hausmann and the Center for International Development he directs, carry out an exhaustive diagnosis of the country’s situation and elaborate a list of recommendations directed at opposition politicians in Venezuela, according to its own website.

And what is really important is not this diagnosis or the usual prescriptions that Venezuela has already experienced, but the operatives themselves, the organizations they chair, the people they advise and the positions they’ve held in the past, and who now join Hausmann in his mission of imposing a financial blockade against Venezuela. Let’s go through them one by one:

Roberto Rigobón. A Venezuelan national, he is a university professor and collaborator at Harvard’s Center for International Development. He’s a high-ranking advisor at the IMF. 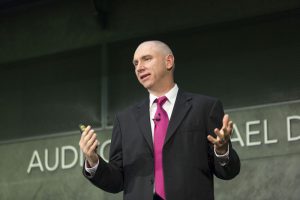 Lawrence “Larry” Summers. Former secretary of the Treasury during Bill Clinton’s second term, from 1999 to 2001. He was a candidate to the chairmanship of the Federal Reserve but lost out to Ben Bernanke. The Clinton clan rewarded him by making him president of the World Bank the following year. Before Trump’s victory he was an economic advisor at the White House. 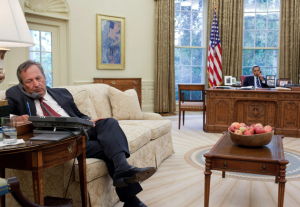 Dani Rodrik. Economist, university professor at Harvard and collaborator of Hausmann’s. Works directly for the Ford Foundation and has been an economic advisor to many European countries. He is part of the exclusive list of the 100 most influential economists, according to Economics and Finance Research. 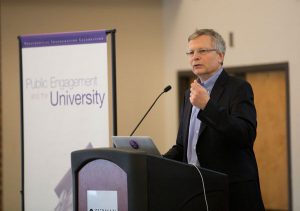 Carmen Reinhart. Harvard professor, worked in the research department of the IMF and is part of the council of economic advisors to the US Congress, as well as the Federal Reserve. According to Reuters and Bloomberg Markets, she is one of the most influential economists today. 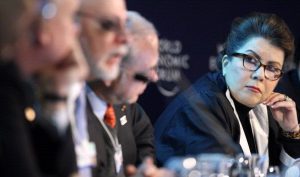 Andrés Velasco, a Chilean national, is a former graduate and current professor at Harvard, as well as a close associate of Hausmann’s. Velasco held high offices in the Chilean government – both under Patricio Aylwin and Michele Bachelet – and led the negotiations for the free trade agreements that his country currently has with the United States, Mexico and Canada. 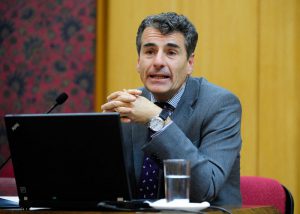 Olivier Blanchard. Chief economist at the IMF until last year, he’s a lead consultant for the American Federal Reserve and a current professor at Harvard. 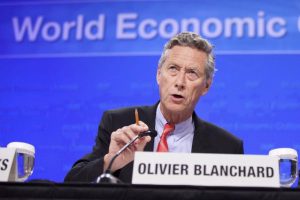 Erik Berglof. He was the first economist and special advisor to the president of the European Bank for Reconstruction and Development (EBRD). He is also a board member at the famous Brookings Institute (a think-tank closely aligned with the Democratic Party), and an advisor to European governments on matters of debt and financial engineering. 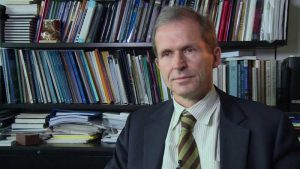 What are we up against?

Around Harvard and Hausmann we see an impressive gang of high-level financial operatives moving around and weaving powerful webs around the world, in the American corridors of power with all their overlaps with big corporations and in the institutions that control the global financial system, such as the IMF and World Bank.

As we have described in Misión Verdad throughout the year, the financial blockade operation against Venezuela has been spearheaded by the rating agencies – who constantly attack the country’s financial credibility – and by the manipulation of the country risk assessed by large international banks, such as JP Morgan and Deutsche Bank, to keep us away from the international debt markets.

But these banks and rating agencies, in order to attach some credibility to their calculations – which always point towards collapse – regarding Venezuela, cling to sources of the global financial system with connections to western corporations. Most countries in the world, subjected to the hegemony of the US dollar, shape their perceptions and their decisions with regard to a certain country from these assessments.

These sources are the IMF and the World Bank, and more specifically, the biased political opinions and projections from its directors, advisors and researchers (all colleagues and acquaintances of Hausmann’s), who manage to globally project a negative image to stop Venezuela from having access to any international credit, right at the moment where it desperately needs it after the fall of oil prices.

The crisis is proportional to this blockade. Its sustainability over time depends on the continued spinning of the two “wheels”, induced inflation and shortages, since both are reliant on the shortage of dollars that the blockade is generating.

And we are talking of an attack carried out by financial hitmen.

Venezuela has seen all the doors to receive credit from multilateral financial institutions slam shut, since their board members and high-level consultants are integrated in the financial harassment campaign that is led by Hausmann and paid for by the corporations that endow Harvard.

It has been barred from all financing from international banks, no matter the size or location, since in the main global economic forums where their directors participate and in the recommendations that come from advisors to the American Treasury Department or Congress to evaluate “the risks” of a credit operation, there will always be a member of “Team Hausmann” blocking the way, conditioning opinions and making any financial rapprochement with regard Venezuela much more difficult.

This extends to countries or groups of countries – Latin American, European or Asian – that the Bolivarian Government could reach out to at this time, since surely one of the aforementioned hitmen will be advising them, leaving them just a phone-call or an email away from a recommendation to not lend money to Venezuela under any circumstances. “As someone who studied and/or works at Harvard, I can assure you…”.

In every wide-reaching media outlet, financial or not, we will be able to find a hitman from this lot imposing this catastrophic economic perception, just like Hausmann did in 2010 when talking to CNN: “Venezuela is unravelling”. The blockade is the work of a network of contacts, but also one of words and perceptions. The aggressive approach does not come for free.

Behind any door that Venezuela can knock on, an agent from this financial network of financial hitmen will be found, pointing a gun to anyone who might consider offering us a loan or saying something positive about Venezuela.

The elites have unleashed their thugs, their academies, their employees of the month and their institutions so that they can squeeze where it hurts the most: the stomach. And while the damage is harsh and the situation is complicated, they haven’t managed to break our spirit. History is again putting it to the test.

(1) Lorenzo Mendoza is the owner of the food conglomerate Polar. A descendant of Venezuela’s wealthiest families and a cousin of Leopoldo López, he has consistently used Polar’s monopoly over food distribution, especially on staple items such as cornflour, as a weapon against the Bolivarian Revolution.

(2) Henrique Capriles is also a descendant of the colonial elites. A two-time governor of Miranda state, he was for a while the most recognisable face of the Venezuelan opposition. He ran for president twice, in 2012 and 2013, and was defeated both times.