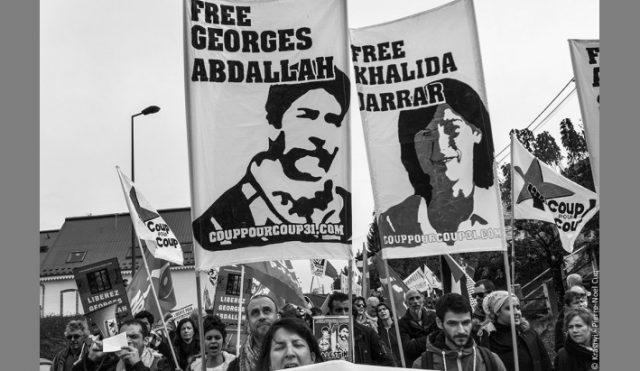 It was the highlight of a week-long international mobilization. On Saturday October 22nd 2016, 400 people marched to the penitentiary centre in Lannemezan, in the Pyrenees, to demand the release of Georges Ibrahim Abdallah (1). Two days later, the communist militant from Lebanon began his 33rd year of detention in France. He is one of the oldest political prisoners in Europe. Meeting with Suzanne Le Manceau of the Collective for the Liberation of Georges Ibrahim Abdallah (CLGIA) based in Paris.

When was the CLGIA created and what are its goals ?

It was formed in June 2004. It gathers militants with varying political views, aware that only an organized and consequential struggle can get revolutionary militants out of prison. The Collective drives and organizes activities with the goal of popularizing and mobilizing around the cause of Georges Abdallah, respecting his political identity while highlighting his communist, anti-imperialist, anti-zionist struggle. Before this, there was a support group in the Belgian collective Secours Rouge. Today there are numerous groups in France and around the world fighting for the freedom of Georges Abdallah.

Within the framework of the « unitary campaign », you called for a rally in Lannemezan on Saturday, October 22nd 2016. What conclusions have you drawn ?

The « unitary campaign », launched after the demonstration in Lannemezan last year, had the goal of coordinating all the local activities and intensifying the struggles to demand the release of our comrade. In this sense we are happy with the importance of this rally. It reflects the militant work of the local groups. This is evidenced by the presence, for the first time, of a group of young people from Saint-Denis, as well as people who had not heard of Georges Abdallah before.

The demand for the release of our comrade was reinforced by the multiple mobilizations and their diversity (2).

So you have the feeling that this demand is growing both in France and around the world ?

Yes. Georges Abdallah is getting more widely known and recognized. He has been named as an honorary citizen in three cities: Calonne Ricouart, Grenay, in Pas-de-Calais, and Bagnolet in the suburbs of Paris, in 2012 and 2013. He received the « Frantz Fanon » prize in 2014 and he is the honorary president of the Rouges Vifs and of the Front uni des immigrations et des quartiers populaires (FUIQP).

But relentless militancy is not the only reason for this success. The crucial connection between Georges’ struggle – his resistance to the oppression of prison and legal harassment, his fight for the liberation of Palestine, his solidarity with all the struggling peoples – and the commitment of our current struggles against police repression, against the organized roll-back of workers rights, against all forms of colonization, against racism, against these wars that throw thousands of migrants overboard, against the imperialist policies of our governments that create nothing but wars, misery and poverty, this connection is increasingly felt around us in France and also around the world. 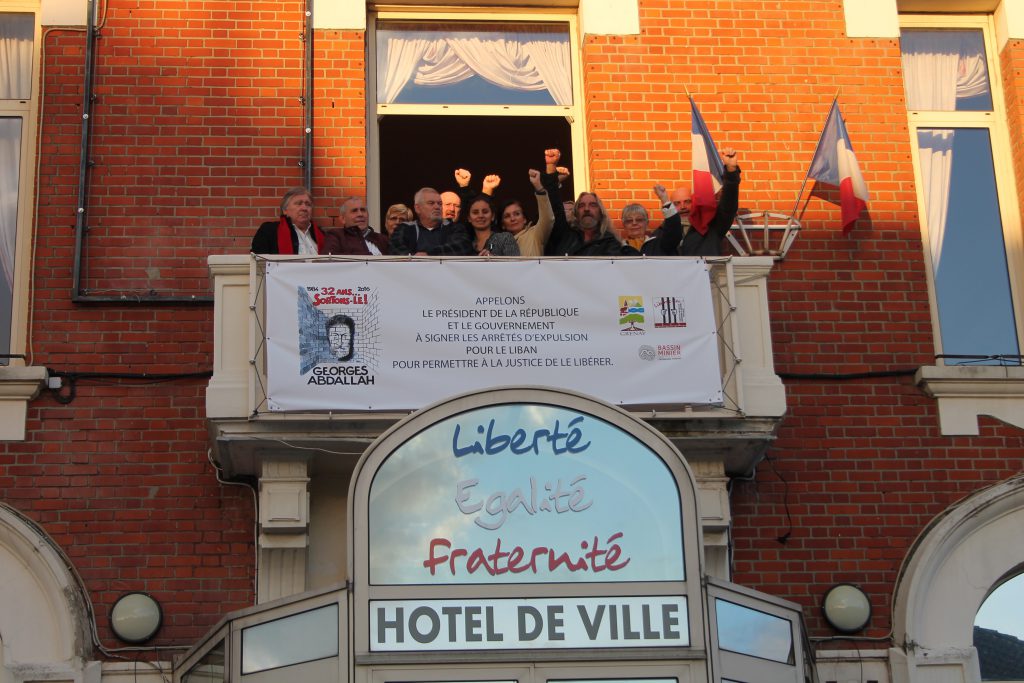 On the town hall balcony in Grenay

Georges Ibrahim Abdallah has appealed the judicial decision not to release him. How is that ?

The Court of Cassation ruled last September. It rejected the appeal submitted by Georges Abdallah in February 2015. His previous request for release submitted in March 2014 had been rejected in November by the Sentence Enforcement Court. And an appeal was also rejected.

The reasons invoked are always the same. To these we must add the fact that the political prisoner status does not exist in France, so Georges Abdallah must follow the usual procedure reserved for all detainees who request a conditional release. It is a partial freedom for a minimum of one year, with a job, and returning to prison every night, carrying an electronic bracelet. However there was talk of a release coupled to his deportation back to Lebanon, where he’s from.

An expulsion decree that Mr. Valls, then interior minister, refused to sign in 2013. And yet Georges Abdallah had pledged to leave French territory and never return. The Lebanese consular authorities were committed to managing everything from his release until his arrival in Lebanon. 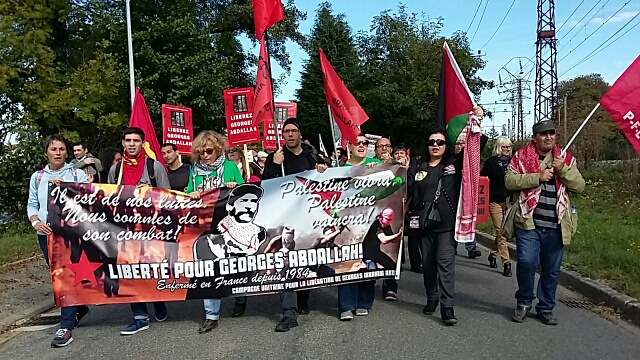 How do you explain this relentlessness from successive French governments in keeping him in prison ?

The successive French governments, be they from the right or left, have a class-based system of justice that they would have us believe as independent. Given the well-known and denounced interference from American officials with our ministers in 2003 and 2012, who did not accept the release of Georges Abdallah as ruled by the courts on those two occasions, we have no illusions on the subject. Finally, Mr. Urvoas, the current justice minister, has publicly referred to Georges Abdallah as an example of a life sentence (which normally does not exist in France…).

But alas, Georges Abdallah has not renounced himself for over 32 years. And the goal of judicial proceedings is to replace the political prisoner with a docile, repentant criminal. It is not enough that the revolutionary organizations no longer exist, they want to erase from the collective memory any trace that could be connected to legitimate contemporary struggles. As long as the prisoner behaves like a militant revolutionary, the bourgeois justice system will deny him any reduction of sentence. And also, his main fight has always been, up to this day, for the liberation of Palestine, so we can understand why he is kept in prison…

You have visited him often in Lannemezan. In which state of mind have you found him ?

For the past 8 years I have visited him regularly. I have always met a proud man, a communist militant who is firm and courageous, intelligent, cultured, friendly, highly respected by prison officers and fellow prisoners, very aware of the current affairs in our country, as well as those of the rest of the world, in particular with regard to liberation struggles that are taking place.

What are now the perspectives of mobilization for his release ?

Since it is useless to keep hoping for a judicial resolution, the upcoming mobilization should grow wider and stronger, making the context one of a global struggle. To achieve this, we need to join forces and multiply our actions in order to reverse the correlation of forces and ensure that, for his jailers and the heads of states, Georges Abdallah is a bigger burden as a prisoner than if he’s free. And we will strive for that.

USA : Welcome to the Trump show