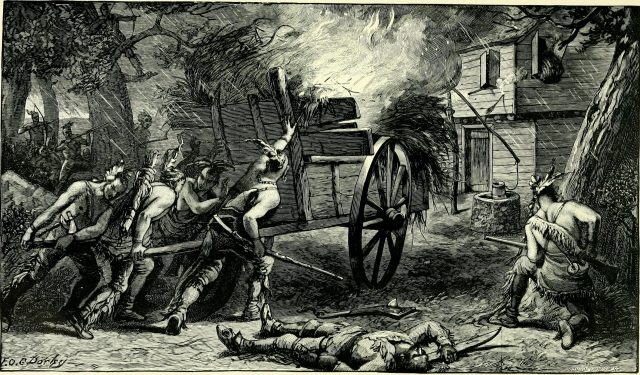 A table was set up for two, an advertisement table, a table with a photo of a giant turkey, two elegant plates, and a U.S. flag sticking out into the air.

“Thanksgiving at Angkor Royal Cafe”, a flier read. And: “23rd November… Join us for a traditional Thanksgiving Feast”.

This was at one of the international hotels in Siem Reap, a Cambodian city near the world architectural treasures of Angkor Wat and the ancient Khmer capital, Angkor Thom.

The same day I read an email sent to me from the United States, by my Native American friends, with a link to an essay published by MPN News, called “Thanksgiving Guide: How to Celebrate a Sordid History”. It began with a summary:

“While millions of Americans prepare this week to get into the holiday spirit, beginning with Thanksgiving, how many are prepared to view the day through an accurate lens? While to many Americans the holiday serves as a reminder to give thanks, it is seen as a day of mourning by countless of others. The truth is: European migrants brutally murdered Native Americans, stole their land, and continue to do so today”. 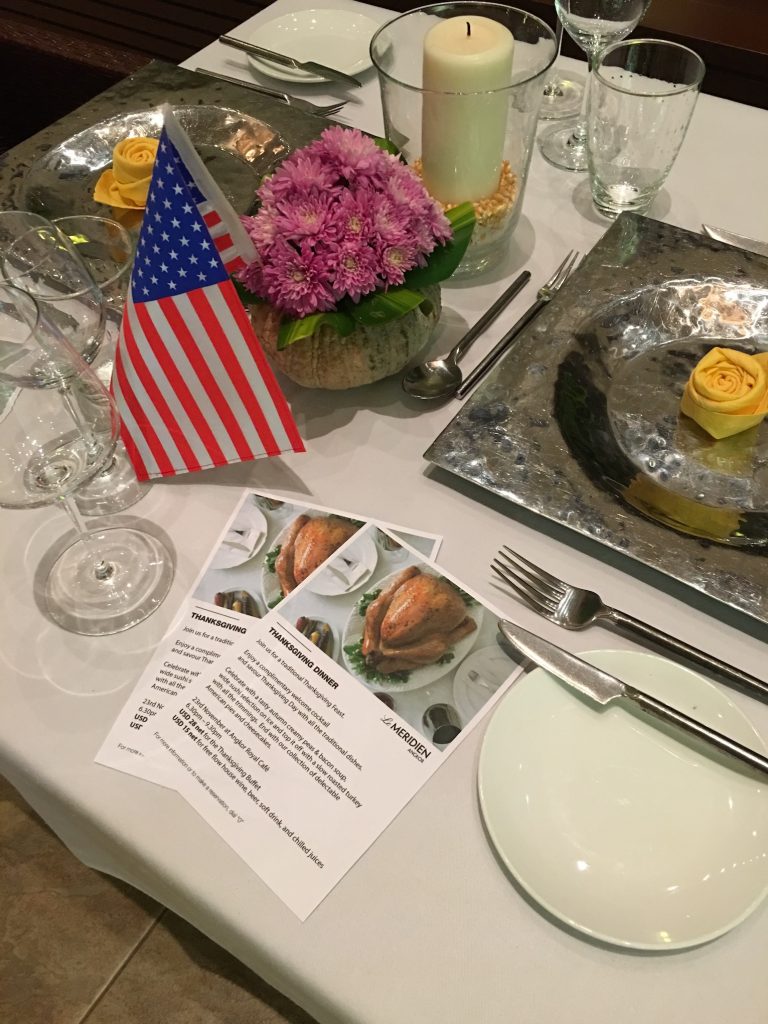 The day became an official day of festivities in 1637, to celebrate the massacre of over 700 people from the Pequot Tribe.

In a hotel, I approached a cheerful French food and beverage manager and asked him whether he was aware of what he was suggesting should be celebrated in one of his restaurants?

“Oh I know I know,” he replied, laughing. “It is a little bit controversial, isn’t it?”

“Bit controversial?” I wondered. “It appears more like you are inviting people to celebrate genocide, a holocaust, with free flowing wine and a giant turkey.”

“I am trying to see things positively,” he continued grinning at me. Then he summarized: “So I guess you won’t be joining us tonight? What a pity…”

“What a pity,” I thought, “what a pity.” I won’t get to eat that famous American pie tonight and turkey and who knows what else, just because I am not eager at all to celebrate the massacres and land grabs perpetrated by the Empire.

The manager couldn’t help asking: “Where are you from?”

I knew he would ask. No European would say what I was saying.

“Oh I see,” he gave me that ‘I should have guessed smile’.

I’m convinced that the French manager has been sincerely oblivious about what I was stating. He is supposed to be oblivious. There are, after all, ‘our genocides’, and ‘the genocides of the others’. ‘Our genocides’, those that we triggered or committed, should never be discussed. Or more precisely, it is extremely impolite to discuss them. Most of the people don’t even know about them, including many of the victims. On the other hand, the genocides committed by the others, particularly by adversaries of the West, are widely discussed, publicized, analyzed, inflated and very often even fabricated (All this described in detail in my 840-page book “Exposing Lies Of The Empire”).

Cambodia is the textbook case of the latter. Here, several decades ago, the U.S. and its allies first supported the hopelessly corrupt and brutal government in Phnom Penh, while triggering a monstrous carpet-bombing campaign of the Cambodian countryside, mainly near the border with Vietnam. This was supposed to prevent the country from ‘going Communist’, or at least ‘Ho Chi Minh style Communist’. Hundreds of thousands of villagers were murdered by the bombing. Millions were forced to hit the road, leaving their dwellings, as the countryside was converted into a giant minefield, covered by unexploded ordnance. Further hundreds of thousands died from starvation and diseases.

Furious, mad from suffering, the people of Cambodia rose against the collaborators with the West in Phnom Penh. Pol Pot and his Khmer Rouge took the capital virtually unopposed. Recently, deep in the jungle, I spoke to the former Pol Pot’s personal guards. I asked them point-blank whether they knew anything about Communism.

“Nothing at all,” I was told. “The U.S. was murdering our families, for no reason. Corrupt elites were selling the country to the West. We were all outraged, and ready for revenge. We would follow anybody calling for revenge.” However, the West is passing the events, to this day, as a “Communist genocide”.

Rwanda is yet another ‘case’ of a twisted narrative. I made an entire full-length documentary film – Rwanda Gambit – on the subject. There, the West turned the history upside down, reducing the entire tragedy into a primitive and easy-to-digest narrative of bad Hutus killing good Tutsis. Yet even the former U.S. ambassador Robert Flatten told me that his country groomed, armed and supported the deadly RPF, mainly Tutsi army, which had been, before 1994, raiding the Rwandan countryside from neighboring Uganda, burning villages and killing civilians. While a former Australian lawyer and U.N. investigator, Michael Hourigan, supplied me with information about the downing of the plane, which, in April 1994, killed both the Rwandan President Juvenal Habyarimana and Burundian President Cyprien Ntaryamira, while on the final approach to Kigali airport.

The orders to shoot down the plane were given by the RPF leader Paul Kagame, who was in turn sponsored by the West. This event triggered the terrible bloodletting on 1994. The next year, in 1995, the Rwandan army entered the Democratic Republic of Congo (DRC) and participated in the killing of at least 9 million people, mainly civilians, on behalf of Western governments and multi-national companies, making it the worst crime against humanity in recent history.

In fact, almost all the major genocides committed by the West or its allies in modern history, are ‘silent ones’, including those in Iraq, Syria, Iran, West Papua, East Timor, DRC, Indonesia, Afghanistan, Angola, and dozens of other unfortunate places all over the world.

The gruesome genocides committed by the West all over the world, during the last 2,000 but especially during the last 500 years, are never defined as such; never as ‘genocides’. Throughout history, European countries have been destroying, systematically, most of the cultures on all continents of the Planet, enslaving virtually all the non-white nations, plundering and looting its colonies (read: almost all the non-white nations of the world), while exterminating hundreds of millions of men, women and children. The death toll has been rising, accumulating, to near 1 billion, according to the testimony of one of my friends, a senior U.N. statistician.

I will return to the ‘Cambodian story’ soon, on the pages of this magazine. And I will be returning, again and again, to the genocides committed by Europe and North America, virtually everywhere. Unless the history is understood and acknowledged, the world has no future, and there can be no solutions to the terrible problems that our humanity is facing.

But for now, let me conclude this brief essay by saying that I did not participate in the consumption of turkey and American pies on Thanksgiving holiday, in the Cambodian city of Seam Reap.

My thoughts went to those 700 people from the Pequot Tribe who rebelled, stood firm and died for freedom, almost 400 years ago. These were some of the first fighters against Western imperialism. These were the ‘Americans’ that I admire, this is America that had been terribly damaged but not yet completely destroyed. No overly sugary, sentimental and empty words could fully choke its essence, as no gluttony and food orgies could ever fully silence the screams of the pain of those who died in the hands of the European invaders, during and after the conquest of what has been so cynically christened as the ‘New World’.

Cover photo: Threats to local culture, loss of land, forced acceptance of English rule and culture and abuses of the English led many Praying Indians (Native Americans who converted to Christianity) to take arms against the English, though the vast majority remained neutral and many served to protect the settlers. (source: Wikipedia)