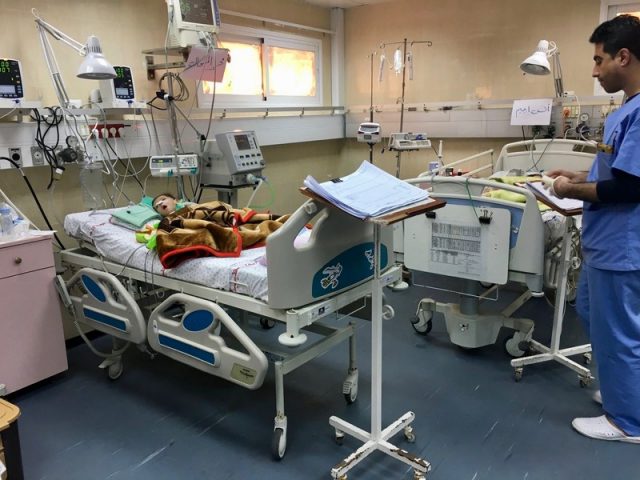 Emergency generators have run out of fuel in at least 19 health facilities in the Gaza Strip as Israel’s deadly decade-old siege on the territory tightens.

The health ministry in Gaza announced Tuesday that the generators have shut down in 16 primary care clinics and three major hospitals, but that medical staff have been ordered to stay at their posts and do what they can to assist patients.

On Tuesday, the UN humanitarian coordination agency OCHA warned that “emergency fuel for critical facilities in Gaza will become exhausted within the next 10 days,” unless donors step in to prevent a “humanitarian catastrophe.”

But for patients and medical personnel on the frontlines, the catastrophe is already happening, and it is only the latest chapter in the forced collapse of Gaza’s healthcare system.

At the al-Nasr children’s hospital, head of intensive care Dr. Raed Mahdi said that the lives of dozens of children in his unit are at risk.

According to the health ministry, Mahdi said overcrowding and pressure on medical staff and supplies had reached a crisis point at his hospital as children were being transferred there from other facilities that had lost all power.

At the Muhammad al-Durra hospital in eastern Gaza, named for a Palestinian child killed by Israeli forces in 2000 at the start of the second intifada, doctors said at a press conference Monday that entire departments had already shut down and some patients were being turned away.

Speaking at the press conference, Jamal al-Durra, Muhammad’s father, appealed for urgent international intervention, saying that to allow the crisis to continue would be to “kill my son a second time.”

Due to the chronic power crisis, dialysis in Gaza is already a dangerous business.

Al-Haq added that Gaza hospitals are currently unable to carry out 200 operations per day “due to the corruption and subsequent waste of hundreds of units of blood because of the lack of cooling required – a consequence of the deliberately imposed electricity shortage on Gaza.”

Due to Israel’s ongoing restrictions on Gaza’s electricity supply, the population of two million people, half of them children, currently receive electricity for no more than eight hours each day. At times that supply has plummeted to just three or four hours.

“Hospitals have already begun to close. Without funding, more service providers will be forced to suspend operations over the coming weeks, and the situation will deteriorate dramatically, with potential impacts on the entire population,” the UN’s acting humanitarian coordinator Roberto Valent said. “We cannot allow this to happen.”

“Gaza’s health system is on the verge of collapse as hospitals in the besieged territory are expected to face a total power blackout by the end of February,” Ashraf al-Qidra, the Gaza health ministry spokesperson, warned.

On 23 January, the Palestinian Authority health ministry in Ramallah allocated almost $300,000 to buy emergency fuel, but that supply would only be enough for 10 days and, according to Al-Haq, “will not resolve the structural electricity crisis imposed by Israel.”

While collapsing the healthcare system inside Gaza, Israel is also making it harder for Palestinians to seek life-saving treatment outside the besieged territory.

The number of Palestinians allowed in and out of Gaza, both through the Erez crossing, controlled by Israel, and the Rafah crossing with Egypt – which has been closed for years except with rare exceptions – fell sharply last year.

The exit of Palestinians from Gaza through Erez fell by 50 percent in 2017, compared with 2016, according to OCHA.

Israel’s approval rate for medical exits via Erez fell to 54 percent, down from 62 percent in 2016 – the lowest rate since 2006, according to OCHA.

“The decline is occurring alongside a gradual increase in the absolute number of referrals and related permit applications to West Bank hospitals in the wake of stricter constraints via the Rafah crossing,” the UN agency noted.

In November, Hamas authorities handed over control of the Palestinian side of the Erez crossing to the internationally backed Palestinian Authority, in the wake of a reconciliation deal signed the previous month.

“To date,” however, “this development has had no apparent impact on the passage of Palestinians from Gaza through the Israeli- and Egyptian-controlled crossings,” OCHA said.

In most cases, unsuccessful applications were due to lengthy delays or lack of response, rather than outright denials.

“In situations such as cancer treatment, delays can have life-threatening implications for patient health,” OCHA stated.

Sometimes, delays have been caused by the Palestinian Authority in Ramallah: over the summer its leader Mahmoud Abbas imposed sanctions on Gaza, including delaying approval of medical referrals to hospitals in the West Bank, as part of his effort to bring Hamas to its knees by exacerbating civilian suffering.

Some of these delays proved deadly.

Al-Haq this week called on the PA “to remove all impediments to access to healthcare for children traveling from Gaza, and to ensure urgent cases are immediately prioritized, for all cases within its competence.”

But there is no doubt where the overall responsibility lies.

As the belligerent occupier, “Israel has continued obligations to ensure the maintenance of civil life in the Gaza Strip, which includes the supply of basic services and infrastructure to the civilian population,” according to Al-Haq.

The group says that “that denial of travel permits leading to delays in accessing treatments, not only violates the rights to health and the right to life, but may also constitute inhumane, degrading treatment” that violates international law.

Yet on Monday, Israeli defense minister Avigdor Lieberman declared that there is “no humanitarian crisis” in Gaza.

That contradicted the assessment even of Israeli army chief Gadi Eisenkot who told Israel’s cabinet a day earlier, as Haaretz reported, “that the Gaza Strip is on the verge of collapse due to the worsening humanitarian crisis.”

Last week, Israeli diplomats presented a “humanitarian rehabilitation” plan for Gaza at a meeting of donors in Brussels.

“Israel expects the international community to cover the costs of the plan’s implementation, an estimated $1 billion,” the Israeli human rights group Gisha observed.

The group dismissed Israel’s plan as “feigned and simplistic,” noting that Israel’s crushing blockade on Gaza is what has caused the “dire humanitarian conditions.”

“The alarming state of Gaza’s infrastructure, its chances for economic development and the living conditions of its two million residents are largely dependent on Israel,” Gisha stated.

But Lieberman, the defense minister, made clear Israel will continue its policy of denying basic humanitarian services to civilians in Gaza as a form of political blackmail – a war crime.

Among other political goals, Israel is holding two million people hostage in an effort to get information on several Israelis held in Gaza, including the bodies of two of its soldiers killed during its 2014 invasion.

“As long as there’s no progress regarding the [Israeli] captives and missing persons, we can’t move forward with all sorts of initiatives for [helping] the Strip,” Lieberman said. “As far as its rehabilitation, it can only be on one condition – demilitarization [of Gaza].”

Gisha has also documented how Israel tightened its closure of Gaza in 2017, including a host of new restrictions “introduced with little to no justification provided as to their purpose and, it appears, no consideration of the impact they would have on the lives of Gaza’s residents.”

Cover photo: Doctors at Gaza’s al-Nasr children’s hospital say patients’ lives are at risk as hospitals in Gaza shut down due to a shortage of fuel for generators. (via Facebook)