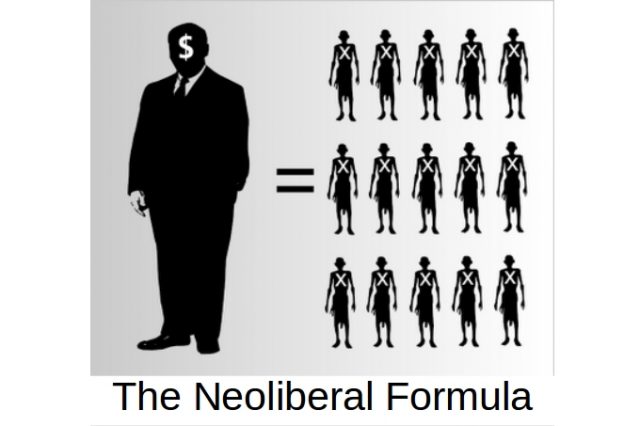 When the long expansive cycle of the capitalist economy after the second world war finally was wearing out, a situation arose that economists have called “stagflation”, the combination of stagnation with inflation. State spending accumulated during the era of great economic development and social conquests began to weigh on governments, who resorted to inflation to deal with it.

It was in this framework that elements that later would give rise to neoliberal ideology began to appear. A sort of early neoliberalism was contained in the proposals of the Trilateral Commission, composed by Samuel Huntington, Michael Crozier and Joji Watanuki (The Crisis of Democracy, New York, New York University Press, 1975), when they proposed a “restricted democracy”. The State had become incapable of meeting the demands of distinct sectors of society, which, in a context democracy, would overload public finances, so the attention to rights that could no longer be satisfied. The theme of “ungovernability” arose, which became the essential piece at the centre of budgetary adjustments in the neoliberal model.

In Latin America, coinciding with the transitions from dictatorships to democracy, Fernando Henrique Cardoso (Autoritarismo e democratização. Rio de Janeiro, Editora Paz e Terra, 1975) proposed an early version of neoliberalism, in his Theory of Authoritarianism, which has oriented to a large extent these transition processes. In his vision, democratization would mean decentralizing political power around the executive and de-concentrating economic power around the State. In the dictatorships, in his opinion, the hegemonic sector was a kind of “bourgeoisie of the State”, which would have to be displaced to give way for democracy. There are clear elements pointing to a minimal state that was to become a key element of the neoliberal model.

Over the following decades, Latin America became the region of the world with the most neoliberal governments and in its most radical forms. The common features of these governments are well-known, as are the personalities that have led them as presidents, elected, re-elected and subsequently despised.

As a heritage of the wearing down of the neoliberal model, those who followed it were systematically defeated in some of the most important countries of the continent: Venezuela, Brazil, Argentina, Uruguay, Bolivia, Ecuador. Then recently, as the result of a new conservative offensive, exploiting weaknesses of some of these governments, a wave of conservative restoration is expanding, with its axis in Argentina and Brazil.

They impose the same model of decades ago, as if nothing had happened in our countries and in the world. As if this model were not exhausted, as if there were not installed in the very centre of capitalism a deep and prolonged recessive crisis. This is late neoliberalism.

Flacso Argentina and the Centro Cultural de la Cooperación are undertaking (in late November), in Buenos Aires, the most important and complete event on “The State and Public Policies –- Late Neoliberalism”. A broad range of thematic axes, from Control and Public Ethics to Gender Policies, also including policies of education, health, culture among others, make up the agenda of the II National Congress.

To decipher late neoliberalism, with its anachronisms and novelties, is the indispensable condition for updating the struggle against this model, that is devastating social rights, national sovereignty and democracy itself.

– Emir Sader, Brazilian Sociologist and Political Scientist, is the Coordinator of the Laboratory of Public Policy of the State University of Rio de Janeiro (UERJ).

(Translated for ALAI by Jordan Bishop)

Communes and Workers’ Control in Venezuela – interview with Dario Azzellini