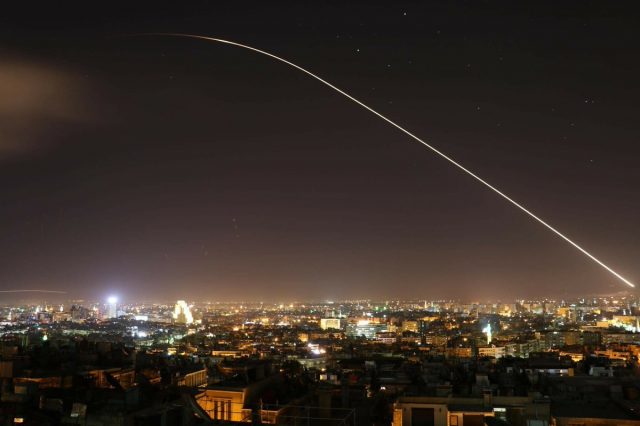 1. The United States, the UK and France launched air strikes on Syria this morning just as inspectors from the UN chemical weapons agency, the OPCW, had arrived to investigate whether a chemical weapons attack – the official justfication for the strikes – had taken place in Douma last week and, if so, who was responsible.

It looks suspiciously like the strikes were timed to pre-empt, and foil, the UN investigation. That has to raise concerns that we are being hoodwinked by our leaders, as we were in Iraq and Libya, as they seek to actively stoke yet another “humanitarian war” whose only beneficiaries will be the west’s military-industrial-security-media elites.

2. Let us not forget, a military attack on a sovereign country without authorisation from the UN Security Council amounts to a war of aggression. That is a crime against humanity – the supreme international crime, in fact – as jurists have repeatedly pointed out.

We have now so inverted the global order that western powers can claim – with a straight face – to attack a country in the name of decency and humanitarianism by breaking the most fundamental tenets of international law, tenets that were developed precisely to prevent last century’s two world wars that laid waste to Europe and beyond.

3. Trump has said: “We are prepared to sustain this response until the Syrian regime stops its use of prohibited chemical agents.” Given that he doesn’t know whether Bashar Assad used chemical weapons, or whether Assad’s jihadist opponents in Douma have access to such agents, his statements can only give Islamic extremists of the headchopping variety a huge incentive to carry out (more?) false-flag attacks – or simply mock up phoney attacks – to intensify western violence that will work in their favour.

4. There is precisely nothing humanitarian about western military attacks. They encourage and strengthen the losing side, Islamic extremists, and further drag out an already protracted proxy war in which Syrian civilians have been paying the main price.

They also risk triggering an escalation and a widening of the fighting that could lead to massive death and destruction in the region and beyond (and that without contemplating the dangers of a nuclear confrontation). We are now dependent not on the good sense of our leaders (they have shown they have none), but on the restraint of Russian leader Vladimir Putin. We must hope he refuses to be baited by our own irresponsible governments.

5. This is not Trump’s fault, bad as he is. There is bipartisan support for this madness. Hilary Clinton and the Democratic leadership in the US, and much of the parliamentary Labour party in the UK, are fully on board with these actions. In fact, they have been goading Trump into launching attacks.

It is hard not to notice a political context in both the US and the UK in which those opposed to escalating tensions with Russia – including Trump when he was a presidential candidate – have been vilified as Kremlin agents and Putin-bots.

Doubtless Trump’s shady global business dealings are worthy of investigation, as they were before he became president. But it is the relentless focus on his ties to Russia alone, on Russia’s supposed interference in the last US elections, on Russia’s supposed role in generating so-called “fake news” on social media, on the assumption of Russian involvement in the poisoning of the Skripals in the UK, and much else, that provides Trump with little choice but to go along with the US security and intelligence elites.

That is the reason why he is instantly feted by the policy establishment every time he attacks Syria. It will take a brave Trump to resist these pressures in the future – and little so far suggests that he possesses that kind of courage.