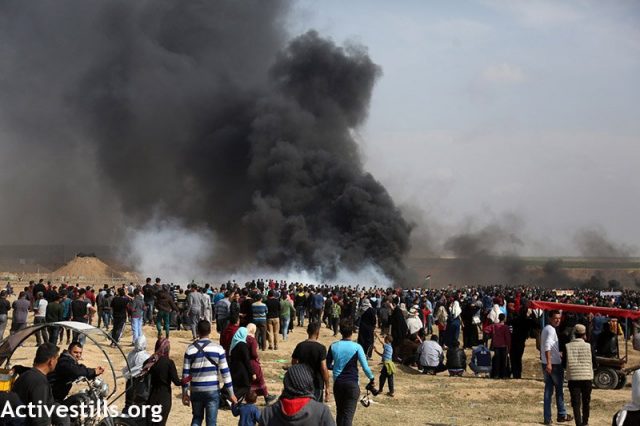 Regarding the first incident, the army claimed that two “suspects attempted to infiltrate Israel from the southern Gaza Strip and damage the security fence.” The army fired towards them in response, killing one, and injuring the other, who was detained “and transferred to security forces for further questioning.”

The Israeli military said that the two others were killed after they “infiltrated into Israel [and] hurled explosive devices at IDF soldiers.”

One of those killed Sunday evening was identified by Palestinian media outlets as 16-year-old Yusif Abu Jazar, killed of east of Rafah. He is the fifth child reported killed in Gaza during Israel’s lethal crackdown on Great March of Return protests that began on 30 March.

Another Palestinian was arrested by Israel on Sunday after attempting to cross the fence separating Israel and the Gaza Strip. An Israeli army spokesperson called the arrested man “a Hamas terrorist” and accused him of trying to “sabotage the fence and other security equipment.”

Palestinians frequently attempt to leave the tightly besieged Gaza Strip in search of work in Israel by breaching the boundary fence, due to the dire economic circumstances in Gaza. Israeli forces are typically able to detain them without using lethal force.

Israel meanwhile continues to spin the protests launched on 30 March as “Hamas riots,” accusing the political and resistance group of “attempting to disguise terror activities as a civilian-led riot.”

The military told the court that “these are incidents that are part of the armed conflict between the Hamas terrorist organization and Israel, with all that this implies.”

Adalah, one of the groups challenging the open fire regulations, rebutted the military’s claim.

“All the eyewitness testimony and video documentation from the past several weeks clearly reveals the Israeli military has been using live fire in Gaza, resulting in the killings of dozens of unarmed protesters taking part in civilian demonstrations,” the rights group stated. “At no point did the protesters endanger the lives of others.”

Jamil Dakwar, director of the ACLU’s human rights program, pointed out that the state’s own response to the high court petition argues that “Contrary to what is claimed in the petitions, open-fire directives do not permit use of live ammunition towards a person only due to their presence in the buffer zone or near the security barrier.”

The state also argues that “the directives do not permit firing of live ammunition at an individual just because they participate in a violent disorder or support Hamas.”

The military’s open-fire regulations are classified and the army has said it would only show them to the judges in a closed session, making it impossible for human rights defenders or the public to assess the claims made in court.

Fifty Palestinians have been killed in Gaza’s eastern perimeter since 30 March. Five of those killed were children and two were journalists. The vast majority were participating in protests when they were fatally injured by Israeli sharpshooters.

No Israelis have been killed or injured as a result of the Great March of Return protests.

A senior military officer who was present at the Gaza-Israel boundary on Friday, when soldiers fatally wounded four protesters, including a child, told the Israeli newspaper Haaretz that snipers are restricted to shooting at the legs of people approaching the fence.

He claimed that most of the Great March of Return fatalities “resulted from snipers aiming at demonstrators’ legs, with the killings an unintentional outcome after a protester bent down, a sniper missed, a bullet ricocheted or a similar phenomenon,” Haaretz reported.

After the Israeli military fatally wounded 18 protesters on 30 March, the first day of the protests, it tweeted and then deleted an admission of responsibility for the deaths and injuries.

“Nothing was carried out uncontrolled; everything was accurate and measured, and we know where every bullet landed,” the tweet from the Israeli military spokesperson stated.

The shootings of several Palestinians killed during Great March of Return protests have been captured on video.

This video shows Abdallah al-Shamali, 20, standing amid a group of men and children when he is shot in the chest without warning on 20 April:

#GAZA: footage shows the moment Abdullah Shamali was shot in the head from distance of #700 meters away from the border fence! pic.twitter.com/tU4YAyJ1zj

Al-Shamali posed no conceivable threat to any Israeli soldier, positioned hundreds of meters away, when he was fatally wounded.

The fatal injury of journalist Ahmad Abu Hussein, who was wearing protective gear identifying him as a member of the press when he was shot on 13 April, was likewise documented on video.

A video shows Tahrir Mahmoud Said Wahbeh, 18, being shot in the head as his back was turned turned to the soldiers positioned behind the Gaza boundary fence on 23 April.

Video shows that Muhammad Ayyoub, 14, posed no conceivable danger to heavily armed Israeli occupation forces when he was killed on 20 April.

Another video shows Abd al-Fattah Abd al-Nabi, 19, being shot in the head as he ran away from the boundary fence on 30 March.

This video shows the killing by artillery fire of farmers Sari Walid Abu Odeh and Hamdan Ismail Abu Amsha, who were targeted when they were trying to rescue Palestinians injured near the Gaza boundary fence in northern Gaza on 30 March:

A witness told the human rights group Al-Haq that the Israeli army fired on two young men who were trying to cut the fence and cross the boundary. One of the injured men was evacuated on a motorcycle and Hamdan attempted to come to the aid of the other.

Soldiers fired at Hamdan as he was carrying the injured man. Hamdan fell to the ground and the man he was attempting to rescue managed to crawl away.

Sari approached Hamdan amid sporadic firing from Israeli soldiers, and was able to pick him up and carry him for a few meters before he too was shot in the leg and fell to the ground.

“Sari and Hamdan were on the ground bleeding for about an hour,” witness Ahmad Khaled Abu Odeh, Sari’s cousin, told Al-Haq. “I saw them stand up and walk together for a few meters. Sari was pulling Hamdan, when soldiers shot him again and he fell to the ground.”

Then the military began shelling the men.

“My uncle called Sari, who told him Hamdan was killed by the shell’s shrapnel,” Ahmad Abu Odeh said. “A minute later, I heard a second and third shell. We then lost connection with Sari completely. An hour later, an ambulance came and evacuated Sari and Hamdan’s bodies.”

Israeli soldiers operate under an apparent shoot-to-kill policy in Gaza’s boundary areas. The exact range of the zone is undeclared but is generally understood to be within 300 meters of the Gaza-Israel boundary.

Israeli forces killed 19 Palestinians inside the Gaza boundary between the beginning of 2017 and 3 March 2018, according to the Israeli rights group B’Tselem.