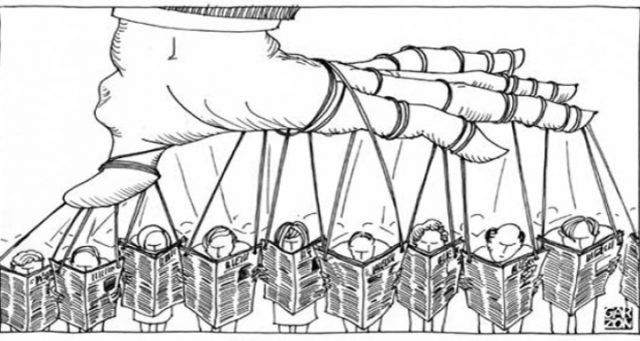 Mobilizing a population to vilify and hate a targeted enemy is a tactic that leaders have used since before the dawn of human history, and it is being used to demonize Russia and Vladimir Putin in the current conflict. If we want to join the march to war, we can join the hate fest. But if we want a more objective and honest assessment of events, we must rely upon facts that our government and its cheer-leading mainstream media are not anxious for us to view.

In the wake of Russia’s invasion of Ukraine, all things Russian are being punished. Russian athletes, including paraplegics, are barred from international sports competition. Century old Russian writers and musicians such as Tolstoy and Tchaikovsky are being removed from book shelves and concerts. Even Russian bred cats are not exempt.

If such actions are justified, why was there no such banning of US athletes, musicians or writers after the US invasion of Iraq? Moreover, why are so few people outraged by the bombing and killing of 370,000 Yemeni people? Why are so few people outraged as thousands of Afghans starve because the United States is seizing Afghanistan’s national assets which were in western banks?

There has been massive and widespread publicity about Ukraine. It is a simple Hollywood script: Ukraine is the angel, Russia is the devil, Zelensky is the hero and all good people will wear blue and yellow ribbons.

Maintaining this image requires propaganda to promote it, and censorship to prevent challengers debunking it.

This has required trashing some long held western traditions. By banning all Russian athletes from international competition, the International Olympic Committee and different athletic federations have violated the Olympic Charter which prohibits discrimination on the basis of nationality.

The West prides itself on free speech yet censorship of alternative viewpoints is now widespread in Europe and North America. Russia Today and other Russian media outlets are being blocked on the internet as well as cable TV. Ironically, numerous programs on RT were hosted by Americans, for example journalist Chris Hedges and comedian Lee Camp. The US is silencing their own citizens.

Censorship or shadow banning is widespread on social media. On April 6, one of the best informed military analysts, Scott Ritter @realScottRitter, was suspended from Twitter. Why? Because he suggested that the victims of Bucha may have been murdered not by Russians, but rather by Ukrainian ultra-nationalists and the US and UK may also be culpable.

The 2015 Netflix documentary titled “Winter on Fire: Ukraine’s Fight for Freedom” deals with the Maidan (Kiev central square) uprising of 2013-2014. It ignores the most essential elements of the events: the management provided by the US and the muscle provided by ultra-nationalists of the Right Sector and Azov Battalion. The attacks and killing of Ukrainian police are whitewashed away.
By contrast, the 2016 documentary “Ukraine on Fire” provides the background and essential elements of the conflict. It is not available on Netflix and was banned from distribution on YouTube for some time.

Most people in the West are unaware of the US involvement in the 2014 Kiev coup, subsequent US funding and training of ultra-nationalist and Neo Nazi battalions, and the eight year war in eastern Ukraine resulting in fourteen thousand deaths.

Backed by US and UK intelligence agencies, Ukraine knows the importance of the information war. They make sensational accusations that receive uncritical media coverage. When the truth eventually comes out, it is ignored or buried on the back pages. Here are a few examples:

– In 2014, eleven civilians were killed in eastern Ukraine when an apartment was hit in rebel held territory. Ukraine tried to blame Russia even though no bombs were coming from Russia and the population is ethnically Russian.

– At the beginning of the current conflict, Ukrainian President Zelensky claimed that soldiers on Snake Island died heroically rather than surrender. Actually, all the soldiers surrendered.
– Ukraine and western media claim a maternity hospital in Mariupol was bombed by Russia. Evidence shows the hospital was taken over by Ukrainian military forces on March 7, two days before the bombing on March 9.

– The latest sensational accusations are regarding dead civilians in Bucha, north of Kiev. Again, there is much contrary evidence. The Russian soldiers left Bucha on March 31, the mayor of Bucha announced the town liberated with no mention of atrocities on March 31, the Azov battalion entered Bucha on April 1, the Ukrainian Defense Ministry published video of “Russian” atrocities on April 3.
In most cases, western media does not probe the accusations or use simple logic to ask if they make sense. However in the case of Bucha story, the NY Times had to acknowledge they were “unable to independently verify the assertions by Ukraine’s Defense Ministry.”

In addition to actual censorship, there is widespread self-censorship. Instead of reading what the Russians are saying, western political “analysts” engage in outlandish amateur psychology and speculation. With no factual basis, they speculate about what Putin wants and his mental state.

This is convenient if one does not want to deal with the real issues and arguments.

Most western analysts and journalists are afraid or unwilling to read or listen to what the Russian leaders say. That is unfortunate because those speeches are more clear and direct than those from western politicians who rely on public relations, spin and platitudes.

Ignorance of Russian foreign policy is such that Truthout online magazine recently published an article which contains a sensational but completely invented quote from Putin. It says,

Putin here is clear enough: “Ukraine has no national rights that Russians are bound to respect. Prepare for reunification, reabsorption, or some other euphemism for subaltern status with Mother Russia.”
Putin said no such thing and any moderately knowledgeable person would recognize this to be fake.

When I emailed the co-author, Carl Davidson, asking where the quotation came from, he admitted inventing it. This is significant because the statement goes to the core of what the conflict is about. Is Russia trying to absorb all of Ukraine? Do they intend to occupy Ukraine? Anyone who reads the speeches of Putin and Lavrov, such as here and here and here, knows they do not. Davidson’s fabricated quote suggests he has not read the speeches himself.

Ukraine in the Global Context

The article with the made-up quote contends that “Putin is part of a global right-wing authoritarian movements that seeks to ‘overthrow’ the 20th Century.” This analysis is close to that of the US Democratic Party, which sees the major global division being between “authoritarianism” vs “democracy”.

It is highly US centered and partisan, with Putin somehow lumped with Trump. It is also self-serving, with US Democrats as the embodiment of “democracy”. It is completely contrary to a class analysis.
This faulty analysis has major contradictions. It is well known that Biden is unpopular. Biden’s latest approval rating is under 42%. It is less well known in the West that Putin is popular in Russia. Since the intervention in Ukraine his approval rating has increased to over 80%.

Also largely unknown in the West, most of the world does NOT support the Western analysis of the Ukraine conflict. Countries representing 59% of the global population abstained or voted against the condemnation of Russia at the UN General Assembly. These countries tend to see US exceptionalism and economic-military domination as a key problem. They do not think it helpful to demonize Russia and they urge negotiations and quick resolution to the Ukraine war.

Cuba said, “History will hold the United States accountable for the consequences of an increasingly offensive military doctrine beyond NATO’s borders which threatens international peace, security and stability…. Russia has the right to defend itself.”

South African President Ramaphosa blamed NATO saying, “The war could have been avoided if NATO had heeded warnings from amongst its own leaders and officials over the years that its eastward expansion would lead to greater, not less, instability in the region.”

The Chinese representative said, “The final settlement of the Ukraine crisis requires abandoning the Cold War mentality, abandoning the logic of ensuring one’s own security at the expense of others’ security, and abandoning the approach of seeking regional security by expanding military blocs.”

Many western anti-war movements are critical of Russia’s invasion. Others, such as the US Peace Council, see the US and NATO as largely responsible. However they all see the necessity of pressing to stop the war before it gets worse.

In contrast, the western military-industrial-media complex is fueling the war with propaganda, censorship, banning, demonization and more weapons. It appears they do not want a resolution to the conflict. Just as they supported NATO pushing up against Russia, knowing that it risked provoking Russia to the point of retaliation, they seem to be pushing for a protracted bloody conflict in Ukraine, knowing that it risks global conflagration. Yet they persist, while crying crocodile tears.

Rick Sterling is an independent journalist based in the SF Bay Area. He can be reached at rsterling1@protonmail.com