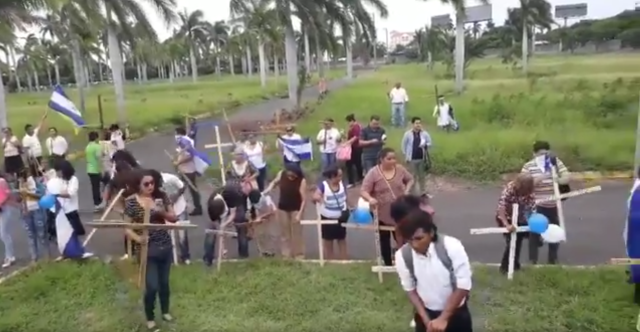 “Cathedral protests highlight Ortega’s broken Alliance with Nicaragua’s church” an article in today’s Guardian by Toby Stirling has no true facts – this has become typical of The Guardian’s reporting on Nicaragua.

Even the pictures used are full of lies. The opposition put a number of crosses around the Managua Cathedral a few weeks ago supposedly representing people killed by the government. The names on the crosses in the picture are not opposition victims and moreover were not killed by the government: For example, Darwin Alexander Salcedo Vílchez was a Sandinista supporter who was killed in Esteli, when a caravan full of sandinistas heading to a pro-government march in Managua was attacked by an opposition group.

Gregorio Orozco was killed in the countryside in a murder unrelated to the political unrest; a report done by Nicaraguan researcher, Enrique Hendrix, shows how Sandinista deaths and others unrelated to the protests like Orozco’s are used to inflate the so-called Human Rights Organizations lists of government victims.

In the last few weeks scores of Sandinista family members have gone to the Managua cathedral to remove crosses of loved ones that the opposition was using to try to shore up the numbers of dead that have been at the heart of their anti-government campaign.

Any remaining crosses have since been removed by the church itself because the priests at the Cathedral have had to tone down their political activity and ask the opposition parishioners to do the same.

Managua’s Auxiliary Bishop, Silvio Baez, a known leader of the opposition, was caught on tape at a meeting proudly boasting about the church’s role in the creation of the opposition Civic Alliance.

He also talked about the possibility of bringing back the roadblocks – the places where Sandinistas were kidnapped, raped, tortured, and killed – and not just a few – over a hundred people were seriously tortured, some of them killed.  Bishop Baez was also taped saying how much he would like to see President Ortega put in front of a firing squad. The Guardian tries to make the hierarchy out to be heroes when there are multiple videos showing priests participating and directing torture of Sandinistas.

The audios of Bishop Baez, the veracity of which was confirmed by Cardenal Brenes, were made public the last week of October; since then thousands of people have demanded Baez be removed. The members of the Christian Base Community, Saint John Paul the Apostle in the September 14 neighborhood of Managua wrote a petition to the Vatican requesting that Bishop Baez be sent to a post outside Nicaragua and to date there are 491,576 signatures, including people’s identity card numbers.

The 44 boxes of petitions were received by the Papal Nuncio who said he will get them to Rome. In Nicaragua today about 45 % of people are Catholic, so if you consider those 15 and older there might be 2 million Catholics. A fourth have signed the petition to remove the bishop.

According to The Guardian protesting has been outlawed. This is a complete fabrication by the Nicaraguan opposition. What’s more, not a single person has been arrested in Nicaragua for protesting. In Nicaragua the laws are similar to those in most US and European cities: you have to get a permit. That’s it. The Nicaraguan authorities had not been enforcing this law previously, presumably to avoid controversy. The fact is they haven’t had a protest since this change because none of the opposition leaders are willing to put their name on the permit request because if there is violence – which is usually the case – they will be held accountable.

The author also doubled his prisoner count to 550 when in reality the number of people who have been in prison related to violence since April 18 is half that. Most were arrested beginning mid-July and these are people accused or already sentenced for murder, torture, rape, arson and robbery.  Not exactly political prisoners. And hundreds of people captured who were involved in coup violence but on a more minor scale have been released.

Nicaragua has been the victim of an attempted coup by the oligarchs, the Catholic church, US financed NGOs and the US and major media like The Guardian have helped them.