Europe in irreversible decay, UE elections are proof of it ! 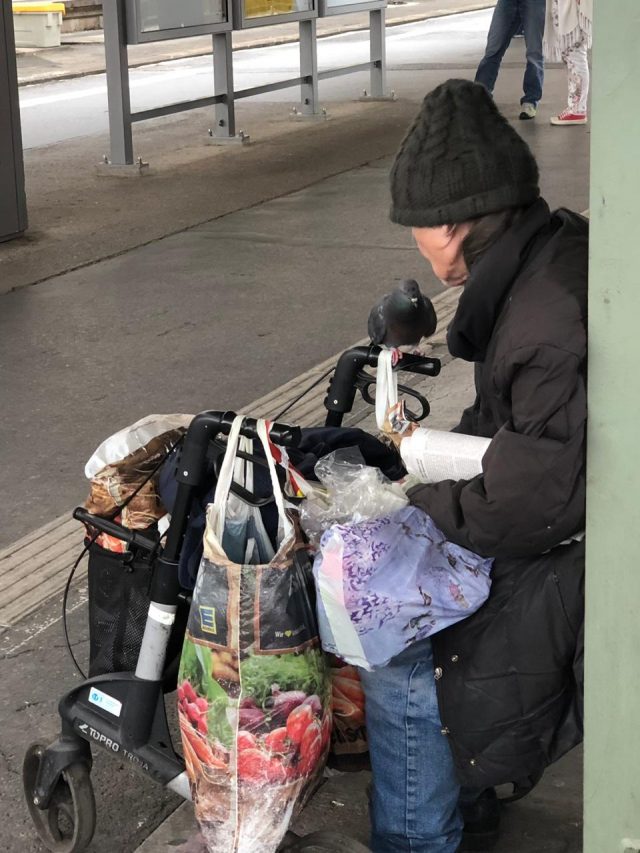 Europe, an “old” colonialist continent, is decaying, and in some places even collapsing. It senses how bad things are going. But it never thinks that it is its own fault.

North America is decaying as well, but there, people are not even used to comparing. They only “feel that things are not going well”. If everything else fails, they simply try to get some second or third job, and just survive, somehow.

On both sides of the Atlantic, the establishment is in panic. Their world is in crises, and the ‘crises’ arrived mainly because several great countries, including China, Russia, Iran, but also South Africa, Turkey, Venezuela, DPRK and the Philippines, are openly refusing to play in accordance with the script drawn in Washington, London and Paris. In these nations, there is suddenly no appetite for sacrificing their own people on the altar of well-being of Western citizens. Several countries, including Venezuela and Syria, are even willing to fight for their independence.

Despite insane and sadistic embargos and sanctions imposed on them by the West; China, Russia and Iran are now flourishing, in many fields doing much better than Europe and North America.

If they are really pushed any further, China, Russia and their allies combined, could easily collapse the economy of the United States; an economy which is built on clay and unserviceable debt. It is also becoming clear that militarily, the Pentagon could never defeat Beijing, Moscow, even Teheran.

After terrorizing the world for ages, the West is now almost finished: morally, economically, socially, and even militarily. It still plunders, but it has no plan to improve the state of the world. It cannot even think in such terms.

It hates China, and every other country that does have progressive, internationalist plans. It smears President Xi Jinping and his brainchild, the Belt and Road Initiative (BRI), but there is nothing new and exciting that the West is able to offer to the world. Yes, of course, those regime changes, coups, military interventions and theft of natural resources, but anything else? No, silence! 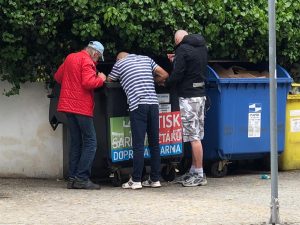 In Pilsen, Czechia, people raiding garbage in order to eat

During my two weeks long working visit to Europe, in the Czech Republic (now renamed to Czechia), a country that enjoys a higher HDI (Human Development Index defined by UNDP) than Italy or Spain, I saw several young, decently dressed men, picking through garbage bins, right in front of my hotel, looking for food.

I saw young Europeans kneeling and begging in Stuttgart, the second richest city in Germany (where both Mercedes and Porsche car are produced).

What I observed in all seven countries of the EU that I visited, was confusion, but also indifference, extreme selfishness and almost grotesque idleness. In great contrast to Asia, everybody in Europe was obsessed with their ‘rights’ and privileges, while no one gave a slightest damn about responsibilities.

When my plane from Copenhagen landed in Stuttgart, it began to rain. It was not heavy rain; just rain. The Canadair jet operated by SAS is a small aircraft, and it did not get a gate. It parked a few meters from the terminal and the captain announced that ground staff refused to bring a bus, due to lightning and the downpour. And so, we stayed inside the plane, for 10 minutes, 20 minutes, half an hour. The lightning ended. The drizzle continued. 40 minutes, no bus. One hour later, a bus appeared. A man from the ground staff emerged leisurely, totally wrapped in plastic, protected hermetically from rain. Passengers, on the other hand, were not even offered umbrellas.

“I love myself”, I later read graffiti in the center of the city. 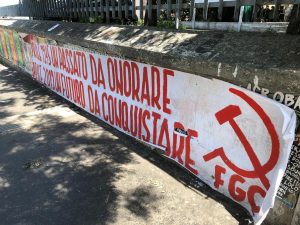 At Sapienza University in Rome

The graffiti was not far from the central train station, which is being refurbished at the cost of several billion euros, and against the will of the citizens. The monstrous project is marching on at an insanely lazy pace, with only 5-6 construction workers detectable at a time, down in the tremendous excavations.

Stuttgart is unbelievably filthy. Escalators often do not work, drunkards are all over, and so are beggars. It is as if for decades, no one did any face-lift to the city. Once free museums are charging hefty entrance fees, and most of the public benches have disappeared from parks and avenues.

The decay is omnipresent. The German rail system (DB) has virtually collapsed. Almost all trains are late, from the ‘regional’; to the once glorified ICE (these German ‘bullet trains’ are actually moving slower, on average, even in comparison to some Indonesian inter-city expresses). 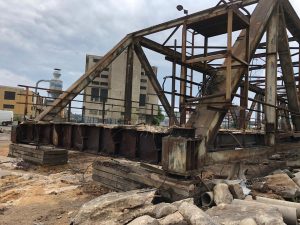 This used to be proud Communist factory Skoda in Pilsen

The services provided everywhere in Europe, from Finland to Italy, are grotesquely bad. Convenience stores, cafes, hotels – all are understaffed, badly run and mostly arrogant. Humans are often replaced by dysfunctional machines. Tension is everywhere, the bad mood omnipresent. Demanding anything is unthinkable; one risks being snapped at, insulted, sent to hell.

I still remember how Western propaganda used to glorify services in the capitalist countries, when we were growing up in the Communist East: “The customer is always treated like a god”. Yes, right! How laughable.

For centuries, “European workers” were ‘subsidized’ by colonialist and neo-colonialist plunder, perpetrated in all non-white corners of the world. They ended up being spoiled, showered with benefits, and unproductive. That was fine for the elites: as long as the masses kept voting for the imperialist regime of the West.

I saw a lot this time, and soon I will write much more about it.

What I did not witness, was hope, or enthusiasm. There was no optimism. No healthy and productive exchange of ideas, or profound debate; something I am so used to in China, Russia or Venezuela, just confusion, apathy and decay everywhere.

And hate for those countries that are better, more human, more advanced, and full of socialist enthusiasm. 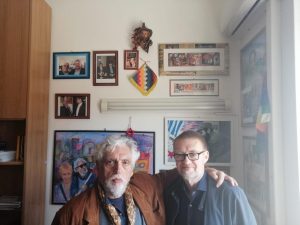 Italy felt slightly different. Again, I met great left-wing thinkers there; philosophers, professors, filmmakers, journalists. I spoke at Sapienza University, the biggest university in Europe. I lectured about Venezuela and Western imperialism. I worked with the Venezuelan embassy in Rome. All of that was fantastic and enlightening, but was this really Italy?

A day after I left Rome for Beirut, Italians went to the polls. And they withdrew their supports from my friends of the 5-Star-Movement, leaving them with just over 17%, while doubling the backing for the extreme right-wing Northern League.

Who pays for it, no one in Europe seems to care. Not once did I hear any European politicians lamenting about the plundering of West Papua or Borneo, about Amazonia or the Middle East, let alone Africa.

And immigration? Did we hear anything about that nuisance of European refugees, millions of them, many illegal, that have descended in the last decades on Southeast Asia, East Africa, Latin America, and even Sub Continent? They are escaping, in hordes, from meaninglessness, depressions, existential emptiness. In the process, they are stripping the locals of land, real estate, beaches, everything.

“Immigrants out”? Fine; then European immigrants out from the rest of the world, too! Enough of the one-sidedness!

The recent EU elections clearly showed that Europe has not evolved. For countless dark centuries, it used to live only for its pleasure, murdering millions in order to support its high life.

Right now, it is trying to reshuffle its political and administrative system, so it can continue doing the same. More efficiently!

On top of it, absurdly, the world is expected to pity that overpaid and badly performing, mainly right-wing and lethargic European proletariat, and sacrifice further tens of millions of people, just in order to further increase its standard of living.

All this should not be allowed to happen. Never again! It has to be stopped.

What Europe has achieved so far, at the expense of billions of lives of “the others”, is definitely not worthy of dying for.

Beware of Europe and its people! Study its history. Study imperialism, colonialism and the genocides it has been spreading all over the world.

Let them vote in their fascists. But keep them away. Prevent them from spreading their poison all over the world.

They want to put the interests of their countries first? Wonderful! Let us do exactly the same: The people of Russia first, too! China first! And, Asia, Africa, Latin America first!

Andre Vltchek is a philosopher, novelist, filmmaker and investigative journalist. He has covered wars and conflicts in dozens of countries. Four of his latest books are China and Ecological Civilization with John B. Cobb, Jr., Revolutionary Optimism, Western Nihilism, a revolutionary novel “Aurora” and a bestselling work of political non-fiction: “Exposing Lies Of The Empire”. View his other books here. Watch Rwanda Gambit, his groundbreaking documentary about Rwanda and DRCongo and his film/dialogue with Noam Chomsky “On Western Terrorism”. Vltchek presently resides in East Asia and the Middle East, and continues to work around the world. He can be reached through his website and his Twitter. His Patreon