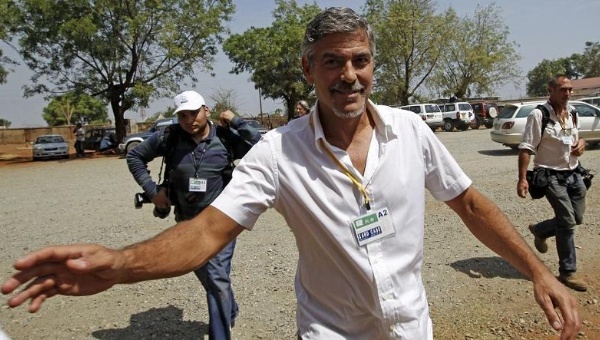 The “Enough Project” claims it’s mission is to prevent genocide in Africa, but has been conspicuously silent when it comes to the genocidal famine in Somalia.

EP, as it is known, was founded by senior U.S. Intel “spook” Gayle Smith, former Senior Director of the National Security Council under President Obama and now head of the USAID/CIA.

Todaym EP is headed by Ms. Smith’s protégé John Prendergast whose history as head of EP is one of subterfuge and lies in service to Pax Americana.

EP claims it’s mission is to prevent genocide in Africa, as in the name “Enough Project”, yet has been conspicuously silent when it comes to the genocidal famine in Somalia during the Great Horn of Africa Drought in 2011-12 where 250,000 Somali children starved to death.

Recently George Clooney was enjoying 15 minutes of fame as a humanitarian claiming to have exposed massive corruption in South Sudan when he should have been warning the world of the U.N.’s next genocide in Somalia as in 300,000 starving children. Soon the genocide in Somalia will hit its peak with hundreds, up to 1,000 children a day dying from hunger with only a deafening silence emanating from the CIA’s Enough Project.

EP, with support from its big brother the Center for American Progress, only once in its history raised a real genocide, that back in 2007-8 when Gayle Smith was out to political pasture, she being a rabid democrat during the Bush Jr. years in office. Then she was part of the Democrat “opposition” to the Bush regime and oh so briefly raised the food and medical aid blockade in the Ogaden in Ethiopia, where the only instance of both the Red Cross and Doctors Without Borders being expelled from a famine stricken region has been allowed.

Once Ms. Smith jumped on the Obama For President bandwagon, no further mention of the genocide in the Ogaden was heard.

RELATED: The UN’s Next Genocide in Somalia

Todaym EP is proving its loyalty to Pax Americana by playing huckster for regime change in South Sudan, as in denying China access to African oil via the invasion of “peacekeepers” in the name of Responsibility To Protect of Libyan infamy. The USA has abandoned former “rebel leader” Riek Machar in favor of direct military intervention by the U.N. and the USA’s gendarme in Africa, the African Union.

The Chinese have started to expand their oil production so expect to hear louder cries of outrage from the likes of EP about various crimes and even “genocide” in South Sudan followed by demands for more foreign military intervention in the country.

With all their lies and subterfuge, don’t you think that we here in Africa have had enough of the CIA’s Enough Project?

Thomas C. Mountain is an independent journalist in Eritrea living and reporting from here since 2006. His speeches, interviews and articles can be seen on Facebook at thomascmountain or he can best be reached at thomascmountain at g mail dot com