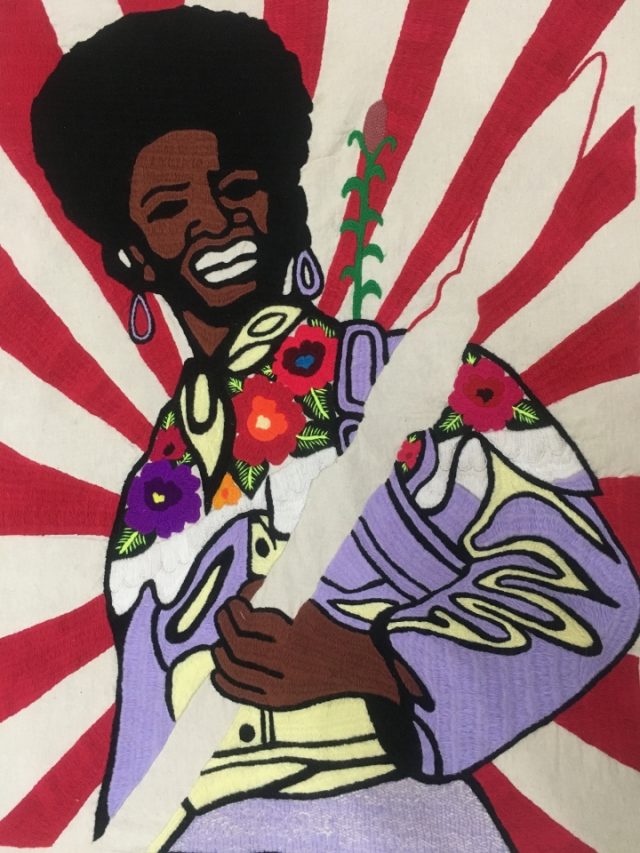 Douglas’s historical and new works, shown alongside pieces by younger artists, draw a line of influence between the two generations and establish a community of shared concerns.

At a moment when the institutional racism pervading our society is becoming increasingly explicit and violent, Emory Douglas: Bold Visual Language, curated by Essence Harden and Daniela Lieja Quintanar at Los Angeles Contemporary Exhibitions (LACE), merges the historical battlefield of civil and human rights with its present-day counterpart.

Limited to LACE’s front room, Bold Visual Language is a small but compelling exhibition that pairs archival materials on loan from the Southern California Library by legendary graphic artist Emory Douglas, made when he was the Black Panther Party’s Minister of Culture, with new works (solo and in collaboration with the Woman’s Zapatista Embroidery Collective and artist Caleb Duarte), alongside pieces by Sadie Barnette, Juan Capistrán, and Patrick Martinez. 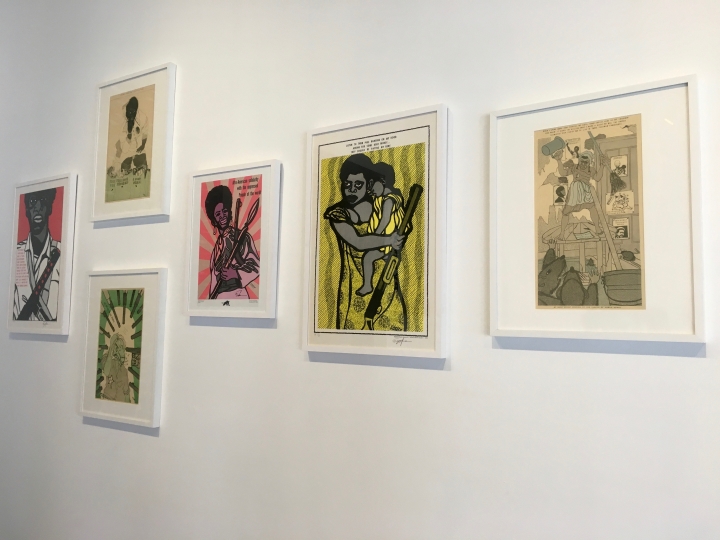 Born in 1943 in Grand Rapids, Michigan, and raised in San Francisco, Douglas studied graphic design at San Francisco City College before joining the Black Panthers in 1967. Along with serving as the party’s Minister of Culture, he was also the art director for its newspaper, whose circulation reached more than 300,000 at its peak.

Although the newspaper ceased publication in 1980, Douglas’s work has remained a touchstone for fine and graphic artists, due to the continued relevance of his themes — the fight for racial and socioeconomic equality in the United States; global revolution and justice for the disenfranchised — underscored by the rhetorical and visual strength of his illustrations. His most persuasive images draw on social realism and early modern woodcuts to create a stirring visual analogue to the BPP’s ideological platform.

Douglas’s most confrontational works may push viewers to the edge of their comfort zones. Their espousal of violence and killing is at times jarring, but they situate the work within a historical moment (most of the pieces are from the late 1960s to mid-1970s) as well as a power dynamic predicated on active resistance.

The other side of this call to resistance is that it defines empowerment as a stance or a free-flowing force to be exercised by anyone, including women — in fact, Douglas frequently seems to cast the woman of color as the diametric opposite of the white male oppressor. In a 2016 New York Times profile, he notes that his daughter’s mother and the artist Tarika Lewis, worked with him on the newspaper, and adds:

The women depicted in my artwork are a reflection of the party. Women went to jail and were in leadership roles. Women started chapters and branches of the Black Panther Party as well. […] Women were an integral part of those movements so all that played into how I expressed them in my own artwork.

Two illustrations of women struggling to care for their children and fight off slumlords (and, in one of the images, rats) lay bare the real threats to home and family faced by low-income mothers. In today’s economic climate, in which rents are spiraling out of control and state and federal officials consistently fail to step in, these images feel unsettlingly current.

Although the Black Panther Party platform emphasized black oppression by a white power structure, Douglas’s illustrations encouraged inclusiveness. An iconic image of a black woman wielding a spear and rifle reads: “Afro-American solidarity with the oppressed People of the world,” and in other works on display (many appearing in the original newspapers), Douglas champions revolution at home and abroad, in Latin America and Asia. 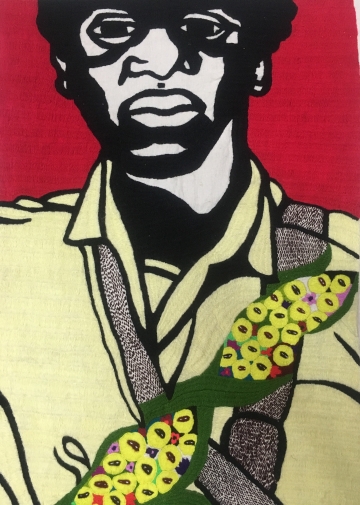 This sense of solidarity remains evident in Zapantera Negra (2012 – 16), a recent collaborative project Douglas undertook in Chiapas, Mexico, with the Woman’s Zapatista Embroidery Collective and Caleb Duarte. For these tapestries, hung in a circle from the ceiling near the center of the room, well-known Douglas images (including the above-mentioned woman with a spear) are reworked to speak to a different and expanded demographic.

The colors (vibrant even on newsprint) are celebratory, while the embroidered textiles add a level of tactility that beckons bodily, as well as intellectual and political, interaction. In the piece “Hay Que Limpiar Los Caminos Para que Entre La Paz,” a rifle in the original is replaced with a stalk of corn; in another, “Somos La Dignidad Rebelde Y En Rebeldia,” a snail (caracol) takes the place of the panther at the bottom of the original, a symbol of small, autonomous communities in Zapatista iconography. (In almost all, women receive pride of place as agents of social change.)

Douglas’s new works, shown alongside pieces by younger artists, draw a line of influence between the two generations, but, for their part, the curators seem to be establishing a community of shared concerns more than an art historical genealogy. The strategy effects a greater sense of reciprocity between the artworks, on a broader range of issues. For example, neon sign with a shard on the floor by Patrick Martinez, “Hands Up” (2018), reads “Don’t Shoot” in scattered lettering that recalls a broken glass window, while recent prints by Douglas address the victims of food shortages — most often, people of color — at home and abroad. (LACE’s location on the Hollywood Walk of Fame is fortuitous, as it brings in viewers who may otherwise never enter a museum, let alone a socially conscious art nonprofit.)

A modest yet stunning work by Juan Capistrán embodies the forcefulness of visual economy. “Study for: Coup d’etat” (2016) — whose materials are listed as “blood, sweat and tears on canvas” — portrays the heads of two pigs, wearing helmets and crying beneath the word “Amerikkka.” The spare line drawing evokes George Grosz as his most streamlined, while the pig reflects a history of biting caricature — including the paintings and illustrations of Grosz as well as works on view by Douglas — that transmutes human oppressors into grotesque animals. Yet where Grosz tends to cut the tension of an unbearable situation with humor, Douglas’s animals are expressly didactic and Capistrán’s pigs are plaintive. “Study for: Coup d’etat” is an expression of power at its most pathetic.

A partial wall is dedicated to Sadie Barnette, whose work is closest to Douglas’s, not politically or visually, but personally, as it examines her father Rodney Barnette’s legacy as founder of the Compton, California chapter of the Black Panther Party. The installation (comprised of the pieces “Untitled (People’s World)” and “Special Agents 2,” both 2018) is a microcosm of Barnette’s larger project, featured in a concurrent solo exhibition at the MCA San Diego, Dear 1968,… (on view through September 2). Here, pages from her father’s hefty FBI file, mounted on black-and-white wallpaper with the FBI insignia as a repeated motif, are photocopied and adorned with hot-pink spray paint.

Barnette’s concept rests on the juxtaposition of her father’s activism, and its resultant government surveillance, with his role in the family unit. The work is more aesthetically striking than it is complex, but it offers an intimate glimpse into the artist’s own negotiation of her father’s history. 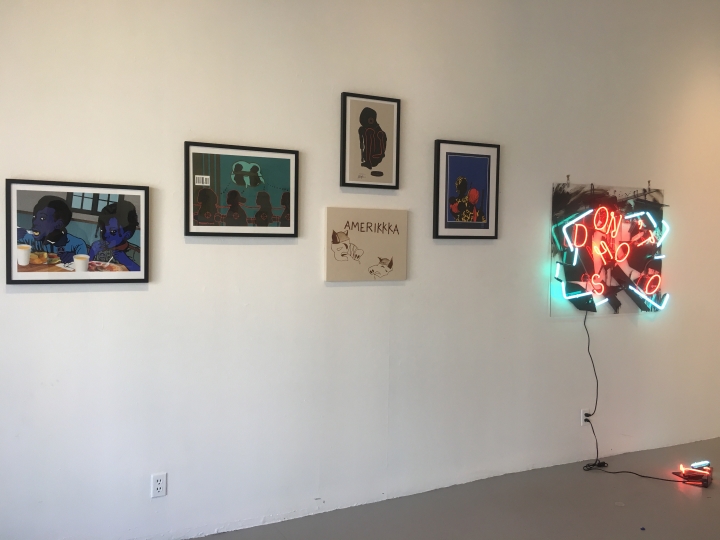 In contrast, Douglas’s images exemplify the interaction between broad political rhetoric and the particularity that makes the best social realism both memorable and meaningful to large audiences. While his work has been recognized in the years since the Black Panther Party newspaper ceased publication, Bold Visual Language is a reminder that the boldness of Douglas’s visual language remains, and has never ceased to be necessary, here and now.

A partial version of the exhibition will travel to the Southern California Library (6120 S. Vermont Ave., Los Angeles, California) following its closing at LACE.