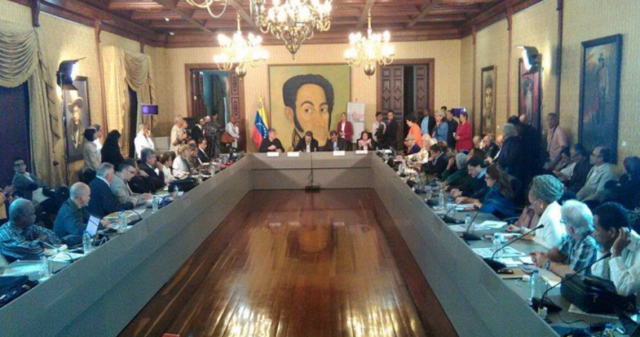 With the new technologies of information and communication, without us even realizing it, millions of citizens are being watched, spied on, controlled, and their information filed by States that are carrying out a massive clandestine surveillance. This campaign is taking place in alliance with military security apparatuses and giant corporations of the web. In a parallel and complementary way while this new era of the “post truth” (or the art of the blatant lie) is falling into place another war is happening in the fields of ideology and culture. All of this is being waged by the network of the hegemonic media against our people in the Americas.

Both of these processes are being promoted by the United States, their European accomplices and the Fascist Government of Israel, through an increasingly criminal and militarized form of capitalism. Lately, Cuba, Venezuela, Ecuador, Bolivia and other countries in the region, have been the main target of media terrorism by imposing collective imaginaries with content related to the dominant ideology. This is being done through media cybernetics, both audiovisual and graphic, to manipulate and control conscience in a massive way.

It is foreseeable that the irregular and asymmetrical wars will strengthen and deepen. As it is well known the current wars have also been waged in the media field under the form of irregular conflicts. The Pentagon gives great importance to the ideological struggle in the field of information and the role of the media as a political and strategic weapon. This has also developed into a source of exorbitant profits for the owners of corporations. Beyond what happens in reality, the battle for control of the narrative, as they call it, military counterinsurgency is essential in creating a certain perception for the consumption of global audiences.

While promoting full spectrum wars in several countries of Latin America, the Pentagon and the Central Intelligence Agency (CIA) are intensifying their open and clandestine actions against constitutional and legitimate governments. In an ongoing way the scripts for the coup d’état made in the U.S. for Venezuela exhibits successive stages of intoxication, misinformation and distortion through the mass media under monopoly control. This is combined with unilateral and extraterritorial measures of psychological coercion and seditious and violent actions articulated in the digital networks of large corporations on the web, political parties and leaders of the international right. NGO’s, foundations, religious cults, organized crime and paramilitary groups, and transnational economic groups are all being utilized. An appearance of legitimacy by regional bodies such as the Organization of American States (OAS) also plays a part in the scheme. In short, these are various levels of the media turned into weapons of psychological war.

The intensification of militarism and interventionism against the Bolivarian revolution and other countries of ALBA is coming from the directives of the Pentagon that is now operating with the largest military budget in history. This is not conventional war but one about asymmetric enemies which are not limited to the rules of international and national laws and utilizes the use of paramilitary groups, death squads and mercenary organizations operating under the facade of private security companies.

This “full spectrum of domination” covers a policy in which the military has a common objective with the economic, media and cultural spheres. Since the spectrum is geographical, spatial, social and cultural, to impose the domination, it is necessary to manufacture consent by installing certain symbols into the so-called civil society and after repeating it over and over gets turned into “common sense”. It is incorporated into the collective imagination in an uncritical manner and introduced as a unique vision of the world from the point of view of the hegemonic power. That means the formation through manipulation that legitimizes ‘public opinion’ into the model of imperial domination.

Through an intense international media siege, in the fabrication of consent, they use double standards and simplistic and false presentations of reality. They remove the root causes, the context, the memory and the history of the struggle of the Venezuelan people for justice and their national sovereignty. The key for them is manipulation of the emotions of the population through the narrative of mass media, with its myths, half-truths and outright lies.

At the same time the social construction of fear, through media terrorism for the control of the society, rests in a system of indoctrination, aimed at colonizing. This appears in an array of opinion directed against their enemy to stigmatize and set into motion a process of destabilization to plunge the society into chaos.

Based on the distortion of the parameters of journalistic ethics, through the manufacture of “breaking news”, (or turning lies into truths) the psychological destabilization carries with it a bias to foster classism and racial hatred. The campaign includes economic warfare that plays into the anger of the middle sectors of the population through hoarding and created shortages of basic needs including food and medicines, sabotage of electricity and spreading rumors of water contamination.

The populations of the ALBA countries and, in particular, those of Venezuela, Ecuador and Bolivia have been the target of constant campaigns of toxic disinformation through messages and images intended to strip them of all political and ideological reference which do not respond to the logic of the Empire. At the same time, since the triumph of the revolution in 1959, Cuba has been the target of destabilization by different communication experiments ranging from the manipulations of AP and UPI news agencies during the invasion of the Bay of Pigs, the creation of Radio and TV Martí in the era of Reagan and Bush’s father, up to the more recent horizontal communications, via Internet, illegal and a secret communication network known as ZunZuneo, entered into the parameters of unconventional cyber warfare.

As noted in the framework of the 15th Meeting of the Network In Defense of Humanity entitled “Emancipatory Communication or Colonized Homelands”, the subjugation of the sense and values that founded the culture of the people of Our America, the main objective, “from the United States is to annihilate any hope of an alternative road to the dictatorship of capital and the continuation of their usual path of destruction of life and the planet”.

That is why revolutionary processes like the Cuban, the Venezuelan, the Bolivian, and the Ecuadorian models are subject to fierce and immoral campaigns of propaganda with the support of the political corpses of the right, such as Felipe Calderon, Alvaro Uribe and Mariana Aylwin, along with their organic intellectuals Mario Vargas Llosa, Jorge G. Castañeda and Enrique Krauze. And now they are operating with the full support of the Secretary General of the OAS, Luis Almagro, who has been directed to not only discredit the progressive political models and their leaders, but also to call for the destruction of these societies and their economic base.

It is in the face of the ravages of the ultra-reactionary right and its sponsors in Washington, members of the Network In Defense of Humanity have gathered in Caracas to discuss in a free manner the need to develop new creative media, with new semantic content and new ways to transmit them. This is imperative in order to break the siege of media disinformation trying to stifle the revolutionary spirit and willingness of these countries to continue to pursue radical changes in their societies.

Our network promotes transparency of States, the protection of the personal data of citizens and stresses the key importance of digital sovereignty. We recognize the contribution of those who have revealed the secrets of the Empire and informed us all about the magnitude of global espionage.

The publication and democratization of information is crucial for the sovereignty of the peoples. That is why we support a system of protection for informants and are in favor of the liberation of Wikileaks Director Julian Assange and the end to the persecution of Edward Snowden.

We condemn the occupation of the territory of Haiti by MINUSTAH, as an imperialist offensive against our people that the corporate media is silent about. We demand that the right of self-determination for the Haitian people be respected and that appropriate processes be initiated towards reparations and justice; in particular for the crime of the introduction of cholera virus. We also support the just claim of reparations for the genocide of slavery in the Americas.

We support the people of Mexico against the proposal to greatly expand the construction of the wall on the Southern border of the United States that further criminalizes Mexican and other migrants in Our America as the scapegoat of the new Republican government.

We challenge the United States Government to declassify all information of the media wars against governments and revolutionary processes of Our America, like the one that is currently taking place against Venezuela. We demand the abolition of the Executive Order which declares Venezuela as an unusual and extraordinary threat to the security of the United States. We also reject the offensive and false accusations against the Executive Vice-President of Venezuela, Tareck El Aissami.

In short, it is all about producing a real participatory and emancipatory system of communication as an initiative which, for being fruitful, must come from a local, continental and global strategy. It will take our sum efforts, talents and creative abilities to make prevail the revolutionary reasoning of the peoples from the South against the capital media dictatorship.