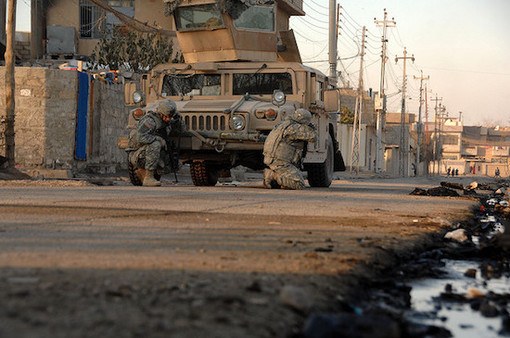 No one knows what the future will bring. Yet, many observers have been quick to announce the decline of American interventionism and the revival of isolationism–the end of an era and the beginning of another.

Rightly or wrongly, Hillary Clinton’s defeat by Donald Trump fuels this prediction, which depresses some and delights other. The conflicted responses to Trump’s victory, based on ideological interests and values, register even within families. However, the most dramatic split reactions to Trump’s victory are exemplified by the left’s reception—liberal or socialist—in the global North versus the global South. If the North reacted to Trump’s victory with suffocated apprehension, the South experienced it as a breath of fresh air, not out of sympathy for Trump but as a rejection of Clinton.

The global South associates the name of Clinton—Bill or Hillary—with the heralds of humanitarian intervention. If the discourse of humanitarianism seduced the North, it has not been so in the South, even less in the Near and Middle East, which no longer believe in it. The patent humanitarian disasters in Kosovo, Iraq, Libya, and Syria have disillusioned them.

It is in this sense that Trump’s victory is felt as a release, a hope for change, and a rupture from the policy of Clinton, Bush, and Obama. This policy, in the name of edifying nations (“nation building”), has destroyed some of the oldest nations and civilizations on earth; in the name of delivering well-being, it has delivered misery; in the name of liberal values, it has galvanized religious zeal; in the name of democracy and human rights, it has installed autocracies and Sharia law.

Who is to blame?

Did the United States not know that intervening in “the lands of Islam” would act as a catalyst for Jihad? Was it by chance that the United States intervened only in secular states, turning them into manholes of religious extremism? Is it a coincidence that these interventions were and are often supported by regimes that sponsor political Islam? Conspiracy theory, you say? No, these are historical facts.

Can the United States not learn from history, or does it just doom itself to repeat it? Does it not pose itself the question of how al-Qaeda and Daesh originated? How did they organize themselves? Who trained them? What is their mobilizing discourse? (1) Why is the US their target?  None of this seems to matter to the US: all it cares about is projecting its own idealism. (2)

The death of thousands of people in Yugoslavia, Iraq, Libya or Syria, has it contributed to the well being of these peoples? Or does the United States perhaps respond to this question in the manner of Madeleine Albright, Bill Clinton’s Secretary of State, who regretted the death of five-hundred-thousand Iraqi children, deprived of medications by the American embargo, to conclude with the infamous sentence, “[But] it was worth it?”

Have universal values become a problem rather than a solution? What then to think of making war in their name? Has humanitarian intervention become punishment rather than help?

The South has understood where the North has not: the selective nature of humanitarian interventions reflects their punitive nature; sanctions go to non-client regimes; interventions seem to be a new excuse for the hegemonic ambitions of the United States and its allies; they are a new rationale for NATO after the collapse of the Soviet Union; they are a way to suppress Russia and deprive it of its zones of influence. (3)

What a far-sighted motion was that of the coalition of the countries of the Third World (G77) at the Havana Summit in 2000!  It declared its rejection of any intervention, including humanitarian, which did not respect the sovereignty of the states concerned. (4) This was nothing other than a rejection of the Clinton Doctrine, announced in 1999, in the wake of the war of Kosovo, which made “humanitarian intervention” the new bedrock, or perhaps the new facade, of the foreign policy of the United States. It was the same policy followed and developed by Hillary Clinton during her tenure as secretary of state. (5)

The end of interventionism?

But are Clinton’s defeat and Trump’s accession to power sufficient reasons to declare the decline of interventionism?

Donald Trump is a nationalist, whose rise has been the result of a coalition of anti-interventionists within the Republican Party. They profess a foreign policy that Trump has summarized in these words: “We will use military force only in cases of vital necessity to the national security of the United States. We will put an end to attempts of imposing democracy and overthrowing regimes abroad, as well as involving ourselves in situations in which we have no right to intervene.” (6)

But drawing conclusions about the foreign policy of the United States from unofficial statements seems simplistic. At the moment of this writing, any speculation as to the policy choices of Trump’s foreign policy is premature.  One can’t predict his policy with regard to the Near and Middle East, since he has not yet even formed his cabinet. Moreover, presidents in office can change their tune in the course of their tenure.  The case of George W. Bush provides an excellent example.

Like Donald Trump, George W. Bush was a conservative Republican non-interventionist. He advocated “America First,” called for a more subdued foreign policy and adopted Colin Powell’s realism “to attend without stress” (7) with regard to the Near and Middle East. But his policy shifted to become the most aggressive and most brutal in the history of the United States. Many international observers argue that this shift came as a response to the September 11 attacks, but they fail to note that the aggressive germs already existed within Bush’s cabinet and advisers: the neo-conservatives occupied key functions in his administration. (8)

Up until now, Trump’s links with the neo-cons remain unclear. The best-known neo-cons, Paul Wolfowitz, William Kristol, and Robert Kagan, appear to have lost their bet by supporting Hillary Clinton’s candidacy. But others, less prominent or influential, seem to have won it by supporting Trump: Dick Cheney, Norman Podhoretz, and James Woolsey, his adviser and one of the architects of the wars in the Middle East.

These indices show that nothing seems to have been gained by the South, still less by the Near and Middle East. There appears to be no guarantee that the situation will improve.

The non-interventionism promised by Trump may not necessarily equate to a policy of isolationism. A non-interventionist policy does not automatically mean that the United States will stop protecting their interests abroad, strategic or otherwise. Rather, it could mean that the United States will not intervene abroad except to defend their own interests, unilaterally–and perhaps even more aggressively.  Such a potential is implied in Trump’s promise to increase the budget for the army and the military-industrial complex.  Thus, it is more realistic to suppose that as long as the United States has interests in the countries of the South and the Near and Middle East, so long it will not hesitate to intervene.

In this context, Clinton’s defeat and Trump’s accession are not sufficient reasons to declare the decline of interventionism—the end of an era and the beginning of another. The political reality is too complex to be reduced to statements by a presidential candidate campaigning for election, by an elected president, or even by a president in the course of performing his office.

No one knows what the future will bring.