Did Assad use chemical weapons on Khan Shaikhoun to score an own goal in the international arena? 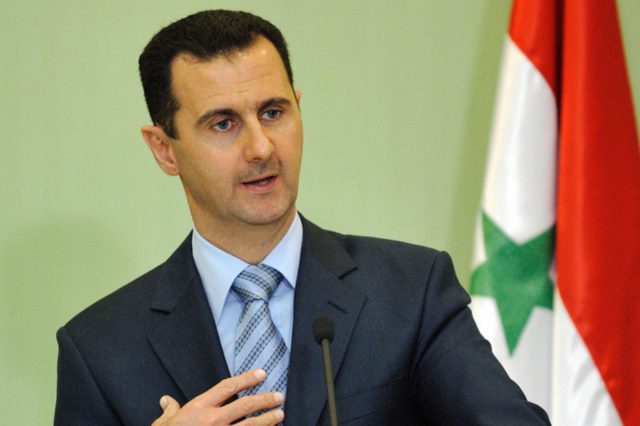 The first news came from Reuters, framed accusingly: “Syrian government chemical attack,” and quoting, as usual, rebel sources. The world stood by instinct against the regime in Damascus following the images of the victims of this attack, an atrocity against civilians which included many children. Khan Shaikhoun, a northern Syrian city in rural Idlib, is a core al-Qaeda (along with other jihadists and rebels) stronghold. Why would the Syrian President Bashar al-Assad attack eastern Khan Shaykhoun with chemical weapons?

Correspondents in Beirut, Amsterdam, Ankara, Istanbul, Brussels, Geneva, Holland, Washington and the United Nations wrote the Reuters article . Most of them have never been to Syria in the last few years and their source is “rebels” in al-Qaeda held territory and “information” from other social media accounts. But this is not the only influential media source that writes about Syria and has clearly never been to the country at any time during the last 6 years: the Washington post also does the same. The UN High Representative for Disarmament Affairs (and a UK diplomat) doesn’t share the media “insightful information”.

Is journalism concerned with looking for the truth, or is it more important to follow a specific “newspaper policy” ? In fact, American media and analysts have been angry – not only with Assad – but above all with their newly elected President Donald Trump, watching every step or political move he makes since he took over in order to be able to to criticise him. Assad is simply a pawn in this US  political media game.

Assad avoided the US war by agreeing to destroy Syria’s chemical weapons programme to launch years later a chemical attack? We should look at who would benefit from the use of Sarin gas against civilians at this particular moment in Syria.

Several weeks ago, the al-Qaeda  (under the name of Hay’at Tahrir al-Sham) Emir in Syria, Abu Mohamad al-Joulani, supervised the advance of his forces – along with other jihadists and US vetted groups under Al-Qaeda command – on Jobar (the Damascus outskirts) and Hama. Al-Qaeda and its allies managed to occupy considerable territory, surprising the Syrian Army. Following weeks of fighting, Damascus and its allies not only recovered all the lost territory in Jobar, but also advanced further in Al-Gabone, an area never reached for over 4 years. In Hama also, the Syrian Army managed to absorb the shock wave of the first attack and counter-attacked, recovering almost 90% of the lost territory. As in Aleppo, Joulani supervised the offensive to break the siege of the Syrian northern capital, supervising the military operations room and finally losing the battle, leaving behind hundreds of his militants dead on the battlefield.

In the north-eastern rural Aleppo, the Syrian Army is advancing into ISIS (the “Islamic State” group) occupied territory and has reached the Euphrates limit where the US forces draw the “red lines”, marking the beginning of “Kurdistan Syria” or the “Kurdish Federation” or canton in what the US military command promotes as “the right of the people in north Syria to self-determination”. The US forces enjoy the use of two main airports at the moment: one in Kobane (Ayn al-Arab) and one at Tabqa (with 2 runways under restoration at the moment by American engineers). This is the “safe zone” that President Trump spoke about concerning his intentions in Syria, a term which camouflages a new US occupation of land in the Middle East.

At the same time, the Russian and Syrian forces stopped the advance of Turkey toward ISIS territory and prevented Ankara’s forces and their Syrian proxies from attacking the Kurds in Manbij and Afrin-  to the dissatisfaction of President Erdogan.  Damascus can live with the Kurds – who are Syrian citizens and part of Syria – because these have roots in another part of the country, in north-west Afrin and in Aleppo. The Kurds need Damascus’s continuing collaboration. Damascus is determined to make life difficult for the US forces if these remain in the country and build military bases. The Syrian President doesn’t see an existential threat from the Kurdish side and considers al-Qaeda the real danger to eliminate. ISIS is not mentioned because it is fading away: only insurgents will be left in Bilad al-Sham which is not the case for al-Qaeda, well established in Syria.

On the political side, Assad enjoys a privileged position today, experiencing international support he never had in 6 years of war in Syria: the US, France and the UK all announced (prior the Khan Shaykhoun attack) that their objective is no longer to remove Assad from power. This announcement triggered outrage from the Syria opposition and the western media who saw in this message another opportunity to attack Trump. Even the Israeli Prime Minister Netanyahu was “shocked” by the “deliberate attacks on Syrian civilians”. Attacking innocent civilians must have been quite a surprise for the Israeli government.

Finally, there is an ongoing negotiation between Qatar (representing al-Qaeda) and Iran (representing the Syrian government) which relates to the besieged cities of Fua-Kefraya (surrounded by al-Qaeda and its allies) and Zabadani-Madaya (surrounded by Hezbollah and the Syrian Army). The negotiation consists in initiating a demographic exchange where 8,000 civilians (out of approximately a total of 23,000 on each side) would leave on both sides to be relocated. The Fua-Kefraya inhabitants would settle in Quseyr, and the Zabadani-Madaya in the area left by the Alawites in northern Syria. This exchange was due to start on Wednesday-Thursday this week but was postponed for another week due to the “Sarin attack”.

The Fua-Kefraya versus Zabadani-Madaya exchange may not be straightforward. When Aleppo was reconquered by the Syrian government forces, the evacuation of tens of thousands of civilians was linked to the evacuation of only 1,250 civilians from the besieged city of Fua. Ahrar al-Sham militants, jihadist rebels, burned the buses but later allowed the exchange to take place. There are serious differences within al-Qaeda where many militants oppose this exchange. Nevertheless, it is in the advantage of Damascus and its allies to see the deal reach a positive outcome.

So all circumstances work against Assad if he uses chemical weapons against Khan Shaykhoun or against any other place in Syria: the consequences would be entirely to his disadvantage on all fronts, military, political, and international.

It is certainly true that the use of chemical weapons in Duma in the last years of the Syrian war facilitated the accusations against Assad this time. The Russian Defence Ministry said that the poisonous gas had leaked from a rebel chemical weapons warehouse in Khan Shaykhoun hit by Syrian Air Force strikes.

So why did the world media rush to condemn Assad (prior any official investigation) and every voice rejecting the idea of a regime change? Is it because the mainstream media and “born again Syria analysts” have become, in their own eyes, an entity per se with the right to “judge, condemn and pretend that decision makers should listen to their recommendations and do what experts believe it is right”? Those “Syria experts” – whose feet have never touched the soil of Syria (some have never even travelled to the Middle East, let alone experienced one of its many wars in these last decades) – gather their so-called “expertise” from following social media and “breaking news” very closely, just as if they were themselves part of a well established news agency or, like this author, journalists on the ground and really on the spot.