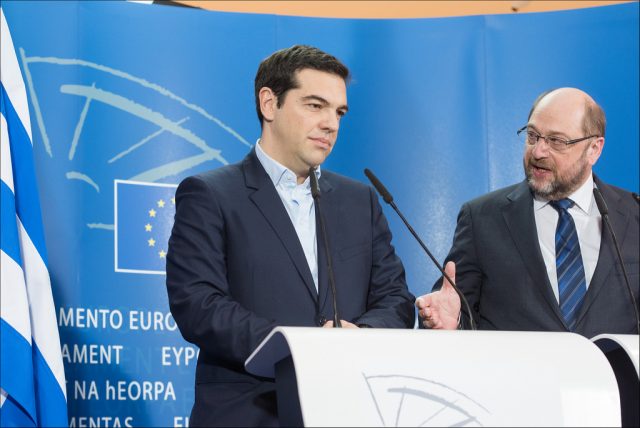 A catastrophic multi-bill that brutally affects the interests of workers, consumers and the poor and lower middle classes was approved by the Greek government on Monday, January 15, amid strikes [i], closing the third assessment.

Despite the SYRIZA-ANEL attempt to downgrade its importance, the truth is that the content of the 1,531 pages of the multi-bill deteriorate the position of the popular masses in the long run.

Even if there are no new fiscal measures, as the government has rightly claimed, there are at least ten measures that deepen the despotism of capital.

However, the truth is, that there is no need for new fiscal measures! Having the Government adopt the “cutter” -an automatic fiscal mechanism-, which in an event of divergence will automatically trigger cuts in public spending, and the simultaneous target of on primary surpluses of 3.5% by 2022 and 2% by 2060 [ii], it is obvious that there is no need for adopting new fiscal measures. But this does not mean that better days are coming. Harsher days are before us, despite the efforts of our Prime Minister to embellish the situation. As a matter of proof is the upcoming tax increases of 2% or 1 billion in the new year, as required by the state budget.

Let’s take a closer look at what the SYRIZA-ANEL MPs unconditionally voted on Monday, as a precondition to receive a disbursement of 3-4 bn. euros [iii], according the 3rd Memorandum of Understanding which signed Tsipras with the creditors [iv], humiliating once again the Left by identifying it with the most unpopular policies:

1 Electronic auctions. Aiming at directly restricting the political cost from the surging wave of protests every week in the peace courts and to facilitate in the long-run the banks to complete the clearance of tens of thousands of homes, the Government transposes auctions to the Internet. By February 21st, and regardless the date of the claim execution, the auctions are “invisible”, thus starting a new round of downgrading the heavily indebted households that under the responsibility of the SYRIZA-ANEL’s government will be thrown out on the streets en masse. The rescue of the banks is once again promoted against the people.

2 Prohibition of strikes. According to Article No. 211 “a special quorum is needed at the general meetings of the trade unions, in order for the debate to take place and the decision to declare a strike to be taken. In particular, it stipulates that at least one of the registered members of the trade union must be present”. This article serves the interests of the Greek Industrialists Organization and facilitates the regime of generalized authoritarianism in workplaces. In particular, it aims to nullify a protest movement that will attempt to recover the losses of the Memorandum period.

3 Integration of 14 Public Services and Utilities (DEKOs) on the Privatization Mega-fund. Under Article 380, a total of 14 DEKOs will be transferred directly to the Privatization Mega-fund (Hellenic Holdings and Property Company), which employ around 40,000 employees: 34% of the Public Power Corporation (with 17% to remain on the hands of the Hellenic Republic Asset Development Fund, heading for sale), 50,3% of Athens Water Supply and Sewerage Company, 51% of Thessaloniki Water Supply & Sewerage, Hellenic Post, public transports “Athens Mass Transit System”, “Urban Rail Transport” and “Road Transport Company”, 25% of Athens International Airport, Central Market and Fishery Organizations, Thessaloniki Central Market, Thessaloniki International Fair-HELEXPO, Hellenic Duty Free Shops, Hellenic Salt Works, Etva Industrial Zones, Corinth Canal and Athens Olympic Center. This change accelerates and facilitates their privatization which is a step forward from the pan-European sell-off of the public property [v]. What is striking is that the directors of the sell-out of the Greek public property, that is, the members of the Hellenic Republic Asset Development Fund, are exempted from the obligation of declaring personal assets!

4 Benefit cuts. The review of the award criteria will deprive the allowance from approximately 15,000 families, mainly families with three children, with income of more than 33,000 euros. Moreover, 54,550 families with an income of more than 13,500 euros, who have three or more children, will suffer cuts from 1,66% to 32,12%. The review of the benefits policy, which increases the total amount of the budget for benefits, obeys a neoliberal prescription that subsidizes only the extremely poor, featuring those who have underpaid jobs even as middle class, as recently Minister Eucl. Tsakalotos stated by the step of the Greek Parliament.

5 Energy stock market. The explanatory note of the multi-bill clearly states that the purpose of the creation of the energy stock market is “the full alignment with the EU rules for the completion of the single European energy market”. Therefore, the EU is the culprit of financializing a social commodity such as energy, which will mean further privatization, which will make it even more inaccessible to citizens than it is today. A result of the privatization so far, which has resulted in an increase in prices, is the explosion of the phenomenon of electricity-stealing, as officially described. Based on data from the Hellenic Electricity Distribution Network Operator, 3,226 cases have been identified in 2011 and 11,528 in 2016, i.e. an increase of 400%!

6 New Casino licenses. The changes envisaged for the casino are related to the issuance of 4 new licenses (Mykonos, Crete, Santorini, Florina), removal of the ticket, tax reduction to 20% and incentives for new construction. This change, however justifiable in the name of revenue growth, brings gambling closer to the citizen and the tourist. In order to increase public revenues, an unwritten commitment to a not-so-easy access to the casino is abandoned, so that citizens are pushed into gambling, for the benefit of not only public revenue and maybe not even their own. Instant winners are an extremely closed circle of “investors” who control black money around the roulettes and slot machines.

7 Deregulation in pharmacies – bakeries. Since 2011, pharmaceutical industry and large commercial chains have been calling -through creditors- for the release of pharmacy opening hours. And SYRIZA was the one to impose it, despite the apparent negative effects on the market caused by the partial liberalization of the opening hours that has led to the creation of two-speed pharmacies and a chaotic landscape with some pharmacies following the new extended hours (8 a.m – 11 p.m) and others the old ones. The multi-bill, by not proving a maximum number of opening hours, will lead to the closure of the small pharmacies and the dominance of the big ones. Moreover, by reducing the required square meters for bakeries it will lead to the prevalence of the big chains at the expense of the quality of food.

8 New wave of mergers in schools. Apart from increasing the hours that teachers are obliged to be present in schools (Article 245), as stated in the introductory report “specific criteria, procedures and timetables are set for the mergers of primary and secondary schools, with the aim of rationalizing school units”. With Article 246 of the new multi-bill, SYRIZA follows the path that Anna Diamantopoulou set as Education Minister of PASOK when, for the sake of cost saving, she merged school units by applying a “school” Kallikratis Plan (major reform of the country’s administrative divisions, promoting merger of units in the sake of economy).

MPs ready for everything at the service of the oligarchy…

Greece: Back to the Future of Austerity and Debtocracy!