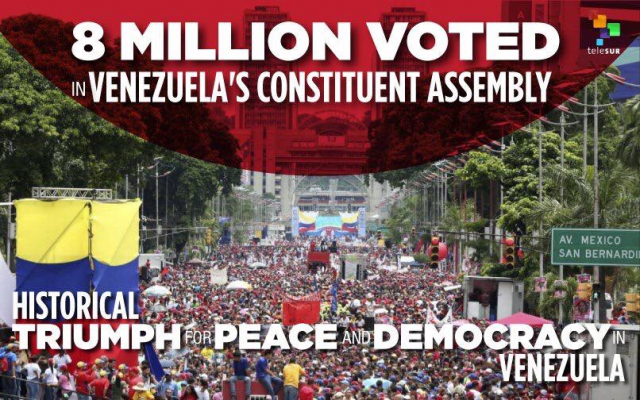 When you think about “Fake News,” you probably think about “internet-only” stories like “Pizzagate,” a story that only the most delusional Trump supporter could have believed. But the important fake news, the fake news that has orders of magnitude more impact, is broadcast into your living room every night, or appears on your doorstep (or in your tablet) every morning. And rarely has that fact been on display more clearly than in the previous two days, as the U.S. media covered the voting for the new Constituent Assembly in Venezuela.

One of the most common lies, voiced by David Muir on ABC News Tonight on Monday (this and other examples here come from the author’s personal observations; it’s a certainty that they were repeated in pretty much every other corporate media outlet) claimed that the vote in Venezuela gave President Nicolás Maduro “almost unlimited power,” a claim which is simply a baldfaced lie. On Tuesday, The New York Times featured a variant of that claim, weirdly asserting that “It was a fait accompli. There was no option for voters to turn down the plan.”

But there was no “plan” to turn down, nor did the vote give President Maduro a single additional power. The election accomplished one thing and one thing only — electing members of a new Constituent Assembly. That Constituent Assembly will propose changes to the Venezuelan Constitution, which will then be voted on by the entire population. What those changes will be is unknown, as is whether they will be approved afterwards.

But fake news in the mass media isn’t always as simply as out-and-out lies. There is also “Fake News by half-truth or distortion.” On Monday The New York Times first reminded its readers in its coverage of the election that the opposition held a ‘plebiscite’ vote last week in which more than seven million votes were cast. It does qualify that with “opposition leaders said,” but otherwise fails to challenge the claim, although that vote was not held in standard polling places using standard voting machines, and the number is simply an unverified (and unverifiable; the ballots were burned afterwards!) claim of the opposition. In the next paragraph it reports Sunday’s total of more than eight million votes and immediately calls it into question, based on an independent estimate by…wait for it…an investment bank! You probably didn’t know investment banks qualified as election experts! The Times also reported the murder of one of the candidates on Saturday night, but omitted the fact that he was a “Chavista,” a government supporter.

Another article on the election turnout, this one from NBC News, had a headline which read “Venezuela: Government, Opposition Clash Over Turnout Numbers in Controversial Elections.” Like the Times, NBC News led with the investment bank’s “poll,” and only after that reported the official, verifiable government total (a total reported by the well-respected National Electoral Council, the same body whose numbers were unchallenged two years ago when the right won a majority in the National Assembly). Contrast a headline like that with the coverage of the opposition ‘plebiscite,’ which simple reported the opposition’s claims, with no questioning whatsoever, even those those claims were most assuredly disputed by the government.

A New York Times headline Tuesday reads “Venezuela Moves to Stifle Dissent by ‘Any Means Necessary.’” But that headline is quite misleading, as is the article. As we discussed above, Sunday’s vote only elected members of the Constituent Assembly, nothing more. The only concrete fact discussed in the article is that two opposition leaders, who had been under house arrest for their role in inciting violence, had their house arrest revoked. The Times does mention the fact that the two had been under house arrest…in the 26th paragraph, 25 paragraphs after describing how they were “hauled off” to jail, screaming that they were being “kidnapped” (A CNN report told how they had been “yanked from their homes,” and didn’t mention the house arrest at all). Seven paragraphs further on, the Times finally mentions that the two had violated the terms of their house arrest. Everything else in this article, however, is pure speculation on what might happen in the future. Furthermore, the “By Any Means Necessary” quote is simply the opinion of ”an adviser at the Center for Strategic and International Studies,” and not, as one might assume from the headline, something that Maduro or someone else in the government said.

One of the most subtle, and in some ways most insidious variants of news bias is “Fake News by omission.” A simple example is the choice of photos. If you read TeleSUR, you would have seen numerous photos of long lines of people waiting to vote on Sunday. But no such photos appeared on CNN, or in The New York Times, or any other Western media. Because such a picture, worth a thousand words, would have put the lie to the claims of a low voter turnout being pushed by those outlets.

Reading Western media, any typical reader would have the impression Sunday’s election was a sham, a rubber-stamp. You would never guess that there were 6,120 candidates vying for 545 spots, because that fact has simply never been reported by them. Tuesday’s Times article, for example, says that Venezuelans had to “select from a list of trusted allies of the governing party;” it “forgets” to mention that the opposition boycotted the election, and that opposition candidates chose not to be among those 6,120 candidates who did run. Nothing prevented them from doing so.

Nor would you know that, just like a Constitutional Convention in the U.S., the Constituent Assembly in Venezuela is a process provided for in the existing Constitution, because that fact too was not reported by a single ”newspaper of record” (or anyplace else in the corporate media). Neither was the fact that any changes proposed by the Constituent Assembly will be voted on by the entire population.

Two hundred election centers were attacked during the election, policemen were injured by bombs, and, as mentioned above, one (or two, reports are a bit unclear) Chavista candidates were murdered just prior to the election. When the Taliban carried out similar actions in Afghanistan during elections in that country, they were rightly called “terrorists” by the Western media. But in Venezuela, not only haven’t we seen that term used for the actions of the opposition, but most of these things haven’t been reported at all.

Solidarity activists in the West have many tasks in defending the Bolivarian Revolution, but countering media lies like these is one of the first. Demand the truth, the whole truth, and nothing but the truth, and make sure your friends, family and coworkers are hearing it as well. Because they won’t be getting it from the Western corporate media.