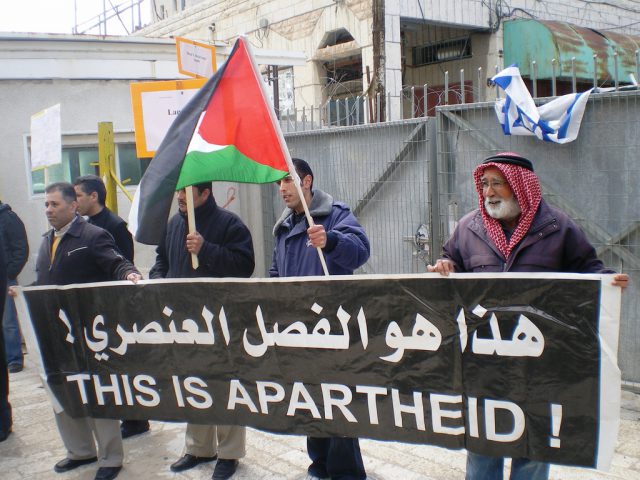 Investig’Action: The scathing report produced by the United Nations ESCWA was followed by a pressure campaign from Israel and the United States. Following pressure from the UN secretary general to retract the report, ESCWA head Rima Khalaf chose to resign rather than retract or water-down the report. The report was removed from the UN website, but it can be found here or here.

A damning United Nations Economic and Social Commission for Western Asia (ESCWA) report published on Wednesday (March 15) concluded that Israel was guilty “beyond a reasonable doubt” of imposing apartheid policies against Palestinians, urging the international community to abide by its “legal obligation” to punish such discriminatory measures.

“Aware of the seriousness of this allegation, the authors of the report conclude that available evidence establishes beyond a reasonable doubt that Israel is guilty of policies and practices that constitute the crime of apartheid as legally defined in instruments of international law,” an executive summary of the report read.

While the report has garnered praise from Palestinians, Israeli officials have compared the report to Nazi propaganda and called for UN Secretary-General Antonio Guterres to publicly reject it.

‘An Israeli regime of racial domination’

Written by former UN Special Rapporteur on the occupied Palestinian territory Richard Falk and Virginia Tilley, the report slammed Israel for implementing a variety of different policies with a “core purpose of racial domination” privileging Jews — both with or without Israeli citizenship — over Palestinians.

The report based its conclusions on the Rome Statute of the International Criminal Court (ICC), which defines apartheid as “inhumane acts … committed in the context of an institutionalized regime of systematic oppression and domination by one racial group over any other racial group or groups and committed with the intention of maintaining that regime,” emphasizing the intentional nature of Israeli policies to maintain Jewish domination in Israel and the occupied Palestinian territory.

The report highlighted in particular Israel’s discriminatory land policies as enshrined in the country’s Basic Law — the Israeli equivalent of a constitution — stating that “effectively, Israeli law renders opposition to racial domination illegal.”

ESCWA also detailed some of Israel’s “demographic engineering” policies, including granting all Jews the right to obtain Israeli citizenship, while barring millions of Palestinians with documented ancestral ties to the land on which the state of Israel was established in 1948 from entering; preventing family reunification for Palestinian citizens of Israel married to Palestinians from the occupied territory; and maintaining segregated communities within Israel with wildly disparate allocation of resources.

Furthermore, the report stressed the fundamental importance of Israel’s different legal codes applying to Palestinians within Israel, in occupied East Jerusalem, the West Bank, and the besieged Gaza Strip as “the principal method by which Israel imposes an apartheid regime.”

“This fragmentation operates to stabilize the Israeli regime of racial domination over the Palestinians and to weaken the will and capacity of the Palestinian people to mount a unified and effective resistance,” the report read, adding that the fragmented nature of Israel’s legal discrimination against Palestinians “impedes international recognition of how the system works as a complementary whole to comprise an apartheid regime.”

Falk and Tilley notably emphasized the case of the West Bank as the most striking example of apartheid.

“The territory is administered in a manner that fully meets the definition of apartheid under the Apartheid Convention: except for the provision on genocide, every illustrative ‘inhuman act’ listed in the Convention is routinely and systematically practiced by Israel in the West Bank,” the report stated.

“Friendly advice — don’t read it without anti-nausea pills,” Nahshon added in a statement on social media.

NGO World Jewish Congress (WJC), meanwhile, called the report a “piece of vile propaganda that has no basis in fact.”

“Mr. Falk and Ms. Tilley seem to live in a parallel universe. They don’t care about facts when these don’t fit into their one-sided narrative,” the Zionist organization said in its statement.

Israeli news outlet Arutz Sheva reported on Thursday that a coalition of American Jewish organizations had called on the UN secretary-general to publicly reject the ESCWA report, accusing its authors of launching “unjustified and outrageous attacks on Israel.”

Israel and its supporters have long claimed that Israel’s insistence on being recognized as a Jewish state was not different from other countries’ national identities, without elaborating on how the enactment of policies to maintain and privilege a Jewish national religious identity was compatible with equal rights for all people under Israeli civilian and military rule regardless of religion.

The ill-treatment of Palestinians has also been justified by Israel as being “temporary” pending a resolution to the Israeli-Palestinian conflict, despite an increasing number of far-right political figures calling for the abandonment of a two-state solution and the permanent annexation of the occupied Palestinian territory without granting equal rights to Palestinians.

The ESCWA report pre-emptively rejected Israeli claims that its treatment of Palestinians did not amount to apartheid.

“None of those arguments stands up to examination,” the report stated, notably denouncing the “overly literal comparison with South African apartheid policy” used to disingenuously contend that the definition does not apply to Israel.

“Some people don’t like to hear the word apartheid, but this is what is going on here, this is what Israel is doing to our people,” he said.

Given the report’s unequivocal conclusions, Falk and Tilley said Israel’s apartheid policies amounted to “the commission of a crime against humanity,” and urged the international community to abide by its “legal obligation to act within the limits of their capabilities to prevent and punish instances of apartheid.”

The authors notably called on states not to recognize Israel’s apartheid regime as lawful, to not aid or assist Israel in maintaining apartheid, and to work collectively to bring the Israeli apartheid system to an end.

Alaa Tartir, program director for Palestinian think tank al-Shabaka, told Ma’an that the report was “very important, evidence-based, embedded in international law, and reflects the apartheid nature of the one-state reality in Palestine/Israel.”

Tartir said he was hopeful that the report could bring about positive change after decades of military occupation and political stalemate.

“All these policy recommendations, if and when implemented, can be a game changer and will change the existing skewed power dynamics,” he said.

“Palestinian must make best use of the findings of this report and demand accountability mechanisms to ensure that the set of conclusions and recommendations are implemented and translated into political and legal actions.”

However, it remained unclear as of Thursday how much of an impact the ESCWA document would have on broader UN diplomacy, as news agency Reuters quoted UN spokesman Stephane Dujarric as saying that it had been published without consulting the higher echelons of the United Nations, and that it did not reflect Secretary-General Guterres’ position.

Palestinians, activists, and a number of intellectuals have increasingly compared Israel’s occupation of the Palestinian territory with an apartheid system over the years, and sought to use similar tactics as those that took down the apartheid regime in South Africa.

The Boycott, Divestment, and Sanctions (BDS) movement founded in 2005 as a peaceful movement to restore Palestinian rights in accordance with international law has been largely influenced by the South African anti-apartheid movement in the 1980s.