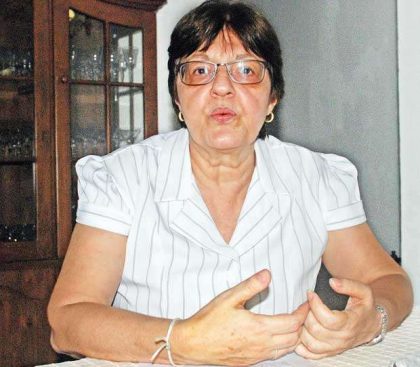 Cuba’s National Assembly elected Miguel Diaz-Canel as the country’s president in April. Diaz-Canel followed Raul Castro who served two consecutive terms from 2008 when the health of his brother Fidel was in decline. Fidel Castro, who led the 1959 revolution that overthrew Fulgencio Batista’s dictatorship and ruled the country since, died in 2016.  Lasanda Kurukulasuriya talked to Cuba’s Ambassador in Colombo, Elena Ramos Rodriguez, on what may be expected from the new leader from a post-revolution generation, US president Donald Trump’s hardened policy towards Cuba, its effects on the Cuban people and Cuba’s response to the intensified economic blockade imposed by the US government.

Excerpts from the interview:

Cuba’s new president Miguel Diaz-Canel was born a year after the 1959 revolution, representing a relatively younger generation of politicians. Does this generational shift point to a change in Cuba’s style of government in years ahead?

I want to highlight the significance of the last session of the Cuban parliament, on April 18-19 when Mario Miguel Diaz-Canel Bermudez was elected the new President of the Council of State and President of the Council of Ministers. I think the new leader will continue the revolutionary process, will continue the development of our country, the development of our socialism. Cuban people express their support for this electoral process. The people elect the members of parliament, the parliament elects the Council of State, and the Council of State elects the president. This process comes with the support of the people because a majority – 85.65% attended the polls to elect their representation in parliament, from each municipality. Voting is voluntary … if you vote it means you support (the process).

Diaz-Canel’s predecessor Raul Castro had started introducing certain changes – reducing the size of the state sector, encouraging more private enterprise, loosening some controls etc. with benefit to the economy. Will the new president continue on this trajectory?

The Cuban government and people are all working on updating the Cuban economic model. It is a complex process. It’s changing not because of pressure from outside but for Cuban society, to establish the economic and social guidance. It is a broad process, with many meetings with people in their workplaces, residential places etc. In Cuba the programme does not change with each president. The guidelines are adopted with the opinion of all the population – in different ways they participate in the process.

Former US president Barack Obama had started a process of normalization of Cuba-US relations, signaled by re-opening diplomatic missions in the two countries. Under Trump this process is being reversed, and the economic blockade is being intensified. What will Cuba’s strategy be, to cope with this situation?

To stop drug trafficking, terrorism, illegal immigration. Intelligence is not the interest of one country – its for both countries. We share maritime borders. We have to cooperate for example in maritime rescue, to save people. Or to avoid contamination of our maritime waters.  Cuba wants to continue negotiating with the US government, but on conditions of equality and respect for our sovereignty. Cuba will not resign any of its principles. Principles are non-negotiable.

But the fact is that you have a US president whose attitude is belligerent. How will you face this situation?

We have to face the new measures. In November last year the US Departments of State, Treasury and Commerce issued new provisions and regulations to implement and strengthen the blockade against Cuba – a week after the Nov. 1st vote in the UN General Assembly on the necessity to lift the blockade. These measures were in a new executive order of the president called “National Security Presidential Memorandum on Strengthening the Policy of the US towards Cuba.”  They restrict travel of American citizens to Cuba, restrict commerce between the two countries.  During Obama’s time it was more flexible on some issues, but the blockade was still there, especially in the financial/ banking sector. In 2016 the US abstention (during the UN vote on lifting the blockade) was a hopeful moment.  These measures confirm the regress of bilateral relations as a result of the decisions of the government of Donald Trump.  It is also important to say, these measures ignore US public opinion of about 75% which is a great majority, and the international community, and of the Cuban immigrants in the US.  The majority of Cuban immigrants want normal relations.  Only a small group in Florida want to continue the blockade.  This transformation ignores the majority of the international community. On Nov. 1st 2017 for the 26th consecutive occasion, the resolution on “The necessity of ending the economic, commercial and financial embargo imposed by the USA on Cuba” was approved by the General Assembly of the UN, with 191 votes in favour and 2 against: the US and Israel, confirming once again the absolute international rejection of this policy. Cuba will continue to present the resolution as long as the embargo is in place.  Unfortunately the resolution is not binding. But it’s a good step to demonstrate that the international community supports Cuba.

The UN Secretary General in July last year presented a report, at the request of the members of the General Assembly, on the implementation of this resolution. Cuba said “the accumulated losses caused by the embargo during nearly six decades it has been in place amount to US$ 822 billion.” Can you give an example of how this translates into deprivation in the day to day lives of the Cuban people?

The blockade affects all fields – business, health, education, agriculture. To give an example – in March 2017, MediCuba, the company that imports and exports medical products, received a communication from the supplier Lindmed Trade of Spain, saying it could not supply the antibiotic Ciprofloxacin lactate because the manufacturer Claris Otsuka refused to sell the goods because Cuba was subject to sanctions imposed by the US.

Ciprofloxacin lactate is a broad spectrum antibiotic used for adults and children in the treatment of respiratory ailments. Also for skin, soft tissue, bones and joints affected by bacteria. This is an antibiotic used in all hospitals. This affects the health of our people not because the government doesn’t give the resources but because we cannot buy from the supplier.

Could you briefly explain the extra-territorial aspect of the embargo, how third parties – other states – are punished for having transactions with Cuba? An example?

The case I just mentioned is also a good example of the extra-territorial impact. The supplier, the Spanish company cannot trade with Cuba. They too are affected. Legally they should be able to trade with Cuba. Also, many other companies have been sanctioned, fined, for doing business with Cuba.

To give another example, Cuba produces nickel. The company was unable to export 3,500 tons of nickel sulphide produced in 2016 because they could not find a bank that would open a Letter of Credit. The loss to the Cuban economy was $23,600,000.

In June 2016 the Netherlands mail and parcels company TNT returned to the Consulate General of Cuba in Madrid, two postal consignments addressed to the embassies of Cuba in China and Indonesia containing passports of Cubans living abroad.  The company claimed that it had returned the consignments owing to corporate instructions related to the US embargo.

The rest of the world supports Cuba on the need to end the embargo, which is in violation of the UN Charter and international law. Can you explain briefly, what is the problem the US has with Cuba?

The blockade is the main obstacle to the development of our country. The US wants to provoke a change of regime, by provoking anger of the people through shortages, by depriving them of food, medication etc. They want a regime change favourable to the US. It didn’t happen because the Cuban people stayed brave. This policy satisfies only the interests of a small minority of the American and Cuban-American extreme right-wing of South Florida, whose interest is to reverse the process of normalization of bilateral relations. It is a violation of human rights in general. We have a good economy but it would be better if we didn’t have the blockade. Tourism is greatly affected. People like to visit Cuba, last year we had four million visitors. Imagine if there was no blockade! American citizens are not allowed to travel to Cuba as tourists, it’s prohibited. They need a special license from the Treasury.

Cuba sends its professionals like goodwill ambassadors to all parts of the world – doctors, teachers, artists, agriculture experts – demonstrating the high level of culture and education it has achieved for its people, in spite of the problems caused by its big neighbour. What is the secret of this achievement?

Our policy is ‘internationalist.’ One of the main principles in our relations with other countries is that we share what we have. If we can provide doctors, we do that. Our policy is to give what we have. Others give what they don’t use. Fiftyfive percent of state resources is allocated for budgeted activity such as education, public health, social security, pensions.  That’s why there is a high standard. We believe you must support everybody. You cannot have homeless people. A mother who cannot work because her child has a disability will be provided with a government pension.  It is a policy that demonstrates that even a poor nation that has not too much resources – if it uses resources for the welfare of the people – can grow its human capital, and improve living standards of the people, despite major challenges it faces.  This is, maybe, our ‘secret!’

Sri Lanka was one of the first countries to establish diplomatic relations with Cuba after the revolution and (in the words of Prime Minister Ranil Wickremesinghe in his condolence message on the death of Fidel Castro) “Cuba has been a great friend Sri Lanka could count on.” How can the Cuba-Sri Lanka relationship be taken forward?

Sri Lanka and Cuba have historic bonds of friendship and cooperation. Sri Lanka established diplomatic relations in 1959 after the triumph of the revolution, at the very beginning. The first step was the visit of Che Guevara to Sri Lanka. Sri Lanka and Cuba both entered the Non Aligned Movement (NAM) in the same year, 1961. Cuba received the presidency of NAM from Sri Lanka in 1979. We have a long history of cooperation in sports, education, health, agriculture. At this moment we are working on areas of pharmaceuticals and bio-technology. In June a delegation from Sri Lanka visited Cuba to follow up on implementation of an MoU between the ministries of Science and Technology of the two countries. Last year a Cuban expert visited Sri Lanka to share expertise on the control of dengue. We are also working on registering in Sri Lanka a Cuban product for the treatment of diabetic foot ulcers.  It has an efficiency of over 80%, many people have saved their legs, avoiding amputation.  Cuba sincerely appreciates the support provided by Sri Lanka in its fight against the economic, commercial and financial blockade imposed by the United States against Cuba for almost 60 years. On Nov. 1, once again Sri Lanka voted in favour of the Cuban resolution against the blockade in the General Assembly of the United Nations.

“A lot remains to be done”: interview with Aleida Guevara