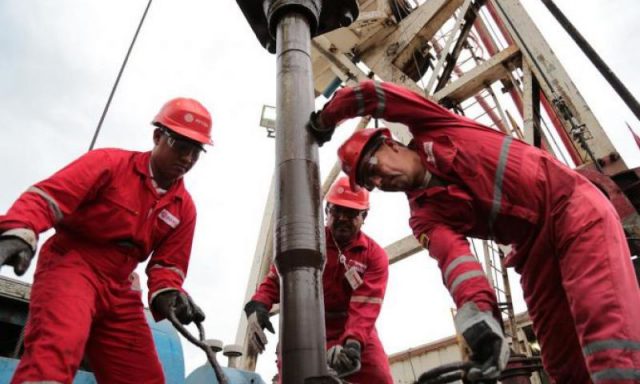 While chavismo pushes for dialogue with less than two months to go in what has been a chaotic year, corporations – be they oil, media or finance corporations – have been acting aggressively and at their own rhythm. The financial elite has taken the spotlight and aimed its weapons at the country’s main source of income. When it comes to real power, the strings are pulled behind the scenes.

Media and financial harassment against Pdvsa: making the bond swap operation fail at all costs

Pdvsa’s bond swap strategy, launched on September 16 and twice delayed in order to attract more funds, was a success: the Venezuelan oil company managed to exchange 52,57% of the amount put forward in this operation. This way it managed to save 2 billion and 899 million dollars by moving its debt payment deadlines from 2017 to 2020.

In other words: the heart of Venezuela’s economy – Pdvsa – responsible for 95% of export earnings, has managed, in the short and medium term, to avert a scenario that was critical for its financial stability and thus for the stability of the entire country.

As Misión Verdad commented at the time, this operation was attacked by the rating agencies, Standard and Poor’s, Fitch y Moody’s, that were convicted for defrauding American investors in 2008.

These agencies attributed a negative rating to this operation, hoping this would generate mistrust and fear on the investors and stop them from taking part. This is not a financial goal but a political one: as long as this operation failed, Pdvsa’s financial situation would be come more dire, making the country’s situation more dire, worsening – and politically directing – the economic hardship of the population, since the capacity to import essential goods – food and medicine – would be reduced to a minimum.

Soon more guns joined in from the media and corporate fronts. The New York Times, Reuters, Bloomberg, The Wall Street Journal and the Financial Times, to name just the outlets with the biggest impact on financial public opinion, embarked on a multi-pronged media campaign to demonise and diminish the international credibility of Pdvsa.

In the shady and volatile financial markets, style is much more important than substance. Your reputation defines how much you are worth, and not what you actually own. Each time Procter & Gamble launches a new shampoo its profits increase even before any bottles have reached the shelves and anyone has bought it.

With both fronts pressing in tandem relentlessly, the oil company Conoco Phillips brought a lawsuit against Pdvsa in Delaware a few days before the end of the bond swap operation, labelling such an operation as fraudulent for supposedly wanting to avoid inflated compensation payments due to nationalizations.

Pdvsa was subjected to a brutal financial, corporate and media attack during the whole operation. Even so, and with all the the candles lit by opposition leader Ramos Allup in hopes of a swap failure, the operation succeeded and the heart of Venezuela’s economy has seen a relief of its financial situation in the short term.

When best- and worst-case scenarios coincide

The bond swap is not an isolated strategy to improve the financial situation of Pdvsa and Venezuela, but a complement to recent efforts made by Venezuela and other OPEC countries, alongside Russia and other major players in the oil market, to have oil prices stabilize between 60 and 70 dollars per barrel.

Even the anti-chavista commentators on economic matters that are consulted by Venezuelan outlets agree that the short term stabilization of oil prices in this range, coupled to the savings garnered with the bond swap, would be enough for the country to fix its dollar deficit. This currency is needed to cover imports and stabilize the exchange rate, as well as to handle debt service in less vulnerable conditions in the medium term.

So a positive economic outlook for Venezuela is correspondingly negative for the financial elites.

A new wave of attacks

In this sense, the success of the operation and the possibility of an agreement to stabilize oil prices taking place, a new, and much more aggressive, stage of pressure and financial blockade against Pdvsa has opened.

Canadian corporation Crystallex has sued Venezuela for the same (non)reasons as Conoco Phillips, a move that would add to a possible evaluation of asset seizures worth 11 billion dollars that is being pursued by U.S. federal prosecutors in relation to alleged cases of corruption, according to Bloomberg.

Bloomberg not only sold the premise as the biggest oil asset seizure in recent history, it went as far as saying that this money would supposedly be given back to the country once it were in the hands of an anti-chavista government.

This first threat has some similarities to the “Lava Jato” case of Petrobras, where the high-profile corruption spectre was used as a mechanism for foreign intervention in Brazil. The financial and media circumstances that cut short Dilma Rousseff’s mandate came from these international manoeuvres.

It is worth recalling that just like Pdvsa is being sued by oil corporations, Petrobras was also the subject of judicial attacks from major banks – Goldman Sachs, Citigroup, Morgan Stanley, etc – under the pretext of safeguarding its loans to the company. Two different operations but cut from the same cloth.

The axis of conflict moves to the financial front

The plan of shooting at the heart of Venezuela’s economy is a political one. Venezuela has just managed to cancel the interest on the bonds that were not swapped and the rest of its payments. Even so, Venezuela’s country risk, as decreed by Deutsche Bank, a financial corporation on the brink of bankruptcy, remains much higher than that of countries with an unpayable debt such as the United States or Spain. It remains unchanged.

Comparison of debt as % of GDP and country risk for Venezuela, Spain and the U.S.

The MUD (opposition coalition) is nothing but an intermediary for these big corporate interests that are rubbing their hands at the prospect of plundering Venezuela’s riches once more. In truth they are what we are really up against.

The financial attacks, carried out by corporate actors that can influence American judicial institutions – the Departments of the Treasury and Justice, specifically – are on the rise with a concrete goal: suffocating Venezuela from a financial standpoint in the medium term to crush any signs of economic and political recovery from the chavista government.

They try to swing the conflict in their favour with a coup de grace being an international financial coup, built on judicial processes brought on by oil corporations, media propaganda and selective default ratings.

The strangulation tactic against Pdvsa, active on all these fronts, is meant to increase the financial blockade against Venezuela to further reduce its economic leeway and punish the population in its daily life, conditioning the financial standing of Pdvsa to hamper its recovery.

And the intensifying of this campaign is not the work of foreign state actors or internal actors, but of financial elites through the multitude of tools they possess – credit ratings, lawsuits, etc – to intervene financially, similarly to what has been tried against Russia and China.

The recent dialogue to stabilize internal political conflict with its wide international backing, the constant missteps of the MUD and the incipient economic recovery have shifted the conflict front-line to the financial front. After each step, after each lawsuit, no matter how narrow or restricted, a narrative is being built together with an operational framework to strike financially at our economic heart.

Directly hurting the common Venezuelan, by reaching into his pocket or his stomach, regardless of what the MUD or Hillary Clinton or Donald Trump might think, is becoming the main objective and strategy for financial elites in order to achieve the implosion of the country that they crave.

This is the enemy we must face: global economic powers with a wide arsenal of different weapons to suffocate a country that is trying to overcome severe difficulties. This is also foreign intervention, even though nobody calls it so. The real enemy is aiming its missiles at the heart.

Route of Coup Against Venezuela Begins at ExxonMobil