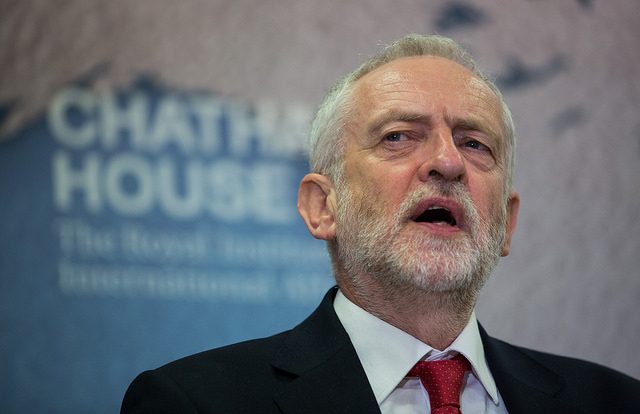 What about the immorality of facilitating the demonization of Israel’s victims and making those victims even easier to ignore?

This passage below from Stephen Bush’s latest on Jeremy Corbyn’s “anti-Semitism crisis” rings very true regarding Jon Lansman and a segment of the Labour left that lacks the willingness to stand up to Israel’s apologists or to fight for a civilized foreign policy. Lansman is on Labour’s National Executive Committee and also runs Momentum, a group that organizes support for Jeremy Corbyn’s leadership of the Labour party.

“Jon Lansman, Momentum’s founder and director, spoke out in the WhatsApp group in which Momentum members on the NEC liaise with the leader’s office, describing it as a “massive tactical mistake” to take disciplinary action against Margaret Hodge, a senior Jewish Labour MP, for attacking Corbyn on the issue of anti-Semitism, while failing to bring disciplinary measures against Willsman for his remarks on the issue at an NEC meeting. But Karie Murphy, Corbyn’s influential chief of staff, overruled Lansman, saying that Willsman’s apology on the issue meant the matter was closed.” [1]

When Corbyn was attacked in April for meeting a Jewish group that denounced the anti-Semitism smear campaign, Lansman offered the craven legalist defense that Corbyn met with them on his own time: “It was his night off. His office didn’t know he was there.”

The tactical idiocy of trying to appease bullies is proven by the last few years of increasingly wild antisemitism allegations against Corbyn. Newspapers now run deranged headlines saying Corbyn poses an “existential threat to Jewish life in Britain.”  At this rate headlines will soon explicitly call him the next Hitler (while also insisting that Nazi comparisons are anti-Semitic if used against Israel when it massacres Palestinians).

However, the tactical blunders Corbyn and his supporters have made, though very important, should be a secondary concern. What about the immorality of facilitating the demonization of Israel’s victims and making those victims even easier to ignore?

In response to Israel’s ongoing atrocities against Palestinians, Labour will make it their highest priority to police the language of the victims and those who try to defend the victims in an appropriately forceful way.  Corbyn clearly sent that message through his recent “apology” for attending a conference in 2010 in which a Holocaust survivor likened the barbarism of Israel’s government to the Nazis.

Corbyn said: “The main speaker at this Holocaust Memorial Day meeting was a Jewish Auschwitz survivor. Views were expressed at the meeting which I do not accept or condone.

“In the past, in pursuit of justice for the Palestinian people and peace in Israel/Palestine, I have on occasion appeared on platforms with people whose views I completely reject. I apologize for the concerns and anxiety that this has caused.”

Will Corbyn now apologize for “concerns and anxiety” his apology caused among Palestinians, who actually do face an existential threat, that the leader of a major western opposition party has sold them out? In fact, Corbyn’s apology also stupidly facilitated the smearing of a Holocaust survivor.

Stephen Bush’s article identifies John McDonnell, widely referred to as Corbyn’s right hand, as being in the appeasers’ camp along with Lansman.  It is worth recalling McDonnell’s remarks in response to Israeli troops murdering unarmed Palestinian protestors in March: “How many more Palestinians have to die from sniper bullets before the international community, including the UK government, mobilizes to press Israel to end this disproportionate response to the Gaza demonstrations? We desperately need a new international peace initiative.”

How does one “proportionately” enforce an illegal occupation and deny millions of refugees their legal right to return to land stolen from them? Moreover, as a direct consequence of the actions of Israel, child mortality among Palestinians is five times higher than it is in neighboring Israel according to UNICEF. That translates into thousands of children killed every year as a direct result of Israel’s economic strangulation of Palestine.  How is the economic strangulation of millions of people to be done “proportionately”? Would McDonnell applaud the Israeli officials who secretly made dietary calculations to determine how much they could choke Palestine before the humanitarian crisis caused too big a PR problem for them? Is that the way to “proportionately” starve people?

McDonnell ‘s call for a new “peace initiative” is risible. We are over fifty years into a “peace process” that has simply resulted in Israel constantly murdering Palestinians and stealing more of their land. Missing from McDonnell’s remark is any call for Israel to cut off UK arms sales or expel Israeli diplomats. Corbyn’s statement in response to the massacre was vastly better than McDonnell’s but still fell short. Corbyn merely called for a “review” of UK arms sales to Israel.

Now compare and contrast with what Jill Stein said in response to the massacre: “Israeli snipers killed an unarmed 15-year old boy, a disabled man, & 2 other Palestinians in Gaza Friday. Unconditional bipartisan US support has enabled Israel’s worst abuses. It’s time to cut off the $10M/day we send to Israel’s military.”

No use of McDonnell’s passive voice. No vague appeals to the “international community” to somehow “press” Israel to be more “proportionate”. She made a clear demand that her government imposes immediate consequences.

Emily Thornberry, Corbyn’s Shadow Foreign Minister, said Israel “stands out as a beacon of freedom, equality, and democracy particularly in respect of women and LBGTQ communities in a region where oppression, discrimination, and inequality are too often the norm ”. The kernel of truth in this vile apologetic is that in some ways Israel is not as backward as other UK-armed states like states in the region like Saudi Arabia.  It’s hard to stoop lower than a state that beheads people for sorcery, but therefore spinning Israel, which murders and imprisons Palestinian women (including children), as a “beacon” in the region is grotesque.  Asa Winstanley has elaborated on Thornberry’s groveling before Israel.

Another Shadow Minster of Corbyn’s, Nia Griffith, recently gave a speech trying to outflank the Tories from the right on military spending.

An imperialist foreign policy requires that allies of West be shielded from exposure. Israel is a quasi-US military outpost in very a strategically important part of the world, so it tends to get “singled out” for an extraordinary level of propaganda and material support from the West.  For obvious reasons, screaming “anti-Semitism” at its critics is a common tactic.

In any country, establishment propaganda tends to be more effective on foreign policy. That provides a powerful temptation to “strategically” focus almost exclusively on domestic policy and keep our heads down about crimes beyond our border for which we bear significant responsibility. As great a social movement leader as Martin Luther King Jr. spoke out against the slaughter in Vietnam much later than he wanted to as many within his inner circled pressured him to keep quiet.

Perhaps Corbyn will, in spite of his abject surrender on this issue, still make it into power but he will not bring any big change to the UK’s blood-soaked foreign policy unless Labour’s rank and file members can salvage something from this fiasco. Unfortunately, that will be difficult to do when a leader falters as badly as Corbyn has.

[1] Hodge called Corbyn “a fucking anti-Semite and a racist”.

Peter Willsman said the antisemitism smear campaign was being led by “some” “Trump apologists” in the Jewish community and that he had not seen any anti-Semitism in the Labor party.  His remarks, off the cuff at a meeting, were sloppy. He was ranting (quite appropriately) against the allegation that there was “severe and widespread antisemitism in Labour” but then (foolishly) said he had never seen any at all.  Unbridled support for Israel exists throughout the western establishment (which is very racist) and he would have been wise to focus much more broadly.

Along with Hodge, another Labour MP, Ian Austin, who heckled Corbyn as he apologized in parliament for Labour’s role in the deaths of hundreds of thousands of Iraqis (“Sit down. You’re a disgrace” shouted Austin) has also led the attacks on Corbyn.