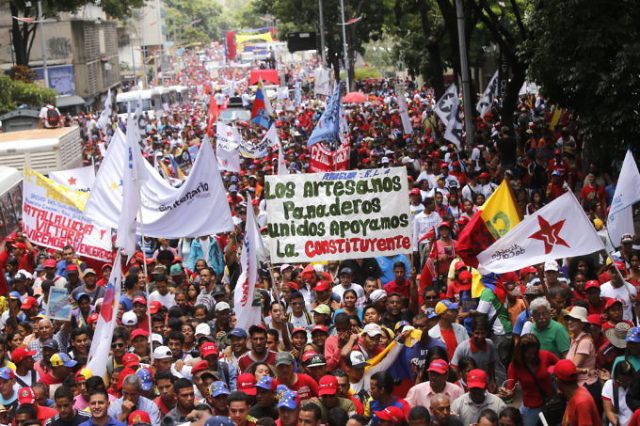 These are turbulent times in Venezuela. The opposition has gone all-in on their soft coup attempts, whose main ingredient is violence and death in the streets. Chavismo, despite the crisis of recent years, has mobilised en masse to defend the revolution. President Maduro’s call on May 1st for a Constitutional Assembly has taken everyone by surprise. To understand this process, the risks and opportunities it brings, we have spoken with Misión Verdad, one of the most reliable sources in Venezuela.

In what context does the Bolivarian government’s call for a Constituent Assembly take place?

It comes in the background of several weeks of opposition protests, which take the form of a colour coup d’etat (not quite a colour revolution), after a controversy between state powers. This was a decision of the judicial branch, which was forced to assume some tasks and functions of the legislative body as a result of political paralysis. Then, the anti-political factions of the so-called “opposition” took advantage of it as a trigger for the beginning of the actions that have gone on to this day.

Then on May 1, Workers’ Day, President Nicolás Maduro decides to convene the Original Constituent Power (Poder Constituyente Originario). He does so under the full constitutional authority of the executive power (article 348), imposing and opening a new window which is deeply political. He does so in the context of a climate of open confrontation, which seeks to rule out any political resolution of the conflict. Through hybrid warfare mechanisms, the opposition seeks to move to new stages of violence that culminate either in regime change or in civil war.

How did the opposition react to this call?

First of all, in a disoriented fashion. This process has thrown a wrench into the gears, imposing new political realities, forcing everyone to take a position, and it has also exposed the hypocrisy of the radical elements of the opposition, since they have been calling for a Constituent Assembly for several years.

Now they refuse even to attend the meetings that the government has called. There are two aspects that stand out. First, that any formal political activity by the opposition is nothing more than a vain and opportunistic exercise to achieve “higher goals.” And second, that it has never had any interest in finding a solution, their only goal is the subordination to the powers of global financial brokerage, the empire.

This brings us, thinking of the first question as well, to the bigger picture. Since President Nicolás Maduro won the elections in 2013, he has constantly called for political dialogue in order to avoid confrontation and establish ways to solve existing problems, negotiate what can be negotiated. Even offering concessions when necessary.

With this in mind, the decision to invoke the Original Constituent Power (which, as Chávez used to say, is a continuous process) is a direct consequence of the opposition’s leadership’s will to paralyse, generate confrontation and make a mockery of the political processes.

After four years of searching for dialogue, some even involving the Vatican, these operators have ruled themselves out as valid political players. This has forced the President to hold the dialogue now with the most legitimate, valid and necessary partners to resolve the country’s situation. This is an absolutely valid legal and constitutional interpretation, and necessary in this context. The hand remains open to the opposition should they wish to join this process.

Should the opposition double down on its violent plan, do you think the government’s strategy can work?

It is difficult to predict whether or not it will work, as this is a confrontation between elements of local power (the Bolivarian government and the chavista base) and global, fluid structures with their own agenda, whose actors in the country are only vulgar Intermediaries that are even handling politics with an import/export logic.

There, in part, lies the audacity of the move, and its dangers as well. Thinking in Gramscian terms, “the optimism of will and pessimism of the intellect”, we are entering an unprecedented, unknown, and powerful scenario. On the other hand, we have these very dangerous possibilities based on precedents from other places around the world like Syria, Ukraine and Libya. All in all, these are the same methods that have been in use since late 2012.

In this context, could the new constituent process mean a deepening of the social achievements of the Revolution?

Yes, and from any perspective. Both in terms of formal/legal aspects as well as aspects of the country’s political framework. The National Constituent Assembly of 1999 and the Constitution approved at the time were limited by the structural boundaries of the 1961 Constitution, which did not contemplate any of the constitutional instruments and organic laws that for almost 20 years have been been in place with the Constitution of the Fifth Republic.

On this basis, there is much that can be done to consolidate a number of elements that already deserve to have constitutional grounds, such as the social missions or the need for the national budget to be fundamentally oriented towards social policies (the proportion is currently 71% of the budget). This would also ensure that foundations are laid for an interpretation of economic policy according to this vision, having the actors participating in this dialogue as its main protagonists.