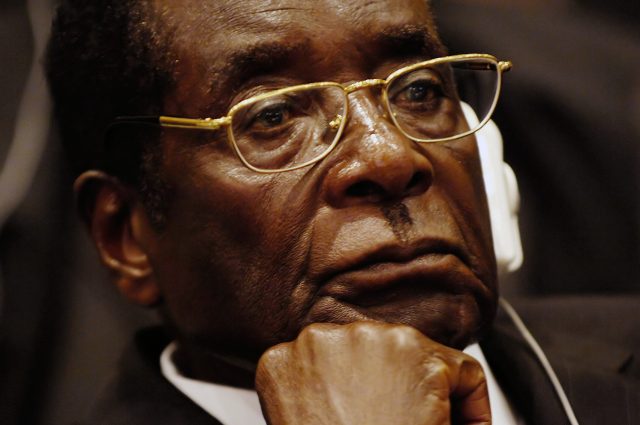 The West, led by Britain and the U.S., have been engaged in a regime policy against the Southern African nation for the last 18 years.

Reasons for examining what is happening in Zimbabwe are many but few to none can be found in accounts by major news media or from liberal progressive pundits. Such accounts are busy reinforcing the over simplified and misinforming narrative that forcing out former 93 year-old president Robert Mugabe marks the end of 37 years of brutal dictatorship that has driven the country into economic disaster.

The over simplified version being fed to the general public is that everything kicked off after Mugabe fired a disagreeable vice-President. Zimbabwe is to be seen as just another African country with a long reigning dictator who presides over the repression and impoverishment of his own people who really are unable to govern themselves without the aid of the benevolent West.

Since the November 14th reports that Zimbabwean army tanks were seen heading towards the capital Harare in the middle of rising tensions between President Robert Mugabe’s ZANU PF and the military, led by one of Zimbabwe’s Vice-Presidents, Emmerson Mnangagwa, the ultimate political outcome is still unfolding. In short, the story has seen Mugabe first put under house arrest by the military, many of his high level supporters arrested, and eventually, after initially appearing to refuse, Mugabe was pressured into resigning to be replaced by Mnangagwa who was sworn into office last Friday.

Unsurprisingly, these new political developments reawakened the Western news media’s fixation with Zimbabwe because the West, led by Britain and the U.S., have been engaged in a regime policy against the Southern African nation for the last 18 years. The accompanying media campaign makes it necessary to look for an honest examination of “What’s Behind the Military Coup in Zimbabwe ” — as in the recent CounterPunch.org article by Greg Elich. Using an assortment of sources that include a September Reuters report claiming to have obtained hundreds of internal documents from Zimbabwe’s Central Intelligence Organization, Elich dispels distracting narratives like the claim that the coup was to prevent maneuvers by Robert Mugabe’s wife Grace from becoming his successor. Elich also challenges the portrayal that “All Zimbabweans… are happy at the turn of events,” explaining why photos and footage mainly showing demonstrations in the capital Harare “aren’t necessarily reliable. Opposition backers predominate in the cities, whereas Mugabe’s support is heavily concentrated in rural areas, where it can have little political effect.”

The rural areas are also where Zimbabweans have most benefited from the fast track land redistribution policy initiated in 2000.

Liberal progressives like activist Bill Fletcher , who also hosts and produces the Washington DC based radio show ARISE, gives progressive cover to old and misinformation and falsehoods about Zimbabwe. In these portrayals it is acknowledged that Mugabe and many of the ZANU-PF leadership are not your typical “African dictator” variety and instead arose from the liberation struggle. But on the November 24th show of ARISE Fletcher buttressed old and refuted lines straight from imperialism’s talking points.

Among these points are the claims that ZANU-PF’s 2000 fast track land reclamation was a failure and only benefited cronies of the party and President Mugabe; that the political and economic mission of the opposition party Movement for Democratic Change (MDC) is unclear; and that the dire economic conditions of the country are due solely to the corruption, irresponsibility, and mismanagement of Mugabe.

It would have been difficult for the show to feature any other angle, given that one of the guests was Scott Taylor, professor at Georgetown University Walsh School of Foreign Service, whose credentials include serving as a consultant for USAID (U.S. Agency for International Development), the African Development Bank, and the World Bank.

Flecther’s other guest was Nii Akuetteh, founding Executive Director of the Open Society Initiative for West Africa (OSIWA), an arm of George Soros’ “network of foundations.”

Much of the misinforming propaganda being resurrected by Western media and reinforced by liberal progressives has been refuted in the 2010 major study, Zimbabwe’s Land Reform: Myths and Realities , by Institute of Development Studies Fellow Ian Scoones, with Zimbabwean colleagues Nelson Marongwe, Blasio Mavedzenge, Felix Murimbarimba, Jacob Mahenehene and Chrispen Sukume. The book challenges five myths through a detailed examination of field data:

Myth 1 – Land reform has been a total failure

Myth 2 – The beneficiaries have been largely political ‘cronies’

Myth 3 – There is no investment in the new resettlements

Myth 5 – The rural economy has collapsed

The book uses evidence to argue that the land reform program may well be the foundation needed for broad based economic efficiency and new livelihoods in the fight against poverty.

The study finds that while production crops for export declined, other crops “such as small grains, edible beans and cotton” for domestic use increased or remained steady. “A core group of ‘middle farmers’ — around half of the population in the Masvingo study areas — are generating surpluses from farming.”

There is substantial agricultural production on small farm holders, with the majority producing enough to feed their families and sell to local markets in good rainfall years.

“Significant investment in the new land has included plot clearings, well digging and home building. In addition, schools have been built, roads cut and dams dug. New market connections are being forged, unleashing a dynamic entrepreneurship in the rural areas.”

We can be sure that the major factor impacting the Zimbabwean economy was not the shopping habits of First Lady Grace Mugabe. This is not to say there was no mismanagement of the economy on the part what is a parliamentary government. The major factor responsible for the spiraling inflation is, however never mentioned by the major media. That would be the pervasive EU and US sanctions against Zimbabwe — a type of warfare without guns and bombs. The hypocritically entitled “Zimbabwe Democracy and Economic Recovery Act of 2001,” a.k.a. ZIDERA, is the U.S. sanctions legislation that explicitly designed to damage the economy by denying any extension of credit and loans to the government or any balance of payment assistance by international financial institutions. They also actively dissuade investments in, or trade with the country. This has had devastating effects on the ordinary citizens of Zimbabwe in multitude of ways, a fact that Western media and liberal progressive pundits never fail to ignore.

The symptoms of these sanctions are pinned on “Mugabe’s economic mismanagement.” Rarely does anyone ask scrutinizing questions like those of Ugandan journalist, Timothy Kalyegira: “Before the Mugabe Government started uprooting the white farmers in 2000, his Government kept inflation at 5 percent, 8 percent (or 11 percent in difficult years.) How, then, does a country with all the same factors and leaders from 1980 to 2000 suddenly (because the white commercial farmers have been uprooted) see inflation soar to world record levels in a space of just six years starting in 2000? And how is it that a stable Zimbabwe has an inflation rate 1500 times higher than Somalia, a country without a government since 1991?”

The Western press is notorious for largely ignoring Africa. So we should ask why Zimbabwe so easily makes breaking news and headlines when the repression and rape of countries ruled by U.S.-allied leaders like Uganda, Rwanda, and Congo goes virtually unnoticed.

The renewed attention is because imperialism’s protracted strategy is apparently bearing fruit. Unable for a host of internal reasons to raise its hegemony through the opposition party MDC, which they literally created and poised to usher in a neo-liberal agenda, current developments seem to bare out the assertion of former U.S. Ambassador to Zimbabwe Christopher Dell who in 2007 wrote in a leaked Wikileaks cable , “Our policy is working and it’s helping drive changes here. What is required is simply the grit, determination and focus to see this through. Then, when the changes finally come we must be ready to move quickly to help consolidate the new dispensation…”

We now seem to be witnessing a “say it ain’t so” moment. Since the resigning of Mugabe and the instatement of Mnangagwa as Zimbabwe’s President, a number of foreign officials have paid “courtesy calls” to the new president, including Britain’s Africa Minister Rory Stewart, who pledged that Britain is ready to strengthen its relations with Zimbabwe and, “On sanctions, I have to be clear, there are now very few sanctions on Zimbabwe. Sanctions are left on a few individuals. The only outstanding question here is of international financial assistance from organizations like the International Monetary Fund and World Bank, but we have already begun discussions to have the embargo lifted.”

Imperialism would hardly make such a commitment unless they were certain their economic interests were secured.

Amid rumors that that land would be returned to large-scale white farmers, Emmerson Mnangagwa declared to the contrary that “the land reform program was unavoidable and shall not be reversed.” But he promised that those white farmers who lost property would receive compensation.

At the moment it looks as if one of only two of Africa’s remaining hold outs from imperialism’s world domination has succumbed to pressure. But there is much more to unpack and the people’s struggle is a story that never ends.

The lessons for the international struggle for self-determination, justice and against capitalist imperialism are always more complicated than we can get from the most readily available sources.

The people of Zimbabwe and the whole of Africa must find a way to forge an expressly anti-capitalist mass movement toward processes of participatory democracy where the people can devise and implement their own social programs that benefit the most disenfranchised classes. Much like the movements that emerged in Latin America and were attempted in Burkina Faso under Thomas Sankara. It would seem this is best safeguard against the aggressions of imperialism. We must concede that the land reform and “indigenization acts” were inadequate measures toward economic empowerment that kept capitalism and imperialism intact. We hope we’re wrong, but the neo-liberalism that now appears to be on the horizon has always in the long run ended in deeper and more sustained misery for the working class and rural poor populations of Africa and the world.

Netfa Freeman is an Analyst and Events Coordinator for the Institute for Policy Studies (IPS), a longtime organizer in the Pan-African and international human rights movement, and former Liaison for the Ujamma Youth Farming Project in Gweru, Zimbabwe. He also hosts and produces the radio show Voices With Vision on WPFW 89.3 FM.

When France Used the Public Debt to Colonise Morocco