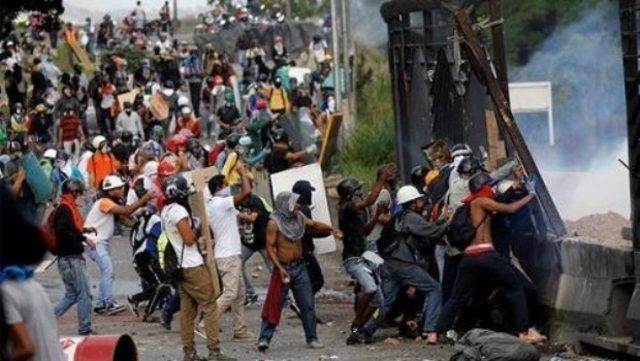 The wars of the XXI Century exhibit the particularity of seeming similar to mobilizations for civil rights. The long experience of the Pentagon in interventions and disciplinary policies on all continents and in every kind of situation, has brought about a conception of wars that is quite distinct from those employed, with greater or lesser success, in past times (including as recently as those of the XX Century).  Humanitarian or climate catastrophes are today one of the so-called risks or threats to security that allow for the mobilization of troops and their intervention in foreign territories, such as happened in Haiti with the earthquake of 2010, where the occupying force of the US Southern Command, when it decided to leave, left installed the United Nations Stabilization Mission in Haiti (MINUSTAH). Humanitarian intervention produced a military occupation that, after seven years, has left a lamentable tally of human rights violations and the infringement of the right of self-determination of the Haitian people.

Perhaps the newest factor of the interventions of this century is their creeping nature. They slither across the terrain in a silent manner, mixing in with the people, destroying community relations and sowing fear, confusion and uncertainty. The explosion comes later. First they waste away the bases of social ties, those that make “la gente” (people) become “pueblo” (a people) with an explicit sense of being a subject with the bases of collective understanding or common sense, through a meticulous endeavor of symbolic undermining, bombarded from the mass media via transmission data and images.

This has been happening for some time and does not sound new, in spite of the fact that it is a way of making war that was only systematized in the XXI Century, combined with the full spectrum strategy (i.e. encompassing all dimensions of social organization and geography) and with the idea of applying all mechanisms simultaneously and without respite.

This form of domination, or of making war, has its inspiration in the study of the behavior of complex systems, which have been established in a natural way, and particularly of bees. The assimilation of the behavior of bees derives into a strategy of attack along the model of a swarm: all at the same time but in different ways and from different directions. A great part of the force of the attack comes from the confusion generated, since those attacked cannot easily identify the source of the offensive, nor can they relax enough to observe or think carefully how to defend themselves. In fact, more than simply a swarm, what happens is a network or a group of swarms: they attack supply, buying capacity, mobility, basic services, neighborhood tranquility, communal organization, common sense, all through a modality similar to what happens when someone kicks a beehive. According to David Faqqard, officer of the US Air Force, this “implies a convergent attack made by many units”. It is a way of making war that does not appear as such, but when underway it is absolutely overwhelming.

Methods such as these, with their particularities and scale, have been employed in Libya and Syria. Always taking advantage of and exacerbating the previously existing contradictions, bringing them to a level of total confrontation that leads to the introduction of additional forces (special mercenary forces), of covert operations and bombardments from the exterior, that not only raise the tension but guarantee the control of strategic locations (oil wells, ports, transit routes). Generally these interventions are combined with scandalous and fragilizing attacks, such as fires in basic infrastructure or hospitals (maternity units, as in Venezuela) in order to create a sense of defenselessness.

To create “situations of war” (Ceceña, ALAI 495 and 500) such as these is highly profitable. In general, as the attacks are rapid and devastating (and relatively unforeseen), they allow for the seizure of resources or valuable territories that regularly continue to be exploited in benefit of the attackers. In addition, in this situation, there is a constant and growing need for arms and other goods, among which are basic foods or medicines, that have to be acquired in the exterior due to the undermining of conditions of internal production, if these had existed. It is good business from every angle.

The sale of arms is no minor feature. Saudi Arabia alone has acquired 110 billion dollars in arms to consolidate its position as the axis of the so-called Arab NATO and the new governing team of the United States has multiplied its pressure in various fora to boost the buying of arms from its factories or those of Israel.

War is the most profitable way to dispute territories, wealth, routes, profits and spaces of power, and it is a highly efficient way to impose discipline.

Between peace and war

So no one is surprised if they hear that Venezuela is the Syria of the Americas, but this is a rash affirmation. In Syria there is a full-scale war, with weapons, bombs, displaced population, assassinations, a dispute for territories and all the derived effects of a situation of open armed conflict with multiple fronts and enormous complexities, due to the fact that Syria is the epicenter of a bellicose conflict that involves a very broad zone, covering the region of the Middle East and part of Europe and North Africa. Moreover, the war in Syria is a manifestation of the dispute between the United States, the potential or veiled coalition between Russia, Iran and China, and perhaps Europe undergoing reconstitution, with the differentiated involvement of almost all of the states in the area, making up the scenario of a potential world war.

A war is being waged on Venezuela, which is one of the main links in the world energy chain, but in Venezuela there is no war. Venezuela is a scenario of struggle between the building of peace and war. Three important elements have been able to hold off war:

1) the Venezuelan process is being defended in the streets and neighborhoods by an organized people; the Bolivarian revolution is of the people.

2) the process of construction of the so-called civilian-military unity has led to a bond that commits both parties to a differentiated but shared defense of what remains in the name of the Bolivarian Revolution, and that in this case includes, among other things, the defense of life;

3) the more the Venezuelan conflict becomes tense and places greater emphasis on the goal of overthrowing President Maduro, the more it appears to be creating a collective government that sustains but dilutes the presidential figure and gives greater solidity to the representation of the state.

These three elements playing together have generated the possibility of confronting the war without making war, of confronting the violence with community organization, of inventing peace militias in daily practice. The process, without a doubt, is being worn down. But there is also no doubt that it has been strengthened and radicalized. To maintain a prolonged situation of siege and violence without using weapons even for personal defense is a sign of elevated conscience and responsibility, both of the state security bodies and of the civilians engaged in the struggle. Venezuela is today both the threshold and the dam for the extension of the wars of other continents towards America and a point of strategic definition of the outbreak, or not, of a third world war.

Ana Esther Ceceña is coordinator of the Latin American Observatory of Geopolitics, of the Institute of Economic Investigation, at the National Autonomous University of Mexico (UNAM). She is a member of the Council of ALAI.

(Translated for ALAI by Jordan Bishop).

The semantics of intervention: dismantling the Almagro report – a special analysis