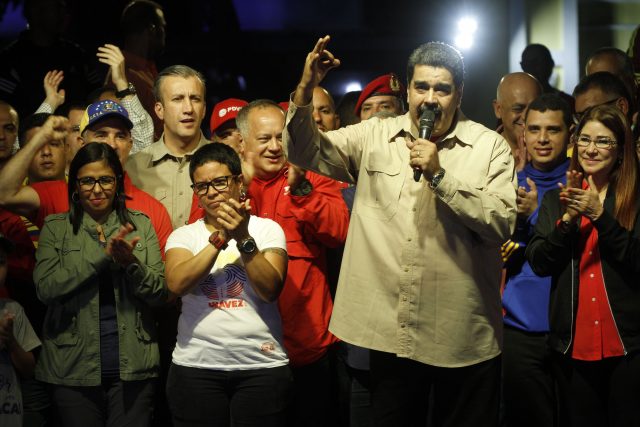 The political capital of Chavismo has not been eroded.

In its first bulletin, the National Electoral Council (CNE) announced the participation of 9,139,564 voters, 47.32 percent of those registered in the electoral roll. Although the results of several municipalities in the country had not been defined at the time of the announcement, 97.02 percent of the tally sheets had been processed and awarded more than 300 of the 335 municipalities to Chavismo in this electoral event.

Another relevant fact: Chavismo also won the governorship of Zulia, the demographically most important state in the country whose election for Governor had to be repeated.

In a first analysis of these results it is appropriate to analyze a set of factors:

From the end of July of this year until December 10, in only 140 days, there have been three electoral processes in Venezuela: the election to the National Constituent Assembly, elections of governors and the latter municipal elections. In these three processes, Chavismo has remoralized and re-empowered its electoral mobilizing capacity with clear victories. This is not a minor fact, understanding that the anti-Chavez narrative inside and outside Venezuela consistently accused chavismo of not wanting to measure themselves electorally.

In fact, Chavismo increased its vote considerably in these elections: 945,746 more votes compared to regional elections this year. The opposite happened with the opposition, which fell sharply by 2,103,575 in total votes at national level, which refutes the weak argument of anti-Chavismo about abstentionism on both side, which the private corporate media said was the main factor in these elections.

The mediocre media also repeats the myth that Chavismo did not have opponents in these municipal elections. Another fallacious argument, since multiple opposition candidates ran. This is how Chavismo finished with 3,767,827 votes more than the anti-Chavez aspirants to mayorships, a comparative figure that exceeds the votes obtained by the revolutionary forces in the municipal elections of 2013, the governor elections in 2012, and all of the election won by Chavismo since the presidential elections of 2012.

– The Bolivarian Revolution won 308 mayoralties (92 percent), while the opposition won 25 (7 percent) and only two for other parties (1 percent).

– More than 72 political parties received votes. Jorge Rodriguez, head of the Zamora 200 Campaign Command, at a press conference said this confirms that the opposition participated in the process.

The aspirations of those looking to push Venezuela into a civilian confrontation sponsored by anti-chavism was dismantled in these elections. The power of the vote as a political weapon has managed to contravene the imposition of violence that destabilized Venezuela during 2017. On this particular aspect, President Nicolas Maduro has focused tiressly on seeking electoral ways to prevent the naked violence that has deteriorated the political and social fabric of the country.

3. The electoral readiness of Chavismo

Chavismo once again put to the test their abilities as conveners and electoral mobilizers, establishing their force as an undisputed, very difficult to defeat kind of political force, even in times of economic and social adversity. This implies that the political capital of Chavismo has not been eroded. This result infers, in addition, that the Chavista identity has been reaffirmed as well as the increasingly efficient use of its mobilization structures. It is also noticeable according to the electoral behavior from important social strata, that in Venezuela the economic context does not have a directly proportional impact on the political, although it does condition the climate of a secondary election like the municipal ones.

4. Some statistics are reset again

The Venezuelan opposition and in particular Julio Borges and other anti-Chavez leaders have insisted, even up to the month of November, that the rejection of Chavismo is equal to or greater than 80 percent of the population. The figures of electoral participation and the results that place Chavismo as a loose political majority leave these affirmations without a mathematical basis, a fundamental basis for the propaganda of international media and the sanctions of foreign governments.

Certainly the participation of 47.32 percent of the electoral registry leaves, as has seldom happened in times of chavismo, an abstention higher than 50 percent. This will be an element used by the anti-chavista narrative to delegitimize the results and the vitality of the Venezuelan political system. The most negative electoral precedent was in the parliamentary elections of 2005, when anti-Chavismo withdrew and participation was 23 percent. These municipal elections were atypical in the sense that they were not held in conjunction with the governor elections, which also weakened the convening power of the participating organizations. The last regional elections with the low participation were the regional elections of 2012 with 52.85 percent. For the Venezuelan electoral standards, in these elections the participation was relatively low, but higher than the standards for elections in other Latin American countries whose “healthy democracies” do not receive pressures and sanctions from the big centers of global power. The most emblematic case comes from Chile, where mid-November presidential, parliamentary and regional elections were held and abstention was almost 55 percent.

Chavismo won at least 20 of the 24 state capitals in the country, including the Capital District, Caracas. It won municipalities among the most densely populated in the country (Maracaibo, Barquisimeto, Puerto Ordaz, Valencia, Sucre, among others) and stands in emblematic cities of different states, deepening its political reach in territories that had not seen Chavista victories in municipalities for years.

Chavismo and the opposition political parties remain the two solid pillars of the electoral arena in Venezuela. The electoral results diluted all political aspirations of independent opposition candidacies and others who called themselves Chavistas but ran in parallel. In the case of this second group, they did not significantly diminish the support of the Chavista base to the PSUV and dissident Chavismo showed itself to be a phenomenon with digital presence (in digital media and networks) rather than as a real political force and mobilizer. The most significant case was the victory of Erika Farías in Libertador with 66.17 percent of the votes (491,328), which cleared the doubts about whether the candidacy of Eduardo Saman could contest for a good part of the electoral mass of Chavista Caracas outside the PSUV.

8. Management in the current context

A mobilizing element of Chavismo in these elections has been the response capacity of the central government within the framework of the current economic situation. Despite not being able to fully control the escalation of prices of basic staples, the political and economic management of the government focused on protecting the population through the CLAPs and the Carnet de la Patria, focusing on social programs and serving the population that faces a daily battle with speculation. This undoubtedly was a mobilizing factor of the Chavista vote.

9. Chavismo did defeat the opposition

Prior to these elections, three of the 24 parties that make up the Venezuelan opposition decided not participate in the municipal election: Democratic Action, Justice First and Popular Will, organizations that call themselves the most important within the opposition. With this they tried to create the perception that Chavismo was going uncontested in these elections. However, the vast majority of their local leaders were placed on the ballots for other parties and did not camouflage their participation in this contest, improvising alliances with other organizations and also counting on the logistical and financial resources of their parties, who in theory were not participating. The result of such a fatal strategy was an ambiguous presentation to the electorate of the opposition standard-bearers.

The lack of political cohesion of the opposition is being felt, to the point of maximizing its tactical dismemberment. In these municipal elections, the divisions of the opposition vote among several anti-Chavez candidates competing for the same municipality were evident. The phenomenon of fragmentation was national and this dramatically minimized their chances. The internal struggle in anti-Chavismo due to the personal aspirations of its leaders made it impossible for them to put forward unified single candidacies in many of the municipalities, thereby sacrificing the aspirations of their own followers of winning or maintaining municipalities for the opposition.

Anti-Chavismo continues to grapple with the dramatic effects of its violent escalation earlier this year, which fragmented the opposition across the board from its leaders to its followers. Many of these have separated from the Democratic Unity Table (MUD) because of the violence of 2017, now seeing this organization as politically inconvenient, however many supporters of this coalition have withdrawn support for its leaders once they stopped their destabilizing acts to dialogue with the Chavismo in “search of electoral guarantees.” For this second group, radicalized by triumphalist expectations created, the MUD was “domesticated” by Chavismo and they are now assumed to be “traitors.” Opposition abstention increased the chances for Chavismo in many municipalities.

Many municipalities in the hands of the MUD have passed into the hands of Chavismo, which is also explained by the exhaustion of the coalition as a vehicle for local management. The emblematic case is the Sucre municipality in Miranda state. The political malpractice of opposition mayors, who declared themselves “without resources” and have allowed their municipalities to collapse so as to blame the central government, had the outcome of the “abstention punishment” of the anti-Chavista electoral base. MUD in smaller communities is not a real reference for “change” and improvement of the basic life conditions of the population.

13. The inertia of electoral depression

Anti-Chavismo looks demoralized, politically disarticulated and clearly demobilized. A general sense of uneasiness, which became more pronounced after the regional elections in October, weighed on them during the municipal elections. Opposition people don’t feel driven by their leaders and are generally characterized by political apathy.

President Maduro has been presented as the main Chavista contender for presidential elections next year. Ending 2017 as the leading political strategist, overcoming unprecedented challenges and against all odds. He also consolidated a broad social base that has been remoralized, reorganized and mobilized, after Chavismo was insistently singled out as a political force on the verge of disappearance. Put another way: there are few references that can be said to have made such a political turnaround in the recent history of the country, and Maduro has achieved it.

The call for presidential elections will be determined by the National Constituent Assembly and the dialogues that Chavismo is holding with the opposition in the Dominican Republic. Anti-Chavismo has not consolidated a visible leadership that brings together its political forces with a view to next year, and in fact, the mere fact that this stage of dialogue has begun has deepened its internal divisions.

The challenges of anti-Chavismo are still consolidating a solid leadership and unity, reaching higher levels of tactical and strategic cohesion and, on the other hand, establishing itself as a real alternative force, with a single project. As a political group they have not achieved any of this in 18 years, since they have appeared briefly and intermittently “united”, but now he will have to consolidate everything in just months. Its only real strength is a social base with great discontent for the economic situation.

For Chavismo, the challenges point to the need to restore economic governance, make social protection mechanisms more efficient, relaunch and reinforce the relationship between the leadership of Chavismo and its bases, and on the other hand, to promote the Chavista identity to further remodel its political fabric, which looks revived and organized with the recent electoral victories.