Camilo Mejia and Paul Baker Hernandez : The Duo activist with resilient and out-spoken voices for Nicaragua 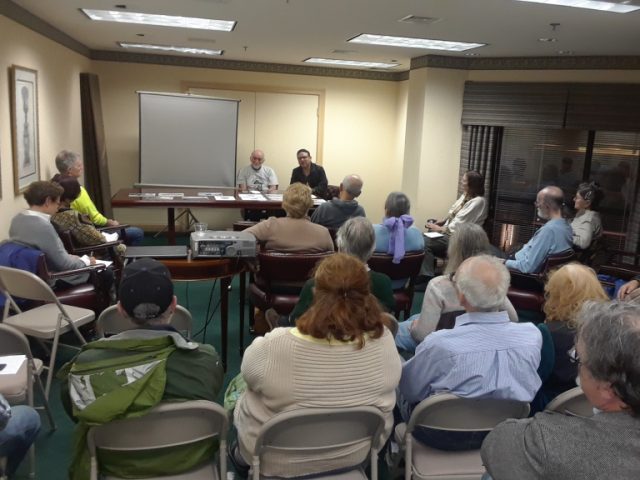 Camilo Ernesto Mejía, spoke alongside co-activist Paul Hernandez to throw light on the problems facing the Sandinista Government and the Nicaraguan People.  Camilo, also a Nicaraguan who left the United States Army during the Second Iraq war on conscientious objector grounds was convicted of desertion and went on to become an anti-war activist.  Paul Baker Hernandez who showed a PowerPoint Presentation of the destructions caused by riots also performed songs at the event. The event took place on Friday, October 19th, 2018. The event was organized by CASA Baltimore in collaboration with LIMAY. Both Camilo Mejía and Paul Hernandez were invited as speakers in an evening and atmosphere charged with activism.

Camilo began by sharing his personal journey from a War Veteran in Iraq to an anti-war hero. He reminisced with a sordid expression and talked about ‘a garbage of bomb exploding in the middle of the road. But he says he feels relieved in the ability to go about life without the thought of being shot or blown up.

He says ‘it gave me enough stability to question not only the war but also my place within the war’. Further reflecting on his years of service in the US army in Iraq, Camilo says that  …” and when it came time for me to return to Irag, I did n’t and said the next day. So one day I realized I should not go back to Iraq”.

He goes on to show that he was not regretful of his decision not to go back to war in Iraq. “Eventually, I came out publicly and denounced the war as oil-driven. I went through court marshall and went to jail for nine months and then I was released by Amnesty International, I was released from Jail in February ’05.

Since then, he has dedicated time as an active member of the Veterans for Peace. He went on to share his other passions and preoccupation and his journey into activism. “I wrote books, for several years I became a speaker and went to conferences, and stayed home for several years. I joined peace and justice movements, and several other movements. I did inter-sectional work and basically trying to understand and bring out how all these basic issues were connected and how our struggles were one and the same”.

He pointed out that these involvements opened his mind wide to critique the issues that affect communities. “I began to really question the war, and really understand how the war has evolved and impact and how the United States has been able to mobilize its vast resources to basically be able to invade and occupy other nations, under the banner of humanitarian intervention,  and peace and stability and democracy and what not”.

Much of Camilo’s presentation became an apologist for the Nicaraguan Sandinista government and his belief that Nicaragua has been painted with the harrowing picture by western corporate news like BBC, CNN, New York Times,  et cetera. He believes that this Central American Country has also been besieged by a ‘coup’ machinated by America’s penchant for ‘Regime Change’. He lamented American organizations such as the National Endowment for Democracy, the Organization of American States, as part of its apparatus to create chaos, instability, destabilize the Nicaraguan Government and isolates it from the rest of the world whilst constantly instigating civilians against the Sandinista government.

” Fast forward in April this year, I began hearing about how the Nicaraguan Governments cut down benefits of retirees.” He referenced the deadly protest across the country due to the controversial pension reforms. ” I began to hear about how the people were taking to the streets and protest and to be honest with you, in the beginning, I supported the protest” Camilo stated. He went on to affirm his position: ” I have never been a Sandinista, and that was not any question, but what the government did was a mistake and they should not be cutting down the benefits of the pensioners. I even donated for persons to be able to participate in the protest until I began to hear people saying that the government was massacring students and the government was basically turning genocidal, and they were burning down its own buildings and Ministry Offices and things like that. I began to ask for evidence, I began to see the footages and images and they reminded me of the President of Syria Basar Assad who was accused of bombing schools in Syria and used white phosphorous in eastern Syria against military targets in civilian areas. (for people who don’t know what white phosphorous is, it is a really terrible weapon of war that burns into the skin and bones.

He bemoaned the narrative by US-financed non-profit institutions and various western and opposition news media, national and international human rights groups as a concerted effort to undermine the Sandinista government in Nicaragua and a ploy towards a ‘regime change’. 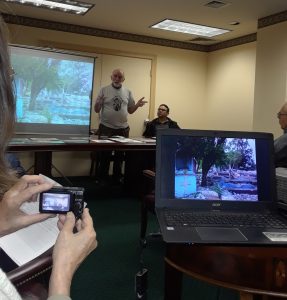 Paul Hernandez buttressed much of what Camilo expressed. Whilst presenting a Powerpoint to the group with graphics and images of the burning down of buildings and Ministry Offices. In describing some of the pictures, Paul remarked that: “People who had no connection with Sandinista were being tortured, were being stripped, being painted in blue and white, and some cases killed including some students”.

“You don’t burn down the Radio Station just because you don’t approve of the program. There were 21 members of staff in the building and they were burning down its own buildings and Ministry Offices and things like that.  Same Process, the same playbook, essentially destabilizing one country after country after another country. Suddenly there is that industrial level of arming peaceful protesters with weapons that there will not afford as students.”

Paul went on to talk about the absolute plunge of social media on WhatsApp groups changing the narrative. Both Paul and Camilo both stood staunchly shoulder to shoulder in support of the Sandinista government in Nicaragua against what they believed is both a coup against a democratic government by US apparatus and western media, that lacks neutrality and the role of US international agencies and organizations such as Amnesty International, NED in fanning chaos in Nicaragua which otherwise would remain peaceful and progressive.

A Specter of Peace Is Haunting Nicaragua