Brazil on Strike: Truckers and Oil Workers Refuse to Cooperate 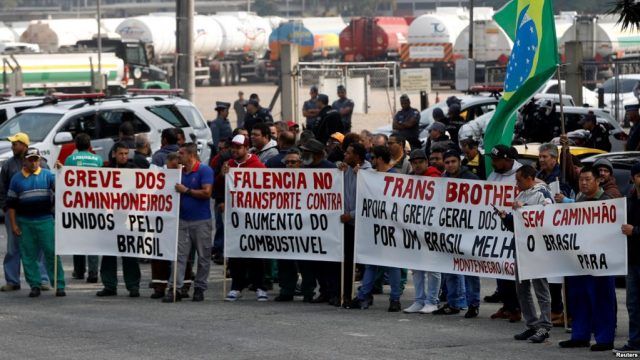 Latin America’s largest economy – Brazil – is on the verge of a breakdown. Truck drivers and oil workers are not on the job. The former have been on a ten-day strike, while the latter are on a 72-hour strike.* Both are angry with the government of Michel Temer. This government, they say, has mismanaged the economy and begun to privatise the crucial energy sector. High level of political awareness amongst these workers leads them to point their fingers at the Temer government and its cosy attitude towards international finance capital.

Recently the OECD (Organisation for Economic Co-operation and Development) published a survey that bragged about Brazil’s increased growth rate by 1%. But this report is totally misleading. It fails to understand the Brazilian economy from the perspective of the average Brazilian.

Prices for basic goods have skyrocketed. The inflation rate is roughly 4.2%. The growth rate of the Brazilian economy is 0.4%. While the economy basically shrinks, in other words, prices rise. This is monstrous for ordinary Brazilians. Fuel prices have been up by 50%, which has had an impact on food prices. Truck drivers are on strike because of this spike in energy costs. Oil workers are on strike for similar reasons. They are angry at the mismanagement in Brazil’s state-run energy company, Petrobras.

Since the coup government of Temer took over in 2016, the economy has experienced a serious lurch. Fealty to international banks has meant that Brazil spends more of its budget on interest payments on government debt (16%) than on education (12%) and health care (12%). There has been no attempt by this government to push back against the creditors, no political will to raise resources from the super-rich amongst the Brazilians. The cost of the mismanagement is borne, therefore, by the working-poor.

The oil workers union understood fairly early that the policy of Temer’s government is to entice foreign direct investment into Brazil by the privatisation of the state oil company. In October 2016, Temer’s government put in place a price policy that ensured that domestic prices would be pegged to the prices of imported oil. This policy went into effect in July 2017. This ensured an unnatural rise in domestic oil prices – by 230%, with gasoline and diesel up by 50% and cooking gas up by 60%.

It is what has created a crisis in the oil sector. The solution, as far as Temer’s government is concerned, is the privatisation of oil. The conditions to make the case for the privatisation do not come from the sector itself, but from clever and deliberate mismanagement that delivers the sector to private hands. Look, the oil minister says, the sector is in bad shape. Solution: privatisation.

Brazil is the largest crude oil producer in Latin America. The production capacity for Petrobras is 2.2 million barrels a day, more than enough for domestic consumption. The management has cut refining capacity – at 2 million a day – down by 70%. It is importing oil at exorbitant prices to fulfil domestic demand. It buys foreign oil at $75/barrel, which is $40/barrel more expensive than oil from the offshore pre-salt reserves. Petrobras is meanwhile exporting its oil overseas.

The import of oil and the mismanagement of Petrobras eggs the government towards a policy of privatisation drift – first it will turn over the refineries to the private sector, then the pipelines and terminals and eventually all of Petrobras. Brazil’s sovereignty in the energy sector will soon be totally compromised.

The workers know what is going on. Their strike is political. That is why the labour court has declared it illegal. They say it is not a strike about wages or work conditions. The court is right. The workers have a broader goal. They believe that the coup government of Temer is destroying not only their livelihood – for which they would be allowed to strike – but also their society.

Workers have not reported for duty on the oilrigs in the Campos basin nor in the oil refineries in the Amazon. The truckers have blocked highways. Energy against this government will feed into the October election. The lead candidate of the opposition – Lula of the Workers’ Party – is in prison. The workers have in mind as they strike. But will the oligarchy allow Lula’s name to be on the ballot (for a full discussion of the situation in Brazil, see the latest dossier from Tricontinental: Institute for Social Research – Lula and the Battle for Democracy in Brazil).

Shares in Petrobras have tumbled not because of the strike, but because private investors worry that the workers will force the government to retreat. What is good for investors is good neither for Brazil nor for the Brazilian workers. Moody’s, the analysis firm for investors, warns that a ‘prolonged strike would create severe credit stress across all corporate sectors’. Moody’s runs a protection racket for the Men of Money. They bless firms and countries that bend to the will of finance capital. Moody’s punishes any firm or country that tries to build an alternative path. Credit can dry up as result. The armies of Moody’s have lined up their tanks around the perimeter of Brazil. Their threats are real. Temer says that he will not send in the military to clear out the strikers from the highways. But the real military is not to come from the barracks. It comes from the shiny glass and steel buildings that house the Men of Money.

The workers have the will to remain on strike. The union has put forward three basic demands: removal of the director of Petrobras (Pedro Parente), removal of the President (Temer) and retention of Petrobras in the hands of the state. The oil workers have called their action a ‘warning strike’. It is a warning because more is planned – a cascading set of political actions that will lead into the October election. Impossible to believe that the Brazilians will take the theft of their democracy lying down.