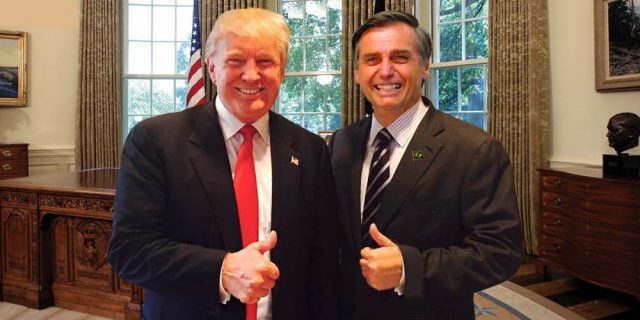 Brazil is going through a crucial time, but the coup already took place in 2016 with the impeachment of Dilma Rousseff. It is not a surprise: barring Lula from running was the logical path towards extremism.

After removing the obstacle that Lula represented, he who brought 30 million Brazilians out of poverty in a few years, it was necessary to consolidate a political system with very frail social bases. Therefore, the current task is to form a government that is even more undemocratic than that of Temer! How? Making it legitimate through the rules of formal democracy. And above all, thanks to US meddling.

In fact, the electoral strategy of Jair Bolsonaro has relied on the good advice of Steve Bannon, who – it should be recalled – is one of the people responsible for the Cambridge Analytica scandal that paved the way for Donald Trump’s victory. Faced with a similar media apparatus and fake news on social media, denouncing the threat of Brazilian fascism under the slogan of a “new Hitler” is not enough. Lula’s final message from his cell, that “in the conflict between civilization and barbarism, everyone should pick a side,” did not have the desired effect in the first round of the presidential elections. The memories of the dictatorship are very distant for the Brazilian people…

Actually, what Brazil has been going through in recent years, with the shady role played by judge Sérgio Moro in the Lava Jato case, the removal of Dilma, the jailing of Lula and Bolsonaro’s electoral campaign, has a common thread: the erosion of sovereignty of a strategic country and US meddling to keep it in its sphere of influence. It is also a matter of offsetting the regional integration undertaken for a decade by progressive governments, and embodied in organisations such as CELAC or UNASUR. According to Manuel Pichardo, Dominican writer and former president of the Central American Parliament (PARLACEN), the Latin American right wing has put the “Atlanta Plan” in motion to put an end to the careers of progressive leaders such as Glas or Lula, using the media to amplify corruption charges and judicial processes. New “soft” coups need to be confronted by the peoples making use of their creativity. As José Martí used to say, their plans should be opposed by another plan.

Right now, the Brazilian people need to decide between two countries: one of reconstruction of popular sovereignty, economic development and protection of social rights. Or one of “privatizations, concessions and de-mobilizations. Everything is for sale,” as Bolsonaro advisor, Paulo Guedes, said in Chicago.

Source: Journal of Our Americas, Investig’Action